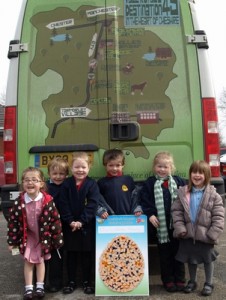 Weather forecast for Good Friday: “Cold, changeable and risk of heavy downpours”. Typical! What to do with two over-excited offspring plus holidaying friends with two more equally energetic youngsters? A combination of school, TV and shop windows has hyped my kids up into expecting Easter to be an idyllic time of hunting for shiny, colourfully wrapped chocolate eggs on green hills, with lambs skipping and bunnies hopping amongst the daffodils. Thank goodness for my stack of leaflets on local attractions. I remembered seeing one promising Cheshire’s longest Easter egg hunt. Eventually I found it, with the aforementioned images of hills, eggs and bunnies (plus a rainbow just in case!).  The egg hunt was taking place at Destination 49, a seven mile stretch of the A49 from Blakemere Craft Centre to Tarporley, calling in at a number of venues and attractions along the way. As this involved hopping in and out of the car and lots of opportunities for refreshments and shelter it seemed just the ticket for a cold and potentially wet day.

The kids collected their egg hunt passports at Blakemere just before 10am. The aim was to have the passport stamped at each of the eleven venues along the A49 and to return them by 3pm. I was, frankly, amazed at the prizes on offer: family days out at Blakemere, the Old Fire Station Chocolate Shop and the BusyBus sightseeing tour; dinner, bed and breakfast at Nunsmere Hall or the Alvanley Arms; 2010 family membership at the Cheshire Polo Club and the Cotebrook Shire Horse Centre; a meal for four at Cabbage Hall, champagne tea for four at the Swan Hotel and a spa package at the Portal Hotel. Not to mention my personal favourite of a luxury hamper and night in a hideaway at the Hollies. Wow! Well that was certainly enough to bring out my competitive side. “Come on, kids! No time to waste! Put that chocolate away and get stamp collecting!”

The egg hunt on the golf course at Blakemere warmed the children up nicely and although they didn’t win the main prizes they were more than happy with their goody bag of Easter eggs. Onto Nunsmere Hall where we were greeted by two pretty little bunnies offering biscuits and handing out a colouring competition with yet another generous prize of dinner for two. At the Cheshire Polo Club my daughter Abbie was thrilled to get the chance to mount the wooden polo horse and imagine herself playing a real game of polo. The Hollies Farm Shop is right next door and we hot-footed it into the warm shelter of their cafe. With four stamps on our passports we felt we deserved a latte. The cafe was filled with children clutching eggs and the air rang with pleas of: “Can I open it, Mum, please!”.

Next stop was Cabbage Hall (a name that has always intrigued me and sounds as if it should be somewhere near Toad Hall). But there were no toads or rats in sight, just a very friendly lady on stamp duty. Abbie plonked herself down in a large armchair and said she wanted to come back because it was “posh”, so we might well be returning when the weather gets warmer. At the Alvanley Arms we were offered a free bottle of wine if we returned to dine sometime and we also met a cute little guy in bunny ears at the bar. (I’ve stopped mentioning all the sweets and chocolate being tipped into the kids’ goodie bags as our dentist would have a fit!). Next door at the Cotebrook Shire Horse Centre I was really chuffed to get a voucher admitting a family. We had been when the kids were much younger and I have been meaning to go again.

I have spotted the sign for the Portal Hotel and Spa before (women have a built-in radar for these things) and it was great to have an excuse to pop in. By the time we left I had a voucher for a free three day pass for the spa and a great picture of the good-natured bunny on reception! At the Old Fire Station Chocolate Shop in Tarporley I got a slightly scary photograph of the shop owner (I’m sure he’s lovely really!) and the kids got a chocolate bunny to add to their stash. We then retired to the Swan Hotel for a long and well deserved lunch with our friends and also managed to get the last two stamps on the passport from the Swan and the BusyBus parked outside. I have to say under no duress that lunch was delicious. We grownups had a lamb curry and the kids were well catered for with homemade chicken goujons (not a chicken nugget in sight) and burgers. With four lively children having an impromptu design a beer mat competition it was great that it was such a welcoming and informal atmosphere.

We returned to the start of the trail well ahead of the 3pm deadline and handed in the completed passports. I was feeling lucky – with that number of prizes we were bound to win something! As I was there in a dual role (taking part and photographing the event), I got a prime position at the grand prize draw. Well, I was just under the shelter of the gazebo. One step back and I would be soaked in a deluge of water running off the roof. Have I mentioned that the forecast heavy downpour had arrived just as the Easter egg hunt ended? Being hardy Brits we ignored the raindrops dripping off brollies and noses and got into the spirit of the event. The Mayor of Northwich, Clr Helen Burder, announced each prize and subsequent lucky winner and was met with an enthusiastic cheer each time. Local primary schools had each decorated a large egg to display at the venues along the route and the Mayor awarded St. Wilfrid’s Roman Catholic Primary School a prize for the best decorated egg.

We didn’t win anything but I put on a brave face for the children. You can’t tell them that it’s the taking part that matters, not the winning, if you go into a major sulk yourself! And really, we were all winners in the end. The kids had heaps of chocolate and an apple and carrot courtesy of the Hollies and we had numerous vouchers for freebies. I’m already booked in at the Portal Spa and looking forward to a free bottle of wine at the Alvanley Arms after a visit to the Cotebrook Shire Horse Centre!

Destination 49’s Easter Egg Hunt was in support of CRY (Cardiac Risk in the Young) on behalf of Eaton Primary School. For further information visit www.c-r-y.org.uk.