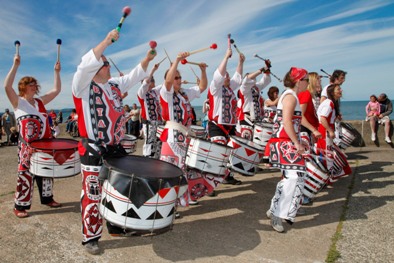 Wrexham will be engulfed by an explosion of sound and colour next month when it celebrates with people who fled their countries to find a home and safety in North Wales. Refugee Week (June 18-26) is part of Wrexham’s Year of Culture, and will be launched in North Wales’ major shopping centre, Eagles Meadow, the main sponsor for the Year of Culture. From the pounding drums of Batala Bangor to African, Portuguese and Polish music, to football and a taste the world lunch. Even football is on the menu according to one of the organisers, mature student at Glyndwr University, Mark Hill Reynolds, who also helps at the Wrexham Refugee and Asylum Seekers Support Group.

Mark said: “Wrexham is well known for the welcome it gives to people from all over the world. From the Polish community which developed out of the hospital in Penley to the newer arrivals fleeing persecution in Mugabe’s Zimbabwe, Wrexham has always stepped up to the mark and made them welcome.  Refugee Week is an annual event lead by the Welsh Refugee Council and is an opportunity to celebrate the contribution made by refugees to life in the UK. It will also give refugees and asylum seekers the opportunity to meet members of their local community and share their stories and experiences.

The chance to make friends is often uppermost in the list of requirements for a new arrival in Wrexham. Wrexham is a Home Office dispersal area. When someone claims asylum, they are ‘dispersed’ to privately owned accommodation in one of the ‘Dispersal Areas’. The people who arrive here have no choice in the matter. One client recently commented ‘I’m glad they didn’t send me to London, I think I would have been very unhappy. The people of Wrexham are so nice and so friendly that I want to live here if I am allowed to stay in the UK’. Once someone is granted refugee status, they have the same difficulties with accommodation and employment as any other member of the community.

In difficult economic times, the problems can be felt more acutely due to the fact that many Refugees have no family or friends in the area to which they have been dispersed. Contrary to popular belief, there are only around 60 asylum seekers in the Wrexham area. The number of refugees is more difficult to estimate as many have moved to Wrexham in order to find jobs, some are here to be reunited with family and, of course, the members of the Armed Services from all over the world who found themselves unable to return home after fighting for Britain in WWII.” 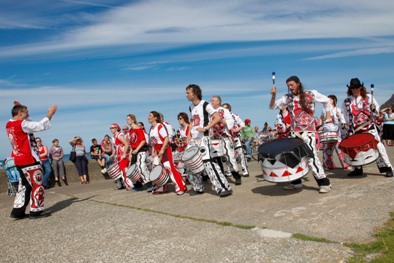 Refugee Week starts on the June 18 with live acts in Eagles Meadow between 12 and 4pm.

On Monday (June 20) a ‘Taste of the World’ lunch will give everyone the chance to sample foods from around the world. An opportunity to take the Citizenship Test at Wrexham library will be held on the Tuesday. A football tournament will take place at Glyndwr University on the Wednesday and activities for children not interested in football will be available free of charge.

A night of African, Portuguese and other World music will be held at L’Etage on Thursday June 23. Friday, again at L’Etage, ‘Skamambo’ from Poland will be providing live music and ‘Babyfather’ sound system from Trinidad will keep the dancing going into the early hours. Another football tournament will be held at Ellesmere Port on Saturday June 25. Batala Bangor, who can be seen at Eagles Meadow,  has evolved from Samba Bangor Community Music, which was formed in 1995 to promote the spirit of carnival and its associated arts in North Wales, with percussion based music. Its inspiration comes from the songs, rhythms and culture of Brazil and the Latin world. 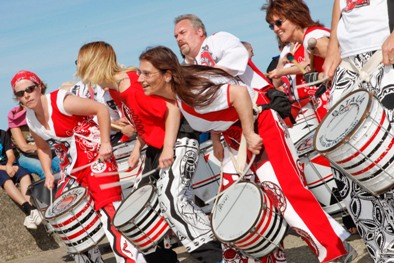 The Big Beat are four young men who have performed an eclectic mix of rock, soul, pop and blues at venues such as Murrayfield Stadium Edinburgh, Old Trafford, the Millennium Stadium, Cardiff;  Birmingham NEC, Earl’s Court, London and The Cavern, Liverpool, over the past decade, as well as Turkey, Canada, Germany, Holland and Milan. They even appeared at the Tsunami Fundraiser 2005 with musical legends like Eric Clapton and Jools Holland.

Also booked for the week is Tacsi Crew, a four piece bilingual band from Anglesey, Polish band Skambomambo which fuses its own original brand of Ska with other genres like rock, pop, punk, and funk and TrenchCity, The Ready Get Set and Future Fresh.

Do you know how parliament in Westminster works? Would you like to know more? Wrexham will be hosting a visit by the Parliamentary Outreach team on 18th June 2011 as part of the launch of Refugee Week 2011 at Eagle’s Meadow. On Tuesday 21st June, everyone is welcome to take the ‘Citizenship Test’ at Wrexham Library and alongside the test, Parliamentary Outreach Team will be delivering training.