Welsh cooks to learn from Michelin masters in Spain 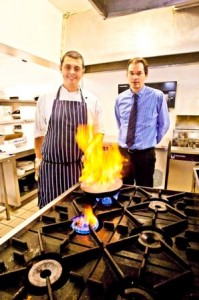 A North Wales hotel is setting up a culinary academy in Spain using its links with the world’s greatest restaurant. The new cookery school on the Costa Brava will be an extension of the four-star Oriel Country Hotel and Spa in St Asaph. It will be located in the heart of Roses, the town which is home to the globally renowned El Bulli, the Michelin three-star restaurant run by Head Chef Ferran Adrià.

Ken Saltrese, principal owner of the Oriel, has owned a house in Roses for 30 years and has spent close to a decade developing a culinary bond between his business in North Wales and the wealth of gastronomic expertise on offer in the town where he spends up to six months of the year. It began when he sent his then head chef to stay at his Roses home and learn from some of the Michelin starred masters who have restaurants there. Mr Saltrese said: “El Bulli is just down the road from where I live. It is a destination restaurant, and we used to go regularly when it had two or three Michelin stars. It is a fantastic place but now it is so famous, I cannot get in any more which is a great shame. But many of the people who have worked there have left to set up their own businesses and I have got to know a number of these chefs. “So I thought about sending our own head chef over to stay at my home to meet these other chefs. Being a chef is a difficult job, it is hot and sticky and they work like hell and they only see the four walls around them for hours on end and so one of the things I wanted to do was to get our chefs out from there and let them see what else is going on elsewhere.”

Since that time, he has sent five chefs to the town, including Salvatore Tassari, 28, the Oriel’s current head chef who will be in charge of running the new school. There they have had the fantastic opportunity to be taught by masters of their industry who have learned their skills in the kitchens of El Bulli and now run Michelin starred restaurants of their own. Mr Tassari came to Britain from Naples in 1991 aged 10. He has worked in Michelin starred restaurants in both Britain and Australia, including the Chester Grosvenor Hotel, and he has his own memories of being in the heart of Roses’ culinary culture. He said: “It is absolutely fantastic, amazing, that this little town on the coast near the border with France, how much quality is there food wise. It’s amazing how many good restaurants are there. I was overwhelmed by that side of things.” Now he is keen to share his Roses’ inspired experiences with both young professional chefs and amateur cooks at Oriel’s new school. He said: “Cooking is a passion and a part of life for me, from growing up in Italy where food is a big part of the day. Sometimes when I see friends of mine and they have no idea how to cook, it pains me! Just to show someone how to cook something properly in a pan, or cook an egg, it gives me pleasure. It helps them feel good about themselves too.” 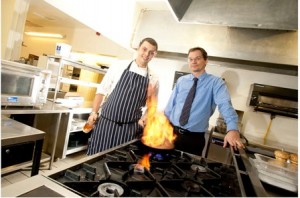 The aim is to launch the new school in the Autumn and run a course for 8-10 people. Guests will stay in beachside apartments and their class room will be a fully equipped catering kitchen borrowed from one of Mr Saltrese’s chef friends whose restaurant will still be shut for the winter months. Following various classes from Mr Tassari and guest chefs from the Roses’ region, the student guests will be encouraged to sample the fabulous food and drink found in the area. Mr Saltrese said: “Over the seven or so days that people are there, they won’t be just in the kitchen working all the time. We want to combine it with a flavour of Spain, tasting the cuisine and enjoying trips to the fabulous vineyards.”

If the courses are successful, the future aim is to buy a farmhouse style property in the countryside close to Roses from where the school will be run alongside luxury style accommodation and a spa. Mr Tassari, a father-of-one, said the new school will be a fantastic new career opportunity for him. He said: “It is going to mean a lot of stability for myself in the future and for my family. I have always wanted to own my own place but I feel like I don’t really need to now because there is always something to look forward to with my job at Oriel.”

His boss, Mr Saltrese, who lives in Pinner, north west London, bought the hotel, on Upper Denbigh Road, 13 years ago in partnership with his nephew, Gary Seddon. Mr Saltrese said: “When we took it on, it was falling to pieces. It was shabby, dull and lifeless and we have spent some millions doing it up.”  The hotel now also has its own gastro pub down the road in the village of St Asaph called The Bridge where much of the Roses’ inspired cuisine is featured on the menu. 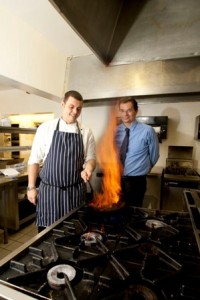 The culinary school, which is the latest venture for the hotel, embodies one of the most important aspects of the Oriel Hotel’s business ethos – training and development for all dedicated members of staff. A former director of personnel for Rank Xerox, Mr Saltrese had responsibility for a £30 million training and development budget. He saw first hand the importance of investing in your employees and he has taken this very personally in his own business venture not just for his chefs but for all those who help run his hotel. His education principles are shared by the man he employs to run his hotel for him, Justin Tilley, who has worked in the industry all over the world, including Africa and Germany. Mr Tilley, 43, who is married with two children, said: “A large portion of our budget is training and to decide who to train and how to train them. If a member of staff finds something they are interested in improving, then we will invest in them.”

Now by giving their own head chef a new chance to emerge from Oriel’s kitchens, they are in turn giving others with a passion for good food and cookery a unique chance to learn and develop.