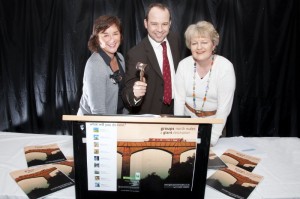 Television antiques expert Adam Partridge who stars in the hit series, Flog it!, is taking on a new role – selling North Wales to tourists. Adam is working with Tourism Partnership North Wales on a new campaign to attract groups, coach parties and cruise ships to the region. He’ll be giving after dinner speeches and taking visitors on tours of historic houses, casting an expert eye on the antiques on show. The campaign is part of a major marketing drive to celebrate the giants of North Wales.

Central to the campaign are giants of culture, history and nature or man-made giants like the award-winning Hafod Eryri at the summit of Snowdon and the Pontcysyllte Aqueduct and Canal. A colourful brochure has been produced and the Groups North Wales website has been updated and improved. It’s hoped the campaign will generate around £500,000 in extra spending by visitors.

Adam, who runs his own auction house in the Macclesfield area, has been a regular on television for the past 12 years. He has worked on Cash in the Attic and Bargain Hunt, joining the Flog it! team 10 years ago. Adam said: “Very often the story or the owner’s story are more interesting than the object itself. Antiques programmes are wall to wall on television at the moment which demonstrates the potential for what we’re doing in North Wales. I’m really looking forward to my new role and I’ll be able to offer my comments as we tour the historic houses. North Wales is a place of great beauty. I know all the major towns and so it should be really exciting.”

The brochure has been produced for Tourism Partnership by North Wales Tourism. Their Marketing Manager, Fiona Gresty, said: “This year the brochure is more like a magazine so there are articles in there to really entice the reader to come to the area. I’m thrilled that somebody with Adam’s profile is involved because it most definitely gives us credibility as a destination for antique lovers.”

Tourism Partnership Marketing Executive Carole Startin said: “This is an important campaign for us because it’s aimed directly at the travel trade. The idea is to give them a lot of new ideas on the type of things that we’ve got to offer in North Wales. I think if they haven’t been to North Wales they  most certainly should and if have been to North Wales before then hopefully we’re giving them some refreshing new ideas about places they can go. The involvement of Adam Partridge came about because we were looking at new shore excursions for cruise ship passengers who dock at Holyhead. Because Adam has his own auction house he has a wide-ranging and eclectic mix of knowledge, rather than specialising in one narrow area of expertise. The world of antiques is becoming an increasingly popular pastime through the myriad television programmes on the subject and the proliferation of car boot sales and charity shops being targeted by bargain hunters.”

More information can be found at: