Now that spring has sprung, there is no better time to visit the pretty Riviera dei Fiori or Flower Riviera located on Liguria’s south-westerly coast. In May and June, visitors can experience the colourful flower blossom unique to this coastline and venture off-the-beaten-track to discover the rural interior and some of the many medieval villages and towns, each with an interesting history.

The capital of the Riviera dei Fiori, San Remo, also known as the ‘City of Flowers’ is home to many beautiful parks and gardens, richly endorsed with many species of flowers from all over the world. The city is surrounded by greenhouses that export carnations, jasmine, buttercups, bougainvillea and multi-couloured geraniums across Europe and beyond. The thriving flower industry provides employment for many Ligurians and offers a dazzling spectacle for any visitor to the region. The flower market is located approximately six kilometres east of the town and is one of the most important flower markets in Southern Europe offering a complete range of cut flowers, foliage and leaves.

Whilst many visit San Remo for the pretty gardens and coastline, the ancient heart of San Remo, La Pigna (meaning Pine Cone) is a tight cluster of streets that lies north of the Corso Matteotti and one of the town’s most atmospheric areas. Clinging to a hill, the area of La Pigna has long attracted photographers and painters from around Italy and beyond who come to capture the unique shades of the buildings at various times of day. 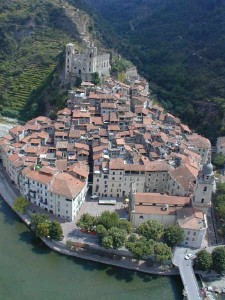 Nearby Cervo is an attractive medieval town where artisans ply their trade in narrow cobbled alleys. The beach is less crowded than some of the more touristy neighbouring towns and the hills towering high over this sleepy fishing town offer a still and untrodden setting of pine trees and olive groves. Apart from the sight of the majestic San Giovanni di Battista church, arguably one of the most important examples of Baroque architecture in the region, the beauty of Cervo is its untouched Mediterranean simplicity and laid-back way of life.

Just east of San Remo, the hilltop town of Bussana Vecchia is more than 1000 years old and makes for a fascinating day trip. This once abandoned ghost town devastated by an earthquake in 1887 was repopulated by bohemian artists during the sixties who came to restore the village and use the abandoned houses as workshops and studios. This has since led to a bitter feud between the artists and the government about ownership of the properties with the government wanting to turn the town into a state-owned area and the residents claiming ownership for themselves.

Back near the French border and set in Liguria’s rural interior lie the villages of Dolceacqua, Apricale and Triora. Dolceacqua survived for centuries on the production of olive oil but in more recent times wine-growing has developed rapidly with the production of Rossese di Dolceacqua. The town itself has many archeological remains which bear witness to the successive occupations since the Iron Age. Of the castle built in 1151, only the ruins remain perched on a rocky ridge that looms in a dominant stance over the village. 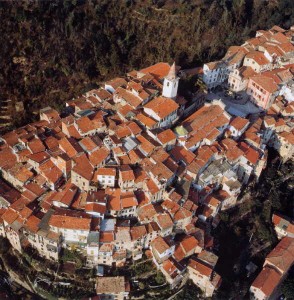 Apricale is the oldest hilltop village in the valley of Nervia, approximately two hours drive from Genoa. It is one of only seven villages in Italy to be given the ‘most beautiful’ status and ideal for couples keen to explore the surrounding countryside, ancient castle and exceptional local restaurants. Nearby Triora, is also a worthy frontrunner of the ‘most beautiful’ list and is set in the Argentine Valley surrounded by dramatic mountain scenery. Much of the architecture dates back to the 12th century, but its period of greatest fame was during the 16th century when a number of witch trials were conducted by the Inquisition. Triora boasts an interesting museum of witchcraft which has earned Triora the ‘Town of Witches’ title.  This twinned with the ancient buildings and crumbling walls provide an ideal setting for the imagination to run wild.

British Airways flies regularly from London Gatwick to Genoa, prices starting from £60 one-way in May including all taxes and charges.

RyanAir flies from London Stansted to Genoa on a daily basis, prices starting from £57.98 return for flights departing/returning in May.