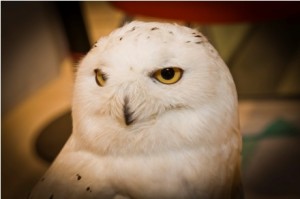 Owls with a wit to woo are taking off as the latest must-have for high-flyers getting married. While some brides and grooms choose unusual cars, off-beat music or different locations to make their big day even more special, increasing numbers of couples are choosing to say it with feathers. And among the chief guests at these weddings are either Whisper and Womble, two  barn owls who have been specially trained to fly up the aisle and deliver those all important rings.

The duo has been taught by Islwyn Jones of Pen-y-Bryn Falconry to fly through the church and deliver wedding rings. They will be on display as part of the modern wedding package this weekend (Saturday, February 19 and Sunday, February 20) at the Debenhams Wedding Fair in their store at the Eagles Meadow shopping centre in Wrexham. Katie Wilkinson is Debenham’s wedding gift advisor, who is organising the two day show aiming to increase what is already a valuable business sector for the company, offering everything from the complete clothing package, to gifts and invites.

‘My Big Fat Gypsy Wedding’ the surprise hit for Channel 4, may feature gargantuan dresses costing a staggering £15,000, but Katie, from Wrexham, says they can make a bride look stylish for considerably less, between £150 – £350 for a bride’s dress. Owls acting as pageboys and delivering wedding rings have featured on My Big Fat Gypsy Wedding, but it is something Islwyn came up with first years ago, since his barn owl flew into the Ruthin register office to deliver the wedding ring for his own daughter Jenni. 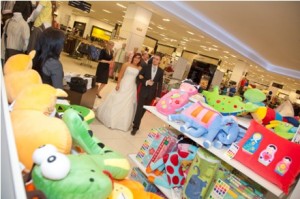 From his farm at Llanfihangel Glyn Myfyr, Islwyn said: “It was a long time ago now, a falconer friend of mine suggested it when we were messing around and sending small packages to each other tied to the birds. The birds never get put off, they are completely bombproof. We will have the birds with us both days at the Debenhams wedding fair to show people how they work, including Myfanwy, who is only six months old and making her first public appearance. It takes a long time to train them up. I know some people do it by keeping them short of food but I don’t. I get them used to me, they watch TV with me and are around me all the time. They imprint on me, I’m their partner and they have full facial recognition and can pick me out.”

Islwyn found the owl ring delivery business literally took off when some celebrity footballers decided to include it in their services. He keeps the arrangement between whoever hires him and the person to whom the bird must fly with the rings – “It’s not always the best man,” says Islwyn – that way it is a tremendous surprise for the guests. But when the bird has delivered the rings, Islwyn, who has probably gone to the church in disguise and has an assistant to tip him when to release the bird, is quick to get out of the way. “If you leave the bird inside it can steal the limelight from the bride and that would never do!” he said. He does stay around afterwards however so that people can take photographs. 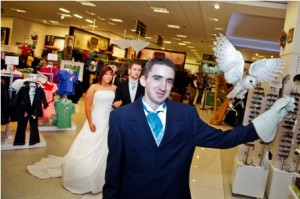 If the owls brighten up a predictable wedding ceremony, magician Rob Chapman, from Four Crosses, near Oswestry, can entertain and play mind games at the reception. About a quarter to a third of Rob’s business since going professional four and a half years ago, is weddings. He’s one of the very few magicians in the country who also does hypnosis and mind suggestion. His magic is the close quarter kind, mingling with guests or visiting tables. “I suppose close-up magic became popular with illusionist David Blaine,” said Rob, who also does corporate gigs and private parties. “I try and fit in very much around the bride and groom and their requirements. I can walk around meeting guests, fill in while drinks are being served, visit the tables or do something from the top table. I don’t need many props, just what I carry, a few coins or some cards. I can include hypnosis, which has had a very bad press, but I do not do any of the rude and crude stuff, there’s no need for that and it’s not appropriate,” said Rob, who is already booked for half a dozen weddings from now until spring.

Katie says the wedding fare will run from 10am on Saturday and 11am on Sunday with 20 specialist exhibitors from photographers to specialist car hire – Chester-Rolls will have a vintage Rolls Royce parked outside – from Islwyn’s owls to the sleight of hand from Rob Chapman.