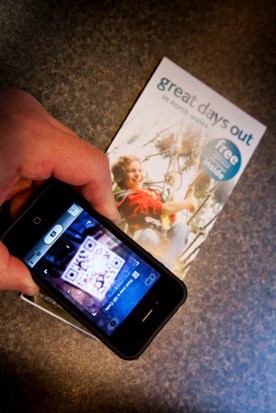 Top tourism sites in North Wales could soon have their own special bar code – even  a castle. The hi-tech QR or quick response codes can be scanned with a mobile phone to swiftly direct a visitor to a website. The technology is being adopted by Tourism Partnership North Wales, who are responsible for the strategic development of the region’s visitor economy. They have included a QR code on a quarter of a million Great Days Out leaflets to be distributed across North Wales, the North West and the Midlands. The code can be scanned with a smartphone and direct the user to a website with up to date information about the attractions.

Carole Startin, Marketing and Events Executive for Tourism Partnership North Wales, said: “It’s a wonderful tool and you can create your own QR codes very easily. “It means you can encode a business card, an address or details of the attraction such as opening times and other information. You can put QR codes on anything – it could be on an attraction, a building or even the side of a bus and a simple scan with a smartphone will direct the user to the encoded information or website. It has the potential to unlock any information you wish including video and audio – it could be bus timetables or places to eat and drink or accommodation. It’s an immediate link between a place and a website. And the information can be constantly updated so that a leaflet with a QR code on it doesn’t become outdated when admission charges or opening times change and that will mean a longer shelf life, lower print costs and less waste.”

The QR code on the Great Days Out leaflet directs smartphone users to  www.gonorthwales.co.uk. The code is read by an application either already on the smartphone or easily downloaded to it and which can also be used to create QR codes.

Esther Roberts, Managing Director of North Wales Tourism, said the leaflet would be distributed in February across the border in England with 110,000 going to the North West of England and 90,000 to the Midlands.  The remaining 50,000 were already being distributed across North Wales. She said: “We try to encourage tourism operators not to put dates or prices in the leaflets so that they are not time sensitive – that information can be accessed via the QR code.”

QR codes were first developed in 1994 in the car industry to track vehicles on a production line but they are now used much more widely including for entertainment and transport ticketing as well as for product marketing. Users with a camera phone equipped with the correct reader application can scan the image of the QR code to display text, contact information, connect to a wireless network or open a web page in the telephone’s browser.

Carole Startin added: “They’re a great marketing tool and they can really help the visitor get so much more from the attraction by instantly putting them in touch with anything from a web page to a Youtube video – the possibilities are endless. You could put them on the side of a tourist information centre so that even if the centre was closed visitors could still easily access information. They could be directed straight to the relevant website without having to search through Google. We are actively encouraging attractions to use them and I know GreenWood Forest Park are going to include a QR code on their 2012 leaflet and some attractions consortia are looking at using them too. It should be a huge money saver and a huge print saver because you won’t have to print as much or as often. The key is not to link to a website home page but something really interesting for  customers – a video link, a special offer, an event, your online shop – the list is endless, but also to ensure the wording underneath the QR code is inviting and interesting. It’s a good idea to put QR codes on entry tickets or feedback forms, in a cafe or shop, or even on till receipts.  Be inventive – they only take minutes to create.”