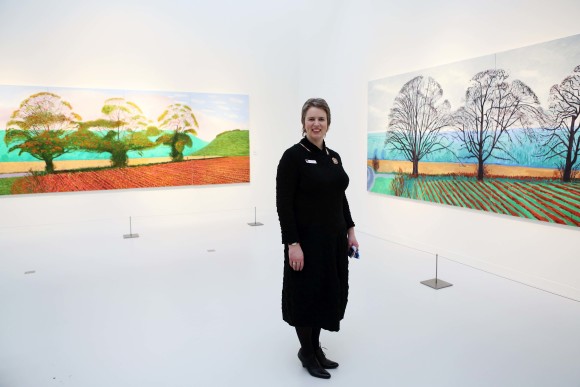 Vincent van Gogh sold only one of his own paintings during his lifetime but since his death, 125 years ago, the artist has proved an inspiration to many people. Thirty of Europe’s leading art institutions will host exhibitions and events during 2015, celebrating his life and work as part of the Van Gogh 2015: 125 Years of Inspiration programme.

The artist was born in Zundert, the Netherlands, and lived from 1853 to 1890. His birthplace lies within the province of North Brabant, a region whose history and culture is celebrated in Het Noordbrabants Museum, part of the Museum Quarter in the Dutch city of ‘s-Hertogenbosch.

Het Noordbrabants Museum and the neighbouring Stedelijk Museum ‘s-Hertogenbosch underwent major renovations, costing €52m, from 2010 until early 2013. They are now physically linked and have more than 5,000 square metres of floor space. Princess Beatrix of the Netherlands officially re-opened the museums on 24 May 2013. More than 200,000 visitors entered Het Noordbrabants Museum during 2014.

Until 26 April 2015 the exhibition Design from the Land of the Potato Eaters – Designers meet van Gogh will be on display at Het Noordbrabants Museum. Curated by Yksi, the exhibition examines how farmland, nature and simplicity influence contemporary design. Those are three of the themes present in work produced by Van Gogh while he was active in Brabant. The exhibits include photographs, textiles, graphics and food. Work from recent graduates will be shown alongside well-known names, including the likes of Piet Hein Eek and Maarten Bas.

For a period the design exhibition will run in parallel with Hockney, Picasso, Tinguely and Other Highlights from the Kunstsammlung Würth. More than 60 pieces from the highly regarded Würth art collection will be loaned to Het Noordbrabants Museum until 17 May 2015. They include the paintings Picador and Smoking Woman by Fernando Botero plus Anvil, a sculpture in bronze by Henry Moore.

One of the galleries exhibits landscapes painted by David Hockney. The works include Three Trees near Thixendale, Spring and Felled Trees on Woldgate, both painted in 2008. Their use of colour is just one of the aspects indicating how Van Gogh has influenced a key artist active today.

Later in the year two further exhibitions will explore Van Gogh’s work and its legacy.

Around the Vicarage – A Gallery Full of Van Goghs will be held from 3 October 2015 to 10 January 2016. The exhibition will examine Van Gogh’s development as an artist during his time in Brabant. Many of the themes that he explored – such as peasant life – recurred later in his career but his use of colour was significantly more exuberant in his later works. The museum’s own collection will be added to by loan items.

A parallel exhibition, Where is Van Gogh? questions how his work influences artists and designers at work today, looking at how his works are used in products. Has he become a brand and have Van Gogh’s works become commoditised? The exhibition will invite onlookers to draw their own conclusions.

Het Noordbrabants Museum is the only place in Brabant permanently exhibiting original works by Van Gogh.

Museums and galleries in Belgium, France and the Netherlands are participating in the Van Gogh 2015: 125 Years of Inspiration programme.

Within the Netherlands, Van Gogh Year 2015 is being marked by events and exhibitions held in the provinces of Brabant, Gelderland and Holland.

Brabant celebrates being Van Gogh’s homeland and has sites of interest in Zundert, Tilburg, Etten-Leur, Nuenen and ‘s-Hertogenbosch.

Het Noordbrabants Museum (Verwerstraat 41) is open from Tuesday to Sunday from 11am to 5pm (excluding select public holidays, such as King’s Day on 27 April). See the museum’s website for entry prices.