More to the Catalan Pyrenees than skiing.

To ski or not to ski? Go once and you’re hooked for life, that’s what they say…I was not one of those kids that went skiing with parents every winter and I never made up for the lost time as a teenager. So when I did eventually get on the piste for a week at the grand old age of 30 I felt, and proved to be, totally useless. I managed to go through all the scenarios, from falling off the lift to rolling down the slope, followed by weeks of limping. However tempting it was to write-off the mountains in wintertime from that experience onwards, I decided that was all a little too easy. Surely there must be something in the snow for those with a ski phobia?

It was with that thought I started packing my bags for a trip back to the mountains. The Catalan Pyrenees to be precise; one range spread out over two nations; France and Spain where three languages are spoken, Catalan, Spanish, and French. It was the French side for me, in the small mountain village of Font Romeu just an hour away from Perpignan and part of the Neiges Catalanes which consists of 8 mountain resorts. 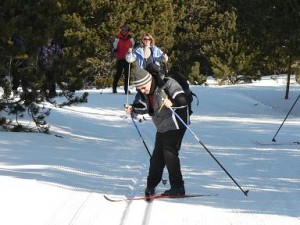 The decision not to ski means no ski lifts either, as I soon discovered, finding that most mountain fun involves hard labour. Whether on snowshoes or cross country skis, you need to make an effort (going up) in order to ‘earn’ the fun (going down). Set your mind to it and it’s definitely worth it, perhaps it’s even more fulfilling in the end? It was time for action and my first adventurous outing was a hike on snow shoes.

With spikes giving plenty of grip you can get nearly everywhere on snow-shoes, whether you stay on the tracks or venture off piste. Our guide surprised us after an hour of struggling in the knee-deep snow by pulling a flask of hot chocolate and biscuits from his backpack. Now that’s always a treat, but on a desolated slope with mountain peaks around you, pristine snow under your feet, and your ears filled with silence, it was truly heaven. Perhaps a hipflask filled with Whiskey would’ve rounded it off, but that might have influenced the next hour of walking downhill.

If it’s not just the fear of skiing that keeps you home in winter, but also the thought of all the exercise, then think again. There are more ways to enjoy the mountains and many other exciting activities to participate in! Ever enjoyed a magnificent sunset on the mountain slope after an exhilarating ride on a snow scooter? Ever dreamt of being in charge of your own pack of dogs and sled? How about horse treks in the snow; Ice-dives in one of the lakes; Snow kiting? Tempted yet? Then the Pyrenees are likely to be just for you.

The region is renowned for being the sunniest spot in France, as well as least cloudy. So it’s only natural this area was chosen to build the world’s largest solar power station, Heliodyssee in d’Odeilo. A sunny view with millions of watts being collected by more than 11.000 solar panels. The museum is mainly in French so bring your dictionary, but you’re free to walk around the premises outside. It’s warm underneath the earth’s crust as well with natural hot-spas scattered around the area. A relaxing treat to the muscles after a strenuous day, and an inspiring treat to the brain enjoying the mountain views from the outside hot pools.

All towns and resorts are bustling with restaurants, bars and hotels, varying in quality and price. One little gem in the town of Les Angles is Chalet Ana. It’s one you’ll have to book in advance as it’s a victim of its own success where people just keep coming back. Built by a French/German couple it’s a totally green and biological option without compromising in quality. Quiet the contrary; it’s very luxurious with an open-air Jacuzzi on the top floor, and a sauna which you can book for a private visit. To top it off they bake their bread fresh every morning at 4am which they deliver at your apartment door before you wake up.

Whether you’re a couple looking for romance, a family looking for variety, or a ski-phobic wanting to try something different in the snow, there’s for everybody here. Although mainly focussed on Spanish visitors at the moment everybody is welcoming and very keen to entice the British to spend their holiday in the French Pyrenees. They try their best to speak English and staff at the tourist office will get you on any activity you like, from the ones mentioned above to a day at the thermal baths to an adventurous ice dive.

Do keep in mind though: Whether you ski or not, you might end up getting hooked for life!