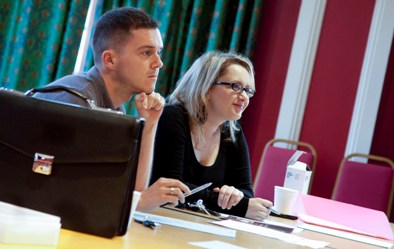 Talented performers from North Wales and the North West are fighting for a chance to show TV star Kerry Katona they have what it takes for a future in show business. There were so many acts turned up at Rhos’ Stiwt theatre – from Conwy to Kelsall – that organisers for The Only Way Is Wrexham, are already planning a second round of auditions.

Creator Lee Kelly, a top producer and choreographer who runs the talent show through his LHK Production company said: “We have had an amazing response, we are seeing dozens of acts today. But we are aware that some people have been unable to make it and we think we will need a second round of auditions so that everyone gets a fair chance to show us what they can do.”

The lucky ones selected from the auditions will go through to the final at the Stiwt, near Wrexham, on June 30 in front of ex-Atomic Kitten and Celebrity Big Brother star Kerry Katona, when the winner will collect £500 worth of promotional material and invaluable publicity. “We’ve had mainly singers and as ever we would really like to see a wider variety of acts to include magicians, dance troupes, and bands. As a choreographer I’m always excited to see new dancers,” said Lee who has worked with many big name stars including Kylie Minogue, Cilla Black, Gerri Halliwell, Martine McCutcheon, Emma Bunton, Boy George, Steps and even Henry ‘The Fonz’ Winkler. A former scholarship student at Laine Theatre Arts, he’s worked on the UK tour of Scrooge with Anthony Newly, Carousel, The Sound of Music, Bill Kenwright’s “Prince of Sherwood”, Dick Whittington, Cinderella, Jack and the Beanstalk, Peter Pan and My Fair Lady and even ‘The Royal Variety Performance’ at the Dominion Theatre in London.

A rugby tackle brought a sudden end to Roy Bolton’s army career, but his four kids think it should not stop him having a new career as a singer. Roy, 50, from Rookery Close, Kelsall, near Chester, said; “The kids thought it would be a good idea if I competed! I’m always singing in the car. I do stuff from musical theatre and today I did a Michael Ball number. I got an audition for the X Factor but I didn’t get through. It was very intimidating, very high tech and in your face and you have to wait around a long time. This was much nicer. I like to do songs that evoke some kind of memory so for my second number today (Sun) I’m going to do Yesterday by the Beatles.” Roy served with the Cheshire Regiment but was invalided out after an accident during a rugby game which smashed his leg in several places and left him needing the aid of a walking stick. “I was in a wheelchair for four years the leg was smashed so bad, basically I went one way and the leg went the other! It was an inter-regiment rivalry match, I didn’t even have the ball at the time I was tackled and got injured!” he said. 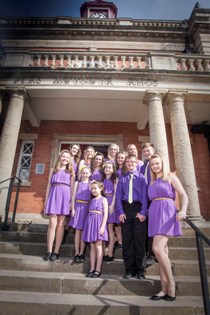 Among the other contestants was Kayleigh Melluish  who set up her performing arts group, The Gleeks  to help her brothers. The 24-year-old, from Heol-y-Wern, Gwernymynydd, near Mold, explained: “I set it up to help my brother Justin, who is 22 and has Down’s Syndrome and Dominic, who is 15. “We really just wanted to have some fun. Dominic was just at that age where he was not a child and not an adult and was not getting any shows to perform in and he was scared that is he stopped he would not get back into performing, dancing and singing. We set it up to have some fun and then invited a few friends to join and today we are auditioning as a group of 13. We competed last year in the Wrex Factor talent show and got through to the finals. Justin goes to Northop College at the moment. We have fought all his life to keep him in mainstream education. Lee has taken him under his wing and now Justin has an agent! He just loves dancing. I directed the village panto and he had a role as Chuckles and probably had the second most lines in the show, how he remembered all the lines I don’t know, but he did. He’s a great comedic performer.” Dominic has also taken part in a panto produced by Lee.

Kayleigh, an ex-Mold Alun High and Yale College student has studied musical theatre in university and has a BA Hons. She is also the youngest person in the country to run a Stagecoach performing arts school part-time at Colwyn Bay. 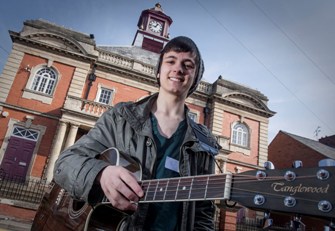 Singer song writer Thomas Hadaway has ambitions to get into the music industry. The 17-year-old from Tan-y-Bryn, Rhosllanerchrugog, has just started a music technology course at Yale College in Wrexham. “I was recently in a band, playing rhythm and doing vocals, which we started at Grango school, called Emphasis. We did a gig at the Johnstown Legion which raised about £500 for charity but we’ve broken up now. I’ve got some songs out on You Tube. After Yale I would like to go to university and hopefully be able to make a living in the music industry,” he said. “I started playing when I was about 14. My dad had a guitar which he didn’t use and so I taught myself to play. I write my own songs and I’ve written about 10 so far,” said Tom, who describes his music as Mod, Indie and Brit pop mix.

THE bright lights of the West End are firmly in the sights of 16-year-old singer Morgan Price Evans. Morgan heard about The Only Way is Wrexham, through the Daily Post, and turned up for auditions yesterday (Sun) to perform ‘On My Own’ from the musical Les Miserables. “I’ve been singing since I was very young,” said Morgan, of Capel Curig, Conwy, “I attended The Academy run by Craig Ryder at Llanrwst every Saturday morning and that brought me out and gave me confidence.” She has had recent success in a Conwy arts festival drama competition, but the Ysgol Dyffryn Conwy student’s ambition is to perform in the West End. “I’ve been to the West End to see Wicked three times, the music is just amazing and I’ve been to see Billy Elliott twice. I just hope I can get to the finals of the competition,” she said.

Stiwt manager, Rebecca Griffiths, who will help select the finalists said: “We’re really excited that people have come from far and wide to take part and it’s fantastic to think we have so much talent in the region, across such a wide age group. The Stiwt is a great venue for performers and the finals should be truly amazing.”

For more information about the next round of auditions contact The Stiwt on 01978 841300 or keeping checking the website: www.stiwt.co.uk