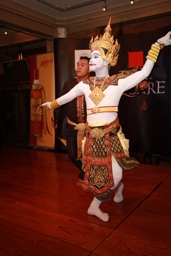 I must say that when the invite came in, it didn’t fill me with a great deal of enthusiasm. Indoor traditional Thai puppet theatre, on one of the hottest nights of the year, isn’t something that you normally cross town for, but sometimes you must suffer for your art.  Besides, there was also the promise of outstanding Thai food. 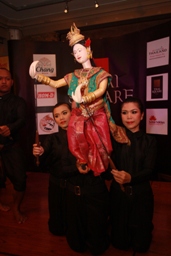 There are seventeen Thai Square restaurants located in London and the South-East and, between them, they serve over a million customers a year. I arrived at the city Minories branch and immediately started tucking into delicious starters, washed down with a few glasses of wine.  I was bracing myself for the ‘Hun Lakorn Lek’  and when the call came to sit down, I didn’t quite know what to expect.

Apparently this form of puppetry reached its peak during World War II and then began to disappear. Sakorn Yangkhiawsod, otherwise known as Joe Louis, decided to revive and recreate it in 1985 with the support of the Tourism Authority of Thailand.  The Joe Louis Theatre is now the last of the Thai traditional puppet troupes and arrives here with garlands from the World Festival of Puppet Art. 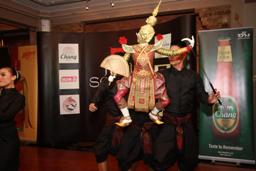 For somebody who grew up with Sooty and Sweep, the Thai version is a revelation. What’s extraordinary is that the performance combines Thai drama and dance with almost life-sized puppets. It takes three people to manipulate each of these creatures which gradually take on lives of their own. When they come down into the audience and start touching people you begin to feel you’re in touch with the stars.  The finale breaks from tradition and has Michael Jackson dancing to Billie Jean.

If you want to see for yourself there’s still time to take in Thai traditional performance at the restaurant locations below: (Show times 19.00 & 21.00). Oh, and the food is great as well.