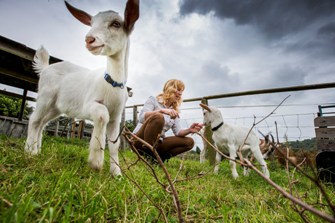 Turning to goat’s milk for medical reasons has proved a business winner for Carol Allen. With her goats producing far too much milk for her family to eat and drink, Carol set up Llanvalley Natural Products and started making pure hand-made soaps, boasting only natural ingredients from Wales, selling on-line and at farmers markets.

Now she will be the first soap maker at Hamper Llangollen 2012 that’s being held on Saturday and Sunday, October 20 and 21. She’s been accepted to attend the food festival because she is a “primary producer”, using her milk for another product. “I’ve visited the Llangollen Food Festival before but I’m really looking forward to going along as an exhibitor. We don’t have our own shop so Hamper 2012 is a brilliant opportunity to meet our customers face to face and for them to try our products before buying. The festival is a high profile event and it will provide the perfect showcase for Llanvalley.”

Carol is a former design and technology teacher at St Richard Gwyn High, in Flint, She and Airbus worker husband Jim and their four sons, lived in Holywell, but six years ago moved to five acres at Dolydd, Cefn Mawr, with wonderful views of the Dee Valley and neighbouring Pontcysyllte aqueduct, mainly to be closer to her parents. Carol wanted to keep goats because one son had an intolerance for cow’s milk and eczema. Five years ago she bought British Saanan goats Lily, Millie and Billy from neighbours Godfrey and Pat Williams.

“My father was a farmer and I knew how to look after livestock,” said Carol. “At first we were just drinking the milk and I was making cheese and yogurt and we needed a lot of scrub clearing so the goats were useful for that. The goats were producing about two litres of milk a day, twice a day. Now I have a system so that one is in kid and the other in milk and we alternate them. I only need a litre of milk a day to produce a batch of 60-80 bars of soap. My youngest son could not use conventional soap because his skin was very sensitive so I started to make my own soap,” said Carol who also taught food technology at Bryn Alyn High in Gwersyllt.

The soap proved very beneficial for her son’s skin and Carol began selling it and went self-employed in July last year. The goats have increased in numbers – Dilys arrived last year and two kids born about five weeks ago, Billy Boy and Philys, are still being bottle fed. “The soap I made from a friend’s recipe and experimentation and research..” 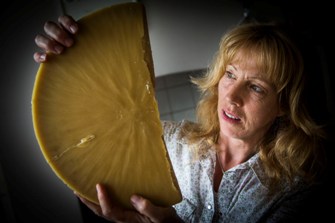 My soap is hand cut and has very little fragrance. I don’t use any artificial ingredients or preservatives. I use pure essential oils which I know will be of benefit and if they have a fragrance that’s a bonus. “I don’t know many soap makers who keep their own goats, milk them and make everything from scratch. I milk the goats and do all the packaging,” said Carol who also has four horses, hens and ducks.

Carol personalises her soap packaging so that outlets and B&B’s can have their own names on the soap – she provides a local outlet, Jones the Boats, with ‘Aqueduct Soap’. About six months ago Carol also started making balms. After meeting Steve Rose from Clwyd Bee Keepers Association at Celyn Farmers Market in Mold. “Steve wins awards for his top quality beeswax so I know that the balms are really pure in quality.”

Carol, a member of the Gwynedd and Clwyd Craft Workers Association and Wales Craft Council, would like to explore the idea of her soap making becoming a tourist attraction but would need help to improve the narrow lane access to their smallholding. “I know tourism organisations would like to keep visitors to the aqueduct in the area longer and developing attractions like this, along with craft workshops, would be one way, rather like they have done at Loggerheads and Afonwen,” said Carol.

Also starring at Hamper Llangollen 2012 will be a trio of Wales’s top chefs. Graham Tinsley, the star of ITV’s Taste the Nation and a former captain of the Welsh Culinary Team, will be joined in the show kitchen by S4C favourite Dudley Newberry. Completing the hat-trick will be the ever popular Dai Chef, who is returning to the event after an absence of several years.

Robert Price added: “Thanks to a whole host of indigenous companies, North East Wales is rapidly establishing a reputation as a centre of excellence for high quality cuisine. The food festival is a perfect shop window for the companies who form the backbone of our rural economy. The location of the Pavilion is absolutely  spectacular – I can’t imagine that any other food festival in the UK has a more beautiful setting.”