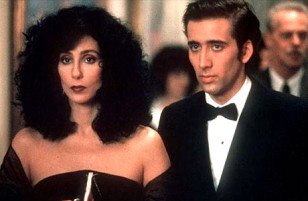 She’s a soaring talent – with a big heart. Valentine’s Day lovers will be left Moonstruck at a special charity event where the award-winning mezzo soprano Sioned Terry will be performing. Sioned will be adding her own special blend of amore at Denbigh’s Theatr Twm o’r Nant at 7.30pm on Tuesday, February 14. The evening will include a special screening of the romantic Hollywood blockbuster Moonstruck starring Nicholas Cage and Cher.

The event to raise money for St Kentigern’s Hospice is being organised by the Pendine Park care organisation and Denbigh Chocolate Shop in association with Denbigh Film Club. The audience will be treated to champagne and chocolates while canapes will be provided by the Com Amici Italian Bar and Kitchen when the doors open at 6.45pm. Whatever is raised on the night will be matched by Barclays Bank and all the proceeds will go to support the work of the hospice in St Asaph which provides end of life care to adult patients across North Wales, taking in East Conwy, Denbighshire and Flintshire.

Sioned said: “I am really, really excited as it will be a really special night. And the evening is in support of such a worthy cause which makes it even more special.” Born in Caernarfon, Sioned attended Bangor University where she studied to become a Bachelor of Music as well as completing a diploma in Music Technology and Performing. She is now settled in Towyn, where she lives with Paul, her police officer husband and their five-year-old daughter, Nel. Sioned said: “Having graduated from Bangor I went into teaching and performed as and when I could. However, I left my post at Denbigh’s Howells Preparatory School before Christmas so I could concentrate solely on my music and move up to the next level.” 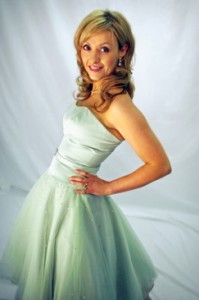 Not that Sioned hasn’t already performed at the highest level as she already has several national and international Eisteddfod successes to her name. She has appeared as the guest soloist alongside the renowned South Wales Male Voice Choir in concert at Saint David’s Cathedral, Pembrokeshire. And she was invited to perform with the choir again the following year at Cheltenham Town Hall where she also premiered music for voice and harp, by Hollywood composer Michael Lewis, working alongside top harpist, Catrin Finch. Sioned has sung for royalty too having performed in front of Prince Charles when he visited Bangor University. More recently Sioned was guest soloist at the North Wales Choral Festival concert, held at Venue Cymru, and she was also a guest of the Trelawnyd Male Voice Choir for their annual concert at St. Asaph Cathedral.

But her biggest thrill of the last 12 months came when she was asked to sing the Welsh National Anthem at the start of the Commonwealth Ultra Long Distance Running event at Conwy last September. She said: “It was such a massive thrill and I have to admit I had a real lump in my throat afterwards. That has been a real highlight of my career in music so far. “And I met so many wonderful people from around the Commonwealth, people I am still in touch with today via e-mail. It really was a wonderful experience. Then again I just love singing and performing so much. “That’s why I really want to step up to the next level and why I decided to come out of teaching so I could concentrate on performing. I am determined to be a real success and want to perform at the highest level possible.”

Sioned doesn’t underestimate the role classically trained singers like Katherine Jenkins has had on the general public’s perception of classical music. She said: “Katherine has without doubt made classical music more acceptable to the untrained ear. It wasn’t that long ago that classical music was only popular with a small proportion of the population. It had an almost snobbish aura about it. However, that has changed over the last few years and now more and more people are enjoying listening to popular mainstream songs performed by classically trained singers. “It’s artistes such as Katherine Jenkins that gave me the confidence to give up teaching and to aim for the next level as a professional singer.”

Not that juggling her professional singing career with her role of being a police officer’s wife and a full-time mum is ever easy. Sioned said: “It can be hectic but believe me I am used to chaos. Christmas Eve was a prime example as I was performing at Conwy’s annual outdoor concert. What should have been a brilliant night was a little spoiled by the atrocious weather. It was blowing a gale and the rain was torrential. It was hard work trying to stand up let alone sing! But it was still a fun and enjoyable night for all that to be honest.” 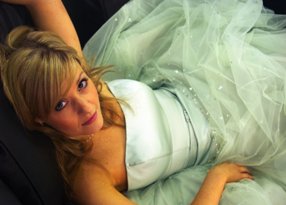 And before she wows the audience with her captivating voice at the Valentine’s Evening of Entertainment event at Denbigh’s Theatr Twm o’r Nant, Sioned is to perform at a memorial concert for North Wales politician and farmer Brynle Williams on January 28. Then, on February 18 she will join the Rhos Orpheus Male Voice Choir in a concert in support of the British Heart Foundation at St Thomas’s Church, in Rhyl. Sioned is really looking forward to singing some really popular love songs on Valentine’s Night. She said: “I am putting together a programme packed full of love songs and hits from the musicals such as Les Miserables and Phantom of the Opera. It promises to be a special intimate night of romance and I’d love to see you there!”

Pendine Park proprietor Mario Kreft MBE, who lives in Denbigh, is delighted Sioned has agreed to perform at the Moonstruck in New York event. He said: “St Kentigern’s Hospice deserves all our backing and I hope we can raise as much cash in support of the brilliant work hospice staff do. It promises to be a very, very special night.”

Mark Young, who runs Denbigh Chocolate Shop, said: “The hospice deserves our love and affection and we are extremely grateful to Denbigh Film Club for hosting our romantic evening. Sioned is a fabulous performer with a truly wonderful voice and I would encourage romantic couples who want to try something different this year to buy a ticket and come and enjoy the event.”