What’s this me hearties, pirates in St Asaph Cathedral? For two days the adventures of Captain Exmark and dog Spot and nephew Luke Ovarthar and puppy Patch will be played out at the Cathedral. They will feature in a colourful premiere of a specially commissioned musical work for North Wales International Music Festival that’s being held between September 24 and October 1. 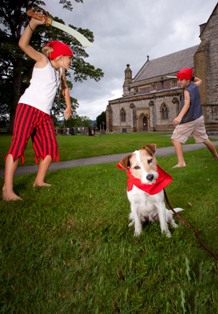 Welsh composer Gareth Wood has created a 25 minute score to accompany a story written by children’s poet and writer Francesca Kay, from Hay on Wye. The cathedral setting in St. Asaph is much more appropriate than people might think – thanks to a couple of real-life 18th century pirates. New research claims that Long John Silver was based on a Welsh adventurer who came from Denbighshire. Following a nine-year investigation, author John Amrhein is adamant that Robert Louis Stevenson modelled his classic novel Treasure Island on the lives of Owen and John Lloyd, brothers born in nearby Rhuddlan.

Owen is believed to have sailed to the West Indies and went on to bury 52 chests of Spanish silver pieces of eight on the deserted Norman Island, part of the British Virgin Islands. And John had a wooden leg – just like the book’s famous character. Tŷ Cerdd Music Centre Wales based at Cardiff has commissioned the new work inspired by the Welsh pirates. It will be performed by the Cardiff County and Vale of Glamorgan Youth Symphony Brass Ensemble.

Gareth, who has worked with the world’s greatest conductors and was a member of the Royal Philharmonic for 33 years, said his commission was one of the “most enjoyable” of his career. “Sea Dogs – A Pirate’s Tail (corr)” is part of Ty Cerdd and the Festival’s drive to encourage musical appreciation, story-telling and composition in the community, involving dozens of primary schools in Denbighshire and Flintshire.

The project is part of the North Wales International Music Festival’s education programme, working in conjunction with the festival’s resident ensemble, Ensemble Cymru. This project has been supported by the rural development agency Cadwyn Clwyd and funded through the Rural Development Plan for Wales 2007-2013 which is funded by the Welsh Government and the European Union.

Artistic Director Ann Atkinson said: “This is a really exciting and colourful new work which is going to be huge amount of fun for the children involved and the audience. When we embarked on this project, we weren’t aware of the area’s connections with the world of piracy and the literary classic it is said to have inspired. I’m sure it will fire up the imagination of the audience and bring the whole experience to life.”

The Owen brothers aren’t Wales’s only claim to fame in relation to piracy. Black Bart who gets a mention in the St Asaph premiere was born John Roberts in Carmarthenshire and regarded as one of the most successful pirates in the Golden Age of Piracy having captured over 470 ships.

Welsh pirate Robert Edwards was given 77 acres of unsettled land – on which Manhattan was built – by a grateful crown for interrupting Spanish trade. His ancestors have tried ever since to get their share of an inheritance valued at $650 billion. Tŷ Cerdd Director Keith Griffin said: “The project includes step-by-step lesson plans and resources with support from the Ty Cerdd education staff. This includes lesson plans for classroom composition and learning sea shanties; workshops on graphic scores and elements of music; live concert performances and a children’s short biography of Gareth Wood. During the project, pupils study the story of ‘Sea Dogs – A Pirate Tail’, exploring how basic compositional techniques can be used to portray emotion, action and description, and how this relates to, and enhances, the content of a story. They then retell the story in their own words and compose their own version of the soundtrack. Based on the works of a living Welsh composer and a Welsh author, this project is strongly rooted in the Curriculum Cymreig, and will help to deliver the three areas of study for National Curriculum Music. In terms of Curriculum 2008, it has strong links with literacy, art, dance, drama and the completed composition can be performed in a school assembly, for other classes in the school and at school concerts.”

Francesca will narrate the story, which includes a ghostly cameo from legendary Welsh pirate Black Bart – Barti Ddu, at the Cathedral on September 27 and 28 – dressed as Captain Exmark’s grandmother. “A couple of years ago we came up with First Dragon for the festival and it was hugely successful. Ty Cerdd wanted another fun piece for the St Asaph festival. I thought kids love dinosaurs and pirates and Ty Cerdd said let’s go with pirates. So I’ve included a foolish adult with a sensible child, Luke, who saves the day. I’m very pleased with the results, it’s full of puns and jokes,” said Francesca who runs writing workshops. I’m delighted to be part of the festival, it’s a fantastic event,” she said. Gareth Wood, 61, who lives and works in London but still visits family living near his home village of Cilfynydd, is planning to visit the festival for the performance on September 27.

The former Pontypridd grammar school boy, who graduated from the Royal Academy of Music and became a member of the Royal Philharmonic, has had a stellar musical career. “This is a jolly piece and I hope funny, it is quite tricky just working with brass, I had to be particularly inventive. I thoroughly enjoyed working on it, it was quite exciting and one of the most enjoyable experiences,” he said

And if you need to get into the mood for pirate stories, remember that September 19 is Talk Like a Pirate Day! Other highlights at the festival include the world premiere of a new work by the royal composer, Paul Mealor, who shot to global fame thanks to the sensational Royal wedding anthem he wrote for Prince William and Kate Middleton, and a concert by piano virtuoso Llyr Williams. The festival’s Artistic Director, Ann Atkinson, is a talented mezzo soprano in her own right and will again be among the singing stars this year. In addition, Mid Wales Opera are going to be performing the Puccini favourite, Madam Butterfly.