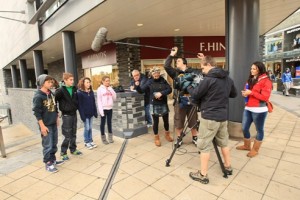 A shopping centre in Wrexham was chosen for a starring role for a TV show presented by four youngsters who all live in the town. Tag, a new children’s S4C magazine show, will begin transmission in early November and gives young people the opportunity to highlight what’s good about their home towns and villages. Four pupils of Ysgol Morgan Llwyd, Callum Cross, Huw Jones, Moli Williams and Cara Jones, all 12, were chosen to present a series of items in the show about  Wrexham which will be shown on S4C on Friday, November 18.

Producer  Catrin Evans was with the film crew and the show’s four star performers filming the item about Eagles Meadow. The Welsh language programme was, she said, a real opportunity for youngsters to show off what’s good about the area in which they live. She added: “They are given a pretty free rein to come up with their own ideas. Callum, Huw, Moli and Cara wanted to show off Eagles Meadow as it’s a place they come to a lot at weekends whether to socialise, shop or go to the cinema, bowling or one of the restaurants. We’ve had great fun filming in Eagles Meadow and the shoppers have been absolutely brilliant. The show is a magazine programme aimed at youngsters but I would encourage everyone from the Wrexham area to tune in, especially on November 18 when the town will be featured.” 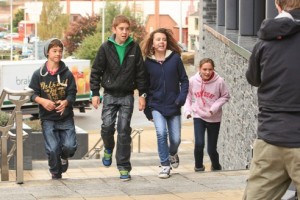 The foursome were “absolutely made up” when they heard they’d landed their dream presenting jobs. Huw said: “It’s amazing, we all had to audition at school. It was about being chatty I suppose and confident. They wanted to hear about stuff like our hobbies and what we like doing at home. It’s actually my second time on TV as I was once on Lazy Town on Cbeebies, but it wasn’t exactly a starring role although you could see me in the background!”

Moli added: “It is a bit nerve-wracking because you have to get everything right. It’s quite funny having to do things two or three times but the camera and sound people and Catrin and the researcher have been amazing. I’d like to get a job on TV in the future and perhaps be famous. However, both Cara and I have been on S4C before when we were performing at the Eisteddfod, but we didn’t have a speaking part.”

According to Cara, she was really excited after finding out her audition had been successful and she had landed one of the four roles. She said: “It’s brilliant and a really good experience. We wanted to show Eagles Meadow as we come here a lot shopping and at weekends. It’s one of our favourite meeting places and all the shops are brilliant. We have also been to Wrexham Football Club. We were filmed having a kick-about on the pitch, which I think the boys liked a bit better than Moli and me!” 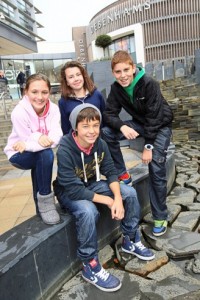 Callum added: “It’s been quite hard work but loads of fun. Getting to go on the pitch at the Racecourse ground and have a kick-about was brilliant. We also filmed at my home later. Huw, Moli, Cara and me are testing out a new Wee game and giving our verdict on whether it’s good or not. That will also be good fun. We have all really enjoyed it and I’d love to do something in television when I am older.”

Huw added: “I’d like to be a presenter too or a comedian! But I bet it’s quite hard to get into. I know all our parents were really pleased we landed the presenting job on Tag and I bet all our families will be gathered around the TV on the evening it’s screened.”

Kevin Critchley, the manager of Eagles Meadow, was pleased to be able to welcome the Tag team to the shopping centre. He said: “We were delighted to hear that Callum, Huw, Moli and Cara love coming here so much and we’re very much looking forward to seeing the programme when it’s shown. We’re very lucky to live in such a fantastic town and it’s wonderful that the programme will be showcasing what we have to offer.”

Sian Eirian, S4C Head of Children’s Services, said: “Tag is a new magazine series and one of the strands is a ‘love where you live’ feature. Tag will give young people in different parts of Wales the opportunity to say why they love living where they live. It’ll be a positive uplifting feature which should appeal to everyone living in areas like Wrexham, not only the young people.”