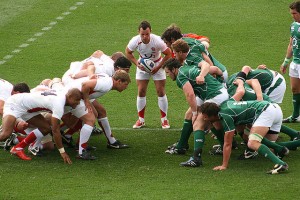 The Rugby World Cup may be well under way, but due to the time difference between New Zealand and the UK and Ireland, this year’s tournament more or less impossible to follow. Yes England, Ireland and Scotland may have got out of the blocks with wins, but they were rather unconvincing, and with Wales succumbing to the strength of the world number 3 country; South Africa, the tournament has got off with more of a whimper than the bang that was expected.

Though there are many people who made it out to New Zealand to support their country, there is easily 10 times that amount left at home, simply unable to afford both the inflated price of flights tickets and accommodation, and of course the subsequent time required off work. So for those who are left at home, they face ridiculously early rises to watch their country, and due to the unsocial times of these games, it is impossible to even watch a game in pub and enjoy the world cup atmosphere as all viewing is seemingly restricted to people watching it in their own homes.

When all these factors are added up, it is obvious why people are not as interested in this tournament compared to previous world cups. When you look at some of the packages available on the market for the Six Nations tournament in 2012 then it is easy to see why more people are holding off on heading to New Zealand, and instead intend to make it to the away games in this tournament.

Several travel companies, such as Activity Breaks, offer Six Nations ticket packages for the home nations’ away games such as Italy v England in Rome for £113 where you get a 2 night hotel stay with tickets. With a cheap flight added on, you can realistically get away on a Six Nations weekend for well under £200 and take in some of the sights of Rome too, all for less than the tax for a flight to New Zealand.

So don’t worry if you are missing the matches in the Rugby World Cup, the Six Nations is only around the corner, and even if you can’t make it to an away game, at least you can watch it in the pub at a civilised hour.