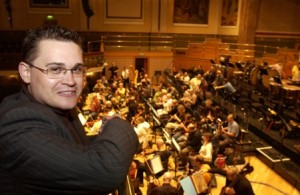 North Wales provides not just gold for royal weddings but musical gems. Anglesey composer Paul Mealor’s sensational success with his composition for the Royal Wedding has catapulted him to international stardom. But the St Asaph-born musician returns to his roots this Autumn when he appears as one of the star attractions at the North Wales International Music Festival between September 24 and October 1.

Described by the New York Times as “one of the most important composers to have emerged in Welsh choral music since William Mathias”, the similarities between the two ‘Royal’ composers are startling. Professor William Mathias started the NWIMF at St Asaph Cathedral in 1972. He taught for a short while in a Scottish university, Edinburgh, and was commissioned to write the anthem for the wedding of Charles and Diana in July 1981. He also was a frequent visitor to the United States and was awarded an honorary doctorate by the Westminster College Choir of Princeton in 1988.

Dr Mealor, who grew up in Connah’s Quay and on Anglesey, is currently reader in composition at a Scottish university, Aberdeen, is due to take up a residency in Princeton University, and his composition of Ubi Caritas for Prince William and Catherine Middleton’s wedding, has put him in the classical music charts. He also launched a music festival – Northop – about 11 years ago.

“My first experience of the North Wales International Music Festival was turning pages for Williams Mathias when I was 10 years old – and I got it wrong!” admits Paul. His retired parents, Alfred and Patricia still live on Anglesey and Paul makes the seven hour drive home as often as he can and has a composing studio at Pentraeth. Paul studied composition privately from an early age with John Pickard, and attended the University of York where he studied with Nicola LeFanu. “I then went to the Royal Danish Academy in Copenhagen and studied with the distinguished composer, Hans Abrahamsen (1998-99),” he said.

After gaining his doctorate from York he moved to Scotland to teach at the University of Aberdeen, where he is currently Reader in Composition, and has held visiting professorships in composition at institutions in Scandinavia and the United States. He is a Fellow of the Royal Society of Arts. According to Ann Atkinson, the Festival’s Artistic Director, the coincidences involving the two royal composers were uncanny. She said: “The parallels between the careers of Paul Mealor and William Mathias are absolutely amazing. It just serves to underline the fact that Wales is blessed with fantastic musical talent and we are thrilled that will be providing a showcase for Paul Mealor’s brilliant compositions.”

Paul Mealor’s links with Wales are very strong, his great uncle George Williams was Mayor of St Asaph and he also has family in Cardiff and Barry. From his time in Connah’s Quay he developed strong ties with the Northop Silver Band, in which he played euphonium and trombone and conducted the youth band. “I’ve been back many times to the St Asaph festival. It’s fantastic that North Wales has all these great musical experiences on its doorstep, it’s just brilliant, some of the best choirs and orchestras so near.” Next year he has plans to visit America where he will be working with choirs during his residency at Princeton and he is also trying to complete a CD for Decca for this October.

At the NWIMF in St Asaph he will be involved with talks, concerts and performances, and festival musical director Ann Atkinson and the festival’s resident ensemble, Ensemble Cymru, will be performing his works and works that inspired and influenced him including the superb ‘Lark Ascending’ by Vaughan Williams. Of course, visitors can also hear THAT work – Ubi Caritas – the Royal Wedding music sensation, which will be performed by the 25 members of the Aberdeen University Chamber Choir inside one of the best acoustic chambers in North Wales, St Asaph Cathedral.

That work, which has sold thousands of copies in the two weeks after the wedding, has already catapulted Paul to fame. “I was at the Classical Brits Awards the other evening and met Shirley Bassey and Katherine Jenkins, which was wonderful. “The trip to Princeton (where he will work with the Westminster Choir)was already planned but since the wedding it has now been extended to include New York,” said Paul. There he will he will work with the Antioch Chamber Ensemble, widely regarded as the finest professional choral music ensembles in America.

But how did he come to compose the Royal Wedding “hit” because contrary to popular belief it was not commissioned. “I think Prince William and Catherine heard a piece of mine called Now Sleeps The Crimson Petal (which will be performed at St Asaph). Catherine in particular loved the piece and wanted it for the wedding. But in conversation with people at the Abbey I said I felt the words were not right for a wedding and I decided to re-set it. I took Ubi Caritas and a re-worked it, re-set the structure and changed the key. “I previewed it last October in St Andrew where it was performed by three university choirs and I don’t know whether they heard it or whether their friends heard it.”

Is he afraid he will be remembered for just the once piece of music – despite the fact he already has a formidable body of work to his name? “William Walton was asked if he thought he would be remembered for his most famous work Façade and he said something like: ‘If I am remembered for anything I will be pleased.’ “I’m very grateful for the exposure it has given me and hopefully people will be encouraged to look at the other work. I don’t know whether I’m going to be remembered, you can’t worry about history.”

Ann Atkinson added: “Apart from Paul Mealor, we have a superb line-up this year and more details will be released about the other artistes in the coming weeks.”

For more information about this year’s event which is being held between September 24 and October 1.and how to book tickets go to http://www.northwalesmusicfestival.co.uk/