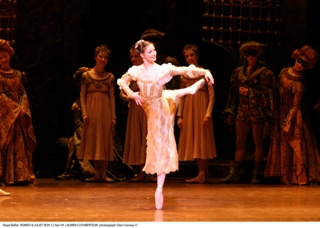 The greatest love story ever told is coming to Wrexham thanks to a global collaboration with the Royal Ballet. Their stunning production of Romeo and Juliet will be beamed live to the Odeon Cinema at the Eagles Meadow shopping centre on Thursday, March 22. The cinema is one of 600 venues worldwide that will be screening Shakespeare’s tale of tragic, star-crossed love at the Royal Opera House in London’s Covent Garden.

Odeon manager  Andy Elvis, says the performance by the world famous ballet will be a first for Wrexham thanks to the installation of high-tech satellite equipment. He said: “This really is massive for Wrexham and a huge opportunity for us. The screening of live events in cinemas is definitely something I am sure will grow. There is huge potential whether it’s live sport events such as F1 perhaps or rock concerts. The opportunities are endless. The equipment has all been installed and tested and I have to say the sound and picture quality is absolutely remarkable. It really is as if you are actually there. This is the opportunity to watch performances such as Romeo and Juliet direct from the Royal Opera House without the high cost of travelling to London and paying high ticket prices.”

The March 22 performance stars Lauren Cuthbertson as Juliet while Principal performer Federico Bonelli will play Romeo. Devon-born Principal Cutherbertson began dancing with the Royal ballet School in 1995 and gained second place in the Young British Dancer of the Year in 2000. In 2001 she was silver medallist at the Adeline Genée Award before joining the Royal ballet as a performer in 2002 and was promoted to soloist in 2003 and Principal in 2008.

Italian Federico Bonelli has been a principal of the Royal Ballet since 2003 and dances lead roles in a number of ballets including Swan lake, The Sleeping Beauty and is also dancing with Lauren Cuthbertson as the Knave of Hearts in Alice’s Adventures in Wonderland.

Andy Elvis added: “It promises to be a stunning evening of entertainment and something new for North Wales and Wrexham in particular. The curtain goes up at 7.15pm prompt. The ballet will then be performed in three acts. The first lasts one hour before a 20 minute interval. Act two is shorter at 33 minutes followed by a 20 minute interval before the final act of 39 minutes gets under-way. There will be exclusive interviews screened before the performance and during the intervals as well as backstage footage to give a real insight into the staging of one of the world’s most popular ballets.” 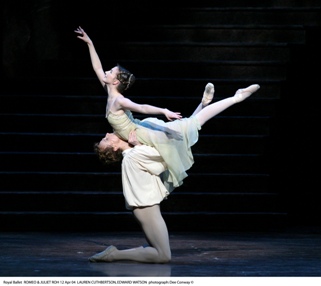 Royal Ballet spokeswoman Sophie Lawrenson says the March 22 performance will be beamed live to more than 600 cinemas across 25 countries, including Argentina, Australia and America helping the Company to bring ballet to a far wider audience. She said: “Featuring two of the Company’s most established dancers in Lauren Cuthbertson and Federico Bonelli, Kenneth MacMillan’s heart-breaking production has wowed audiences for more than 40 years. Powerfully moving, it brings the full force of the classic love-story to life leaving the star crossed lovers as the fatal victims in its wake. Based on Shakespeare’s famous play, it features the full Company of the Royal Ballet who fill the stage with colour and energy. The haunting Prokofiev score creates an atmosphere of drama and tragedy as the pair of lovers embark on an emotional journey from the hopeful innocence of youth to the realization that only death can unite them.”

Romeo and Juliet is the second of an initial four performance series of classic ballet and theatre productions to be beamed onto the screen of the Eagles Meadow venue. According to Andy Elvis: “We started with a National Theatre production of Shakespeare’s The Comedy of Errors on Thursday, March 1. Following Romeo and Juliet we have Oliver Goldsmith’s She Stoops to Conquer live from the National Theatre, London on Thursday, March 29 and Verdi’s Rigoletto live from the Royal Opera House, Covent Garden on Tuesday, April 17. Tickets for Romeo and Juliet and Rigoletto are £15 each while She Stoops to Conquer are £12.50p. Those attending the performance of Rigoletto should be aware the act opera does contain scenes of a sexual nature and some nudity, particularly in Act One. However, we know Romeo and Juliet is going to be particularly popular and I would encourage anyone planning to purchase tickets to do so early to avoid disappointment.”