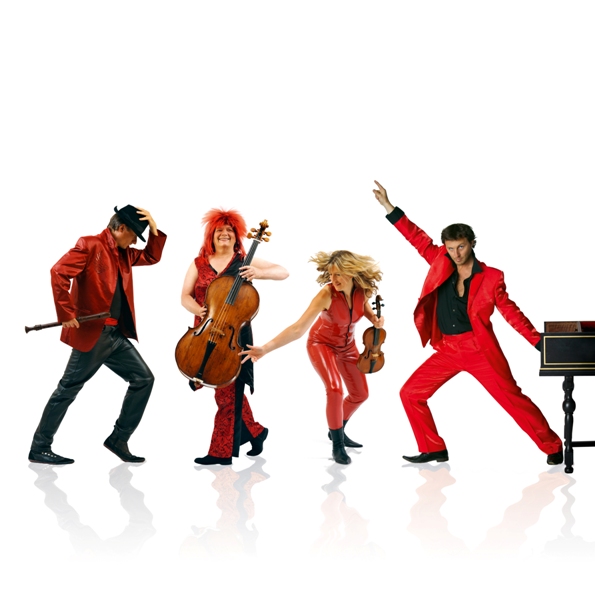 Classical music is not meant to be about flamboyance and theatre nor is it usually visually exciting – but don’t tell that to Red Priest. Expect the unexpected from the Baroque quartet when the four irreverent but talented musicians perform at the North Wales International Music Festival, at St Asaph Cathedral, from September 22 to September 29.

Comprising recorder player Piers Adams, his wife, baroque violin specialist, Julia Bishop, cellist Angela East and harpsichordist David Wright, Red Priest pack their performances with energy, theatre and visually stunning effects. According to Piers Adams, the fact their high-energy theatrical style is contrary to everything classical purists believe in is something really worth celebrating. He said: “Musically we are four misfits to be quite frank. But what we try and do is inject a whole lot of fun into our performances and make them exciting. After all Baroque music started out in around 1600 and went on until 1750 or so. It was new, exciting and would have been performed flamboyantly. We try and reflect that while others may try and be academically accurate in how they perform, we play from memory and don’t use sheet music. For us it’s more about energy and taking the music to a whole new level.”

Red Priest, named after red-haired Italian priest and composer Antonio Vivaldi, have built up a large world-wide fan-base since forming in 1997. Piers said: “We are kept pretty busy to be honest and before the North Wales International Music Festival we are across in the United States, this time in and around Boston, Massachusetts. Then it’s back to the UK for a couple of festivals and then off to Germany, Austria, Croatia and the Czech Republic. We do have a really good following and tour the US a great deal as well as the Far East, Europe and Australia. It’s amazing really, places like Germany, where you’d think they would be very stiff and traditional, seem to love the freedom we bring to baroque music and performances.” 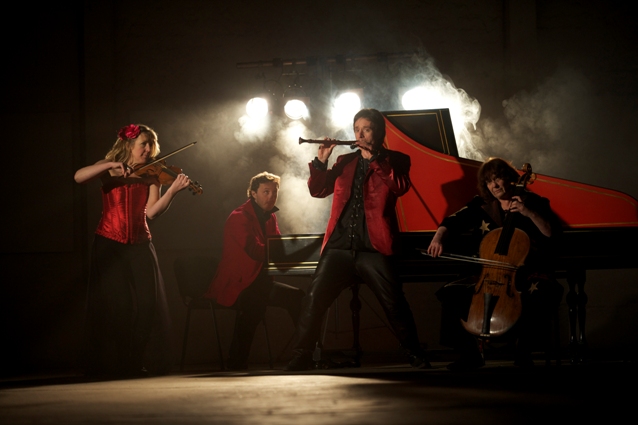 Piers believes the mix of instruments they use in their music makes for a perfect sound. He added: “There were certainly pieces written for just the instruments we play. Actually it’s not too dissimilar to a rock band. The recorder is like the lead singer, the violin like the lead or rhythm guitar, the cellist is the bass guitar player and the harpsichord provides the percussion. As a line up we really work well together and get along brilliantly, although you wouldn’t think so in rehearsals, which can get a bit heated and fraught to say the least! I think a lot of the purists thought we’d be a flash in the pan and would quickly, if not quietly, disappear. The fact we are still going strong, in fact becoming increasingly popular, means they have had to change their view. I think we have gained more respect the longer we have gone on. We have always just wanted to present this fantastic music in a way which will appeal to a wide audience, not just early music aficionados. That’s why the image of the group, its marketing and staging are up-to-date and modern – sometimes we almost take a rock-band approach to our presentation, especially in terms of the raw energy we like to put into every performance.”

Piers says the group are really looking forward to their return visit to the North Wales International Music Festival. He said: “It’s great to be invited back, it’s a real honour to be honest. The acoustics are great and we are looking forward to a really good show.  It’s wonderful music and we want to thrill our audience. Can’t wait to see you there!”

As part of the festival, Piers Adams will be staging a Recorder Roadshow and is inviting local schools and musical adults to take part in a workshop. Participants will have the opportunity of performing with Piers at the Aspire and Inspire  Youth Concert in the City, on   Thursday, September 27, at St.Asaph Cathedral  at 7.30pm.   Anybody who’s interested should contact the festival office. This year’s festival will also feature the world premiere of a new work by the internationally acclaimed composer Karl Jenkins. The work was commissioned by the festival to celebrate their 40th anniversary and the granting of city status to St Asaph by the Queen to mark her Diamond Jubilee year. It will be played by royal harpist Hannah Stone.