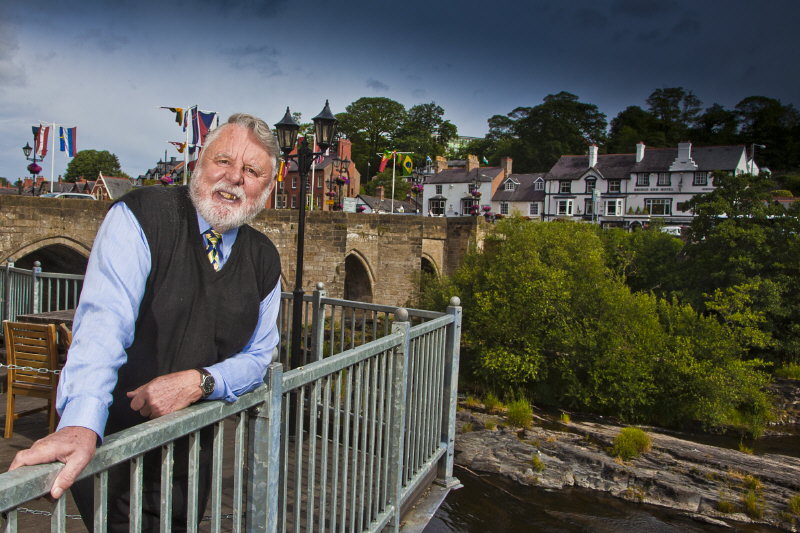 Human rights campaigner Terry Waite has hailed the contribution of the Llangollen International Musical Eisteddfod in helping to give world peace a chance. As he prepares to take his place at the head of the 67th annual festival , Mr Waite has spoken of the crucial role music played in helping him through his dark days of captivity as a hostage in Beirut.

The Eisteddfod President has also described how the festival, which attracts people from across the globe, is a “powerful example” of how ordinary men and women can make a positive difference in a world torn apart by war. Mr Waite, 73, has been awarded the MBE and CBE for his humanitarian work. He was serving as special international peace envoy to the Archbishop of Canterbury when in 1987 he journeyed to Lebanon – then one of the world’s most dangerous place – in a bid to secure the release of four hostages, including the journalist John McCarthy, being held by an Islamic jihad organisation. During the tense negotiations he was himself taken hostage on January 20, which was the start of his journey into the hell of four years of captivity in a Beirut dungeon.

For most of the time Terry was kept in solitary confinement in a room without any natural light, chained to the wall and forced to sleep on the floor. He was  beaten and subjected to mock executions. He recalls of how every day he did his best to hold himself together spiritually, mentally and physically. In the final stage of his captivity, his robust health began to deteriorate when he contracted a severe lung infection. His torment eventually ended in November 1991 after 1,763 days as a hostage.

Mr Waite, who will make his ever-popular appearance as President at this year’s Llangollen Eisteddfod from July 9-14, has now spoken of the important part his lifelong love of music played in helping him endure those harrowing times. He said: “I have always been interested in music since I was a boy and was a member of the local church choir. My grandmother taught the piano and to supplement the family income in the days of the Depression played in the theatre for the silent movies. When I visited her I always requested her to play some of those old tunes for me. Alas, I never had opportunity to learn to play an instrument but my interest in music continued across life. During the days of captivity as a hostage I was kept in strict solitary confinement without access to books or music for many years. During those dark days I recalled music I had listened to and played the melodies in my head in so far as that was possible. Music, like good language, has, I believe, the capacity to breathe harmony into the soul and in those days inner harmony was something I sought and needed. As Gareth Malone has so clearly demonstrated in his television series, music does have the capacity to bring people together who would not be brought together in any other way – which brings me to the Eisteddfod. As President of this great event I have seen across the years people from all across the world come to a small Welsh village bringing with them their musical talent. Participants from groups that back home were fighting each other have forgotten their differences and joined together in music, song and dance. Llangollen is a powerful example of how ordinary men and women – for the Eisteddfod is still organised in the main by volunteers – can make a positive difference in this war-torn world.”

Terry added: “It is a mistake to think that it is only people in high political office who can bring peace. Peace begins in the hearts of ordinary men and women who learn to share and trust. Music is one powerful means to this end. It was an honour for me when Karl Jenkins invited me to contribute words for his recent work, The Peacemakers. I wrote the words for the soprano solo and they sum up the message of the Eisteddfod. I look forward to meeting many old friends there this coming year and of course to making many new ones.”

In the years since his release, Terry has continued his tireless quest for world peace and has become the founder of or associated with a wide range of humanitarian organisations, such as the international development agency Y Care and Hostage UK. On the Llangollen Eisteddfod’s opening day, Tuesday July 9, he will lead the colourful traditional procession through the town to signal six days of world-class competitions and contests.

The fesitival’s Musical Director, Eilir Griffiths, was honoured that a man of such “great humanity and courage” was their Patron. Mr Griffiths said: “Terry Waite is a great man whose passion and dedication to the cause of peace is an inspiration to us all. His personal ethos chimes perfectly with the fundamental purpose of the International Musical Eisteddfod which was founded as a means of promoting global harmony in the aftermath of the Second World War.”

This year’s event is from Tuesday, July 9, to Sunday, July 14. For more information go to the website at  and on Facebook