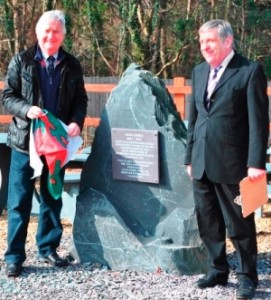 Inigo Jones Slate Works is celebrating its 150th anniversary in 2011 (1861 – 2011) having worked continuously at the Tudor Slate Works at Groeslon site since it was set up in 1861 to produce school writing slates.

The Heritage Minister said “ I’d like to congratulate John Lloyd and his team on reaching this significant milestone.They’ve stayed faithful to the raw material of Welsh slate, the quality of which is second to none but have developed their products to keep up with the needs of the customer.The workshop is also a well known visitor attraction in the area giving an insight to working with slate”

John Lloyd one of the company’s directors said   “ The reason the company has survived for so long is because of the versatility and quality of Welsh slate. A new free exhibition also opening today shows the different products prefabricated from Welsh slate over the last 150 years, which includes writing slates, electrical panels, memorials and honing stones. Today the company produces architectural , memorial, craft, landscape and garden products using the same raw material namely 500 million year old natural Welsh slate ” 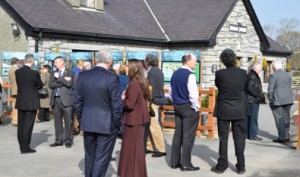 The company is now also a major tourist attraction and the company offers a self guided tour of the works and also has a superb showroom where its slate products can be purchased as well as other Welsh slate craft products.

John Lloyd added “ Tourism is now an essential part of the business and I anticipate it will be even more important in the future, as will web sales that continues to grow year on year , and allows us to supply our products all over the world. We are investing again this year to improve our visitor facilities and upgrading our website”