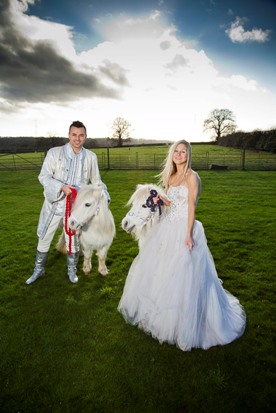 Two Shetland ponies are swapping Buckingham Palace for a theatre in North Wales – oh yes they are! Loveable Cindy and Sherry are appearing in the popular panto, Cinderalla, which starts at the Stiwt Theatre in Rhos on Thursday night (December 15).

They will be starring alongside ex-Big Brother favourite Nikki Grahame who’s playing the Fairy Godmother and pop singer Andy Scott Lee who’ll have female hearts fluttering as he tackles the role of Prince Charming. Fifteen year old Cindy, 15, and Sherry, 17, will pull Cinderalla’s coach on stage so she can attend the ball at Prince Charming’s palace. But the cute Shetlands have real royal connections. They were both guests of the late Queen Mother at Buckingham Palace when the were appearing in panto in London.

Trainer and owner Ian Lucken has been supplying pantomime ponies to theatres for almost 50 years. He said: “Cindy and Sherry spent time as royal guests at Buckingham Palace. It was when the Queen Mother was still alive and they were just two young ponies. They were appearing in a panto at a small theatre near Buckingham Palace and an agreement was reached so they could be stabled there each night. The Queen Mother actually went to see the pantomime, which was of course Cinderella.”

Ian, who lives at his stables in Reading where he has more than 100 Shetland ponies, added: “Cindy and Sherry have worked with a lot of top stars in pantomime such as Bobby Davro. This year we have sent ponies out as far north as Aberdeen and as far south as Torquay. Cindy and Sherry are two of our most experienced performers and work very well together. They are very well trained and thoroughly enjoy their time on stage.”

Cinderella Producer Lee Kelly of LHK Productions is determined to capitalise on the success of last year’s panto by yet again producing Wrexham’s number one show at the Stiwt Theatre. He said: “We have a fantastic cast and we are all very excited to be returning to the Stiwt this year with a great line up and some great surprises. And of course our two Shetland ponies are bound to capture the hearts of everyone who comes to see the show. They don’t want paying in cash for performing but it is costing me a sack full of carrots!” 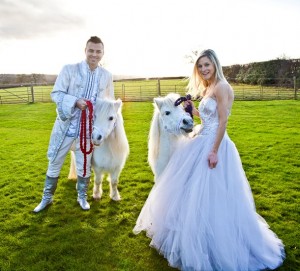 Lee added that the two trained are spending their Christmas holidays on a Wrexham farm where they will be pampered before being transported to and from the Rhos theatre for each performance. He said: “For me you can’t put on a show like Cinderella without having real Shetland ponies to pull the carriage onto the stage. It’s magical and really adds something extra special to the show. We have put together a really great panto with a fantastic cast, fabulous costumes and wonderful music so we want the best and our Shetlands are certainly that. Luckens have been training and hiring out pantomime ponies for more than 50 years and, to their owners, their welfare is paramount. They really are sweet and superbly well trained. And they will add definitely add that real touch of Christmas magic to what is our best panto yet.”

According to Nikki Grahame, the Shetland ponies are simply adorable. She said: “They are so beautiful! It’s absolutely brilliant and when the pull Cinderella’s coach onto the stage it melts your heart! According to the old saying you should never work with children or animals but the Shetlands will be such a massive hit and are so well trained I think I can manage to ignore that advice. It’s without doubt a fabulous panto and I’d advise everyone to snap up tickets now to avoid disappointment. Rehearsals have been great and the whole cast has come together like one big happy family. I love working with Andy Scott Lee and Dale Howard while Alison Crawford, who plays the title role is just stunning.”

Cinderella begins on Thursday, December 15th and runs until Monday, January 2. For tickets call the Box Office on 01978 841300 or visit www.stiwt.co.uk