A top conductor who led the Fron Choir to global fame is on a new mission. Ann Atkinson has launched an appeal for more men to join her new choir to perform  at the North Wales International Music Festival in St Asaph from September 22-29. The mixed choir is largely made up of singers who were in the choir that was formed especially for National Eisteddfod in Wrexham last year. Many of the members enjoyed the experience so much that they wanted to carry on singing with Ann who conducted them at the festival. Nearly 70 singers have already come forward but they are short of men to fill the ranks of the basses and tenors. 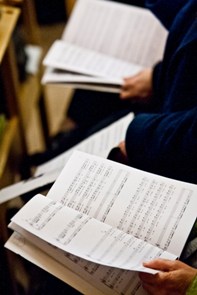 For those who would like to join, the next rehearsal is at Ebeneser Chapel, in Chester Street, Wrexham, at 7pm, on Tuesday, February 28. One of their first projects is to prepare for the International Music Festival which is celebrating its 40th anniversary at St Asaph Cathedral this year. They will be singing The Armed Man, a mass by the globally acclaimed Welsh composer, Karl Jenkins, in the presence of the great man himself. Ann, a talented mezzo soprano in her own right, is also the Artistic Director of the festival.

She’s delighted that the legacy of the Eisteddfod choir will live on at such a “magical occasion”. Ann said: “Even during the Eisteddfod, lots of people said they didn’t want the choir to come to an end. I also enjoyed the experience immensely having been involved mainly with male voice choirs. If there are any former members who haven’t yet joined and would like to, we would be delighted to see them as well as singers who were not members, particularly tenors and basses. I was the Musical Director of the Fron Choir for several years when everything took off for them and they became known as the world’s oldest boy band and I still have the Glyndwr Male Voice Choir. The mixed choir has a great deal of potential because we have a lot of singing talent and vast reserves of enthusiasm – but we are short of men, hence the appeal. A mixed choir gives a great deal more variety and more scope to look at different repertoires. More than 65 people came to the first practice  but we need more men so that we have the right balance of voice. The opportunity to perform The Armed Man is very exciting, it’s an amazing piece and I am sure it will be a magical occasion. Karl Jenkins will be there on the night and we will also be doing a portrait of him as a composer. It is a great way of celebrating the festival’s 40th anniversary and we will be unveiling our programme soon. I believe it’s going to be one of the very best if not the best ever because we have fantastic line-up of world class talent in the magnificent setting of St Asaph Cathedral.” 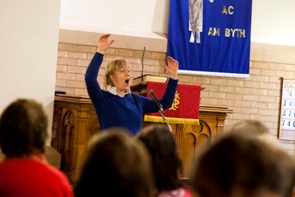 The cathedral was chosen as the venue for the festival by its founder, the royal composer William Matthias, who wrote the anthem, Let the people praise Thee O God, for the wedding of Prince Charles and Princess Diana. According to Professor Matthias, one of his greatest achievements was the creation of the hugely popular music Festival in 1972. He visited every potential venue in North Wales before deciding that St Asaph Cathedral provided the very best acoustic setting for the event.

Ann added:  “I have also performed in the concert hall at Sydney Opera House and, while it has a brilliant acoustic, I must say that St Asaph Cathedral is actually a much better venue acoustically.”

For more information about the choir, please contact Gareth V Jones by ringing 07772 601667.