Explore the Lake District via the Via Ferrata.

Update: 9th March 2011
It is with deepest sorrow and regret that we report the death of Honister Slate Mine owner Mark Weir in a tragic helicopter crash on the evening of Tuesday, March 8th 2011. The writer of this feature, Vera de Ruiter and the Editor, Peter Rosenfeld both had the pleasure of spending time with Mark and his family send their condolences to the Marks wife, Jan and their 3 children along with his extended family of his businesses, peers and colleagues.

It’s a crisp, spring-like morning in the Lake District, a clear blue sky and the sun is trying to warm the earth. The snowdrops are showing their heads while snow still covers the peaks of the mountains. A beautiful morning, but my instinct tells me I’m in a situation of life or death. My knees are shaking and my fingers are clinging on to whatever gives enough grip: I’ve taken up the challenge of the Via Ferrata.

Yesterday I stopped by just to turn my car around due to a roadblock on the Honister Pass. I suddenly found myself at the premises of the Honister Slate mine, a working mine near Keswick which produces high quality slate for customer all around the world. From roof tiles to worktops to house-number signs, no job is too big or too small. 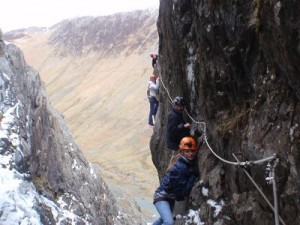 With a successful mine-tour already available for visitors they decided to add something more unusual to the experience, the Via Ferrata, which translates to Iron Road. It provides a way for the inexperienced mountaineer to climb to the top of Fleetwith Pike at 2216ft with a little help in the way of ‘steps’. It follows the route of the original miners track, but is just slightly ‘off track’ which means your climbing the rock face aided by some strategically placed metal handles and bars. Safely secured with your harness clipped to fixed steel cables you make your way up, but try telling that little voice inside that it really is ok….After a security brief together with 2 other adventurers we set off to the start of the Via Ferrata where we hooked ourselves onto the secured cable, still not really sure what to expect, and started the climb up to the top.

The Honister Slate Mine was the first in the UK to import the concept of the Via Ferrata, and is still one of only few of its kind in the country. Originally from Italy it got its name from the tracks that were built for and by soldiers in the Dolomites. It was here that Austrian and Italian soldiers had to defend their territory in the 1stworld war, and these isolated routes made it possible to move quicker through the mountains. The original tracks are still visible and used in the Dolomites, some of the hardest levels of the Via Ferrata. 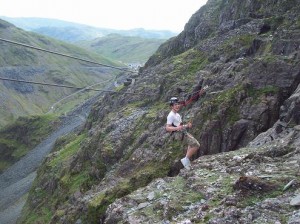 We continued to climb our way up, sometimes using old mine tunnels, the other moment climbing up a slate stack, hanging on to ladders, crossing bridges, until after about 1,5 hour we arrived at our ‘treat’. A thrill and adrenaline rush: The big Zip Wire. Hooked on to the wire and safely you’ll get a little reassuring push and before you realise you fly across to the other side of the mountain. A brilliant sense of freedom!

It took us a total of 2,5 hours to get to the top and back down to the mountain. From the top you’ll get, depending on the ever changing weather, magnificent views of the surrounding mountains and Lake Buttermere. On a clear day you can see as far as the Irish sea to the West, and on the other side the top of Scafell Pike is visible. Scafell Pike being the highest mountain of England it stands guard in the centre of  the Lake District.

It’s one of those experiences you could do over and over again without it ever being the same. One you’d plan a stay in the Lake District for. One that makes you want to travel to Italy and try the original ones over there. It’s one that, even if you do wonder why you make yourself hang of a mountain on a string, will make you feel ecstatic once you reach the top. It’s an accomplishment and a confidence booster.

The Honister Slate Mine offers this journey as a stand-alone activity as well as a full day package visit. You can combine it with a guided tour of the mines with enthusiastic and knowledgeable guides followed by lunch in the café on site. It’s an all-in-one attraction with a kick.

I can now say I’ve done it, but there will be a reason to come back in summer when they’ve planned to open Europe’s longest and fastest zip wire from the top of the mountain all the way down to the mine!

So all that’s left to say are those famous words: I’ll be back!

Honister Slate Mine & Via Ferrata – The Honister Mountain Adventure is open all year round. There are 3 different mine tours to choose from at prices starting at £9.75 for an adult, £4.75 for a child. The Via Ferrata can be taken on with or without the Zip-Wire experience (£25-£35) and needs to be booked in advance. Follow the link for more information and bookings.

Paradigm – Luxurious 5* self catering cottages in the heart of the Lake District. Sleeping up to 4 people you can stay here for a full week or a short break. Enjoy a genuine and warm Lakeland hospitality whether you’re on a romantic break, an active week away, or a relaxing time away from every day life. You can hitch a ride to the Honister Slate mines with Mark in the morning. Not the usual ride as he commutes to work in a helicopter!