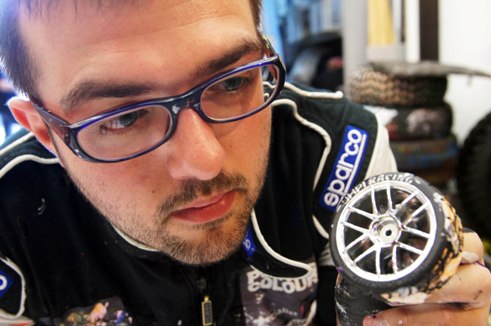 Artist and self-confessed petrolhead Ian Cook owns more than 200 cars – he likes nothing better than running his Ferrari 458 Italia through a pool of paint! And on Father’s Day he will be running a whole fleet of his vehicles through paint at Eagles Meadow shopping centre in Wrexham.

Ian, whose paintings have been featured on television’s Top Gear, is one of the star attractions at the special “Boy’s Toys” event on Sunday, June 19. The 28 year old has managed to turn his boyhood hobbies of painting and playing with radio controlled cars into an internationally acclaimed art form. He creates incredible works of art using model radio controlled cars as his paintbrushes.

The first to put him on the art world map was a portrait of F1 champion Lewis Hamilton for Reebok. It was the size of a three storey building and hung next to Tower Bridge in the run up to the 2008 Brazilian Grand Prix. He said: “I’ve always been a petrolhead and loved art, so it’s great to mix my two biggest passions. This is my first visit to Wales. I will set up about 8am and start painting about 10am and finish a complete work by 5 or 6pm.”

Kevin Critchley, the Manager of Eagles Meadow, just can’t wait to see Ian at work. He said: “His paintings are absolutely sensational and I’m astonished that he can create such fantastic work with remote-control cars. On the day, the other attractions will include a Formula 1 simulator so you will be able to get a realistic feel of what it’s like to be Lewis Hamilton or Jenson Button”.

Ian Cook, a former art lecturer who lives near Birmingham, is in huge demand world-wide and has just completed a project form Jaguar Land Rover, using just Jaguar Land Rover controlled cars. He explained: “It’s the familiar pop art commercial culture thing, using certain brands to create specific images. Would Campbell’s soups be as famous without Warhol? I’ve just come back from Barcelona where I created an art work for a group of insurance companies who provide paint to the car repair industry. It’s a niche market.”

Ian has a degree in fine art painting, but has always been a car enthusiast and even did work experience shadowing car engineers and designers. He hit on the idea of painting with radio controlled cars when he was given a RV car by a now former girlfriend for Christmas in 2006. “She told me ‘don’t take it down your studio, and don’t get paint on it’and the idea was born. From this I did colour wheels and abstract pieces, and then moved on to images, this included logos, portraits and cars. But cars were the most effective,” he said. 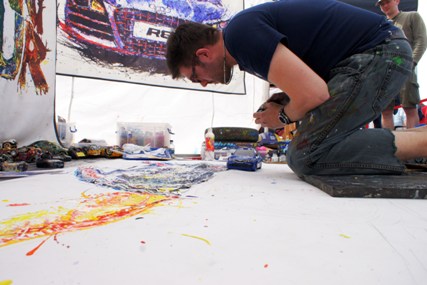 To create his paintings, Ian applies the paint to the paper and then runs the cars through the paint. All the cars are different sizes, different car tracks and different widths. It may seem an expensive way to create a work of art but Ian says it can actually work out cheaper. “The RV cars I use range from £10 to £25 maximum. If I wanted a decent sable paint brush it could cost between £80-90,” he said. When he has finished with the cars, he can even sell them on.

He uses a “fleet” of non-branded cars for most of his artwork, unless it is a specific commission which requires him to use a particular make of car to match the painting – such as the Jaguar Land Rover commission. Some of his work has appeared on TV’s Top Gear. He worked with Ferrari and used five new ‘paintbrushes’ supplied to him, including one of the car he was painting , the Ferrari 458 Italia, which Ian describes as a great looking car and a great paintbrush. His studio is the Heritage Motor Centre in Gaydon where he is currently artist in residence.