The Golden Chariot is, unashamedly, south India’s answer to the Golden Triangle’s Palace on Wheels; a luxury train which transports tourists in five-star comfort, between sites of cultural and historic interest. Every Monday of the season, the purple train pulls out of Bangalore’s Yeshwanthpur railway station to tour highlights of Karnataka before a last halt in Goa.

If you thought that luxury train travel belonged to the world of Agatha Christie and went out of fashion with the Charleston, think again. The concept of exploring India’s heritage sites from the opulent surroundings of a train with dining carriages, a lounge-bar and comfortable sleeping quarters is proving increasingly popular. The acclaimed Palace on Wheels – which tours attractions near Delhi, Rajasthan and Agra – rolled into service back in 1982 but remained India’s only train of its kind until Maharashtra’s Deccan Odyssey entered commission in 2004. The Golden Chariot’s inaugural journey took place during March of last year and a fourth luxury train, the Royal Rajasthan on Wheels, will enter service, in the north of the country, in the latter part of this year.

I spoke with Vinay Luthra, the Managing Director of the Karnataka State Tourism Development Commission who said, “This was considered for the last ten years…primarily we felt that the interior parts of Karnataka were very difficult to access. The accessibility was an issue. We did not have good roads, we did not have good airports or even good tourism infrastructure, like hotels, in places like Hampi, Badami and Hassan. So that was one reason we felt an up-end traveller would not be able to see and access these beautiful places.”

Karnataka borders the better known states of Goa and Kerala and has much to offer visitors. Reflecting its diversity, the slogan “One State, Many Worlds”, is used in promoting Karnataka and is emblazoned on the side of the Golden Chariot. A remarkable 609 of the India’s 3600 centrally protected monuments are located in the state, so perhaps I should not have been surprised to learn that historic and cultural sites make up the mainstay of the attractions visited on this trip. “A Luxury Train that travels 1600 years back in time,” was the boast in the information pack left in my sleeping compartment. 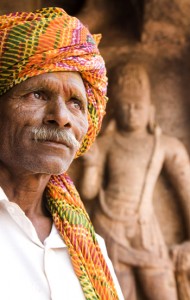 Two of the destinations, Hampi and Pattadakal, gave me an opportunity to explore UNESCO World Heritage Sites. We also stopped at Shravanabelagola, home to a thousand-year-old statue of Lord Bahubali and an important pilgrimage site for members of the Jain religion. I enjoyed Mysore’s sumptuous Indo-Saracenic style Amba Vilas Palace and the intricately sculpted twelfth-century Hoysala temples of Belur and Halebid. Goa, the train’s final stop, provided me with an opportunity to relax on the beach with a Kingfisher beer in my hand.

But for me the highlight of the trip was the chance to enjoy some of the India’s impressive wildlife at Rajiv Gandhi (Nagarhole) National Park. And, yes, I did drop the jungle jackpot and see a tiger. The overnight stay at the Kabini River Lodge was the only night we spent away from the train.

To reach these attractions and other sites of interest, we were picked up from railway stations en he route by an air-conditioned coach. It follows the train throughout Karnataka. Should anyone develop a case of ‘temple fatigue’ or want a break from the in-depth commentaries provided by specialist local guides there’s always the possibility of opting out of the excursions.

It’s also possible to spend a day in the Aragoya carriage, which houses an ayurvedic spa, a compact gym with cardiovascular stations, and a business centre with internet access facilities (though this latter facility was somewhat lethargic). The spa treatments, administered by specialist staff, include aromatherapy and Swedish massages, plus de-tox and de-stress packages. Despite the obvious space constraints of a railway carriage, the spa is equipped with two steam rooms. 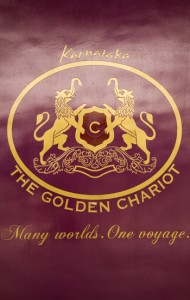 The train has eighteen coaches, including engines at either end. Eleven of the carriages are sleeping quarters named after the dynasties which formerly ruled over Karnataka. Each of the carriages has a full-time Coach Attendant who provides butler-like service. The sleeping cabins are accessed via sliding doors and their designs are influenced by the Mysore and Belur-Halebidu schools of art and architecture. But the use of light-coloured woods and flat-screened plasma television lends the cabins, which have en suite bathroom facilities, a modern feel.

For me the main highlight of the Golden Chariot was the great, well-presented food. The Executive Chef, Deepak Chaubey, does a great job of sourcing top-quality fresh and seasonal ingredients along the route. His team create their dishes using electric ovens and hot-plates, as gas cooking is not permitted on the Indian Railways. The cooks work in two narrow galley-style kitchens, one for Indian cuisine and the other for continental style preparations; both ar eoffered at every sitting. Meals – ranging from shepherd’s pie to traditional Indian thali meals – are served in two dining cars, named Ruchi (Sanskrit for ‘fine taste’) and Nalapaka (after a king and legendary chef from the Hindu epic, The Mahabharata), by attentive waiters who opened up to good-natured small talk as the journey progressed.

And after a good dinner what could be better than retiring to the lounge-bar, Madira, named after the nectar of the gods, to chat and unwind with a drink. Prices though, are on the high side.

That said, it’s reassuring to know that you are trundling towards the next attractions while conversing in the bar before retiring to bed.

Day 2 – Visit to Mysore’s Amba Vilas Palace, a safari in the Rajiv Gandhi (Nagarhole) National Park and an overnight stay at the Kabini River Lodge (the only night spent away from the train).

Day 3 – A boat safari then sightseeing at Srirangapatna and the Brindavan Gardens, followed by a cultural show and dinner at the KRS Hotel.

Day 4 – Visits to Shravanabelagola plus the Hoysala temples of Belur and Halebid.

Day 6 – Outings to the Chalyukan temple complex at Pattadakal and the sculpted caves at Badami.

Day 7 – Arrival in Vasco da Gama, Goa, and an excursion to the highlights of Old Goa, including the Basilica of Bom Jesus, a visit to a spice plantation at Ponda and sunset at a beach resort.