SWANSEA is part of a national trial to see if music lovers in the digital age still have a love affair with vinyl records. The music and video giant HMV has refitted its store in the City’s Quadrant shopping centre to accommodate vinyl 7ins and LP records – and retro-style record players – which are now on sale. London, Manchester and a few other big city HMV stores have stocked vinyl records since the 90s, but a resurgence of interest has persuaded the company to earmark 12 stores throughout the UK – Swansea is one – to start selling what many music purists have never stopped buying. 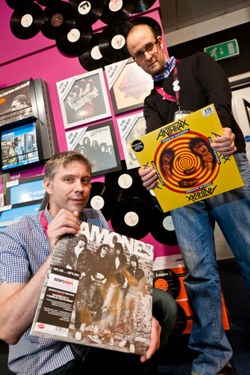 Swansea store manager John Hatfield, 41, is really “chuffed” at the news – he’s a vinyl connoisseur with a private collection of more than 2,000 records. He even has records and record covers on his walls at home. “The company is focussing on different locations to see if the success of the bigger stores in Manchester and London can be rolled out. We do get people asking for vinyl and there has been a massive resurgence of interest over the last 10 years a lot of it encouraged by the Indie culture. Buying vinyl has become cool with the kids and purists like me. We’re responding to what people want. I am old enough to remember it from first time around, when I started out in 1990 everything we sold was vinyl. We sold thousands of units then to DJs who used vinyl. I was in charge of selling all that so I’m really chuffed to bits that it’s coming back. I have about 2,000 bits of vinyl which I’ve been collecting since I was 14,” said John who has a 12ins Ramone’s record which is “incredibly” rare and possibly very valuable. Most of the 20 strong Swansea HMV staff are also “into vinyl” according to John.

But – the never ending debate – is vinyl better than digital? “It depends on your preference,” said John. “We will be stocking the higher quality 180 gramme vinyl and the resonance from these records is fantastic. For me there is no sound like hearing the needle hitting the record and then waiting for the sound to kick in. For a lot of people, like me, rather than treat vinyl as something cumbersome to be stored in the corner of the room, you use it to make a feature in your home. I have a lot of mine in picture frames which hang around the house in place of art.”

John says Swansea store will sell the frames for buyers to put their records and covers on their walls. They will also be selling retro-style record players, also capable of downloading the vinyl to the listener’s computer. Initially Swansea will be refitted to carry a stock of 1,500 vinyl albums. 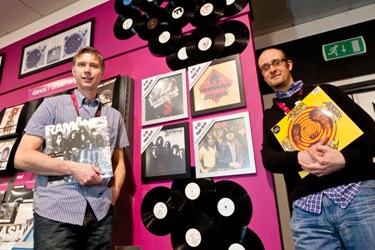 Gennaro Castaldo, Head of PR for HMV said: “Following a recent increase in demand – promoted in part by the huge success of Adele but also the indie folk appeal of such as Bon Iver – we sense a resurgence of interest in vinyl again and in the culture that surrounds it – often from younger music fans who are discovering its appeal for the first time. But you can also rely on core ‘fifty-quid-bloke’ enthusiasts and collectors who have grown up with vinyl, and whose commitment to it you sense will never fade. We are initially embarking on a twelve store trial from mid March, six in the north and six in the south, where the larger participating stores in particular, including Swansea, will see around 1500 titles racked out. If the trial proves the success we hope and expect it to be we will extend it to up to thirty stores and thereafter we’ll consider rolling it out to many of our stores in our 240-strong chain. It’s pretty much a niche product compared to CDs and downloads, but a reasonably healthy one that you can see carrying on into the future. It’s seen off tape cassettes, and you get the feeling it will also be around after CDs as well, mainly because it has an emotional appeal that goes beyond the functional, particularly when you consider the sleeve artwork and notes that come with it. Music fans love the idea of owning and collecting it, and it still makes a bit of a lifestyle statement if you’re into it. When you really think about it, we’re talking about an art form.”