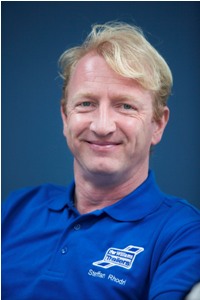 Harry Potter film star Steffan Rhodri has just returned from a journey of discovery to Denmark to find out how one of Wales’ most successful exports is used overseas. The popular Welsh actor, also well known for his role as Dave Coaches in Gavin and Stacey, would have been forgiven for using his familiar catchphrase “what’s occurrin?”. He visited an equestrian expert who uses an Ifor Williams Trailers horsebox as a mobile health clinic – not for treating horses but for treating their riders!

The trip by Steffan was to film for a new S4C documentary series called O Gymru Fach (From Wales), which is presented by the 43-year-old star of stage and screen and produced by the Cardiff-based television company Boomerang.

It looks at a range of Welsh success stories from food to skincare products to discover why they have become so popular across the world. With a network of 100 distributors world-wide, including as far away as Australia and New Zealand, Ifor Williams Trailers was an obvious choice for the series, which starts on S4C in April. Following a visit to the company’s factory floor, Steffan and his film crew travelled to meet horse lover and yoga instructor Sos Fejerskov-Quist at her home near Copenhagen to find out more about her business called Fit To Ride.

The former biology and gymnastics teacher uses a range of specialised treatments, including yoga, acupressure and breathing techniques, to treat horse riders and their ailments from her silver horsebox. Steffan, who took part in a charity horse ride from north to south Wales in aid of a cancer charity three years ago, was subjected to a rigorous health check himself by Sos as part of the filming. 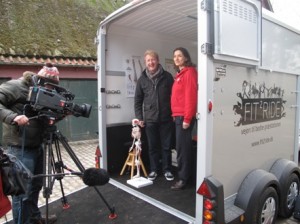 Sos said: “We discovered by asking Steffan to stand on two different weighing scales that he does not stand with equal weight distribution on both feet. He was amazed when I told him it was out by about five pounds. He has had a knee injury and I think he was compensating for this by putting more weight on the other side but he was amazed when he found out it was so much.”

The mother of three, who also breeds Icelandic horses, said the Welsh actor had been very pleasant to film with. She said: “It was really, really cold the day we were filming and he must have been freezing his fingers and toes off and we couldn’t go inside to get warm for a long time but he was just so positive all the way through and so comfortable to talk to that I almost forgot we were filming sometimes. I think he was excellent at thinking of ways to get the audience involved and he asked questions about my work which I would never even have thought to talk about and I think this will make the programme very interesting to anyone who watches it.”

According to Steffan, it was fascinating to follow the journey of the trailer and to discover that it was being used in such an interesting way. Steffan,  who plays Ministry of Magic employee Reginald Cattermole in Harry Potter and the Deathly Hallows, added: “Sos spent time helping me to correct my posture and I made the most of some of the equipment she keeps onboard – including her Balimo chair, a specialist stool type device which encourages users to sit correctly and in balance. I took a particular shine to the chair and would have brought it home with me if I could have done because I felt really good after using it.” 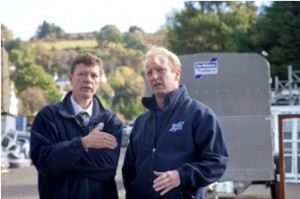 Assistant Producer Bethan Evans said each programme in the series would showcase three different products or companies. She added: ”The series will discover the amazing amount of skills and entrepreneurship that is alive in Wales through exploring the diversity of products we export from such a small country.”

Sos said her new horsebox had lived up to all her expectations. “It is so easy to use and I have so much room inside the trailer for all my stuff. It is really versatile too because I can open the ramp and invite people in to see what I do but then all I have to do is shut it all up and it becomes an entirely private space where I can treat people. It really is perfect for my needs.”

Andrew Reece-Jones, Design Engineering Manager at Ifor Williams Trailers, was pleased that the filming had gone so well. He said: “We really enjoyed Steffan’s visit to the factory when he came to film – he threw himself into the work when he joined the production line and gained the respect of the team. We are looking forward to seeing the programme when it is broadcast on S4C.”