Following the Way of St James to Santiago de Compostela 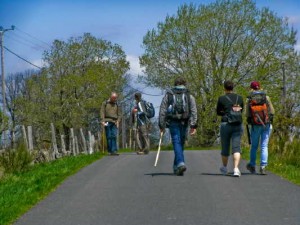 They used to say that all roads led to Rome, but in medieval times, people started going the opposite way.  All Christians, across Europe, were urged by the Pope to make the pilgrimage to Santiago de Compostela in the far North West of Spain to atone for their sins.

The route was known as the Way of St James and, a thousand years later, you can still follow in their footsteps, even if you’re not remotely religious.

Legend has it that a boat carrying the body of St James was shipwrecked on the coast of Galicia but the bones remained undiscovered until the burial site came to a hermit in a dream.  Santiago de Compostela became a holy city and the remains were interred in the cathedral in the 8th century.  The Christian church, keen to combat the forces of Islam and establish a rival destination to Mecca, encouraged its followers to visit the holy shrine. By the 12th century, pilgrimage was highly organized and a network of hospices along the various routes did great business.   Pilgrims also collected money along the way and donated it to the cathedrals and abbeys they passed. It was the start of global tourism.

Although there are four main routes through France, the oldest dates from 951 and starts in Le Puy-en-Velay.  It follows the old Roman Via Podiensis to the Pyrenees border at Saint–Jean–Pied–de–Port and takes about 5 or 6 weeks to walk.  I didn’t have that much time to spare so settled for a day on the spectacular Aubrac plateau near Nasbinals in the Lozère.  At over 1000 metres, it was pleasantly cool in the sunshine, and, in the fields, Aubrac cattle, a French breed adapted to altitude, quietly munched on grass amongst the daffodils. You know you’re on a religious route because there are crosses at every juncture and water fountains to slake your thirst and, of course, a constant stream of walkers glad to wish you “bonjour”.

A Pilgrim’s Lot is a Happy One 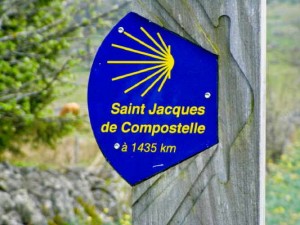 Pilgrims are a hardy lot and many I met were doing 20-30 km a day, which of course makes sense when you’ve got over 1000 miles to walk.  I could only manage a measly 12 km but it did whet my appetite for tackling the entire route.  Accommodation is plentiful on the way and is not just limited to hair-shirted hospices.  At the end of the day I checked in to the up-market La Borie de l’Aubrac, a converted traditional farm house with just five rooms, each one furnished to the highest standard.  And just down the road is the Buron de Born restaurant where you can sample Aligot, a dish originally devised by monks for hungry pilgrims.  It’s mashed potato with Tomme cheese, cream, butter, and garlic and, paired with a tasty Aubrac steak and a glass of red wine, is enough to silence any religious dissension.  Now I understand what they mean by pilgrim’s progress…