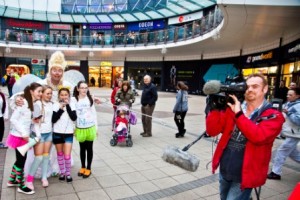 A shopping centre in North Wales has been sprinkled with lashings of fairy dust –  by a six foot three inch Fairy Godmother! Actor, presenter and producer Stifyn Parri had the crowds of Christmas shoppers in fits of laughter. He danced around Wrexham’s Eagles Meadow shopping centre in full costume, filming for his S4C show Seren Nadolig Rhos.

Stifyn, who hails from Rhos, has challenged the community to create, produce and perform a pantomime at the Stiwt Theatre all within just three months. And Stifyn, who is himself no stranger to the stage having spent two years in the West End playing the role of Marius in Les Miserables, said: “As the presenter and creative producer of Seren Dadolig Rhos I set the community a pretty difficult challenge and have to say how impressed I am with their efforts. “The show is already going out on S4C at 8.25pm on Tuesdays and is repeated, with subtitles, on Sundays at 4.30pm while the actual pantomime will be broadcast on Christmas Day. The pantomime, The Wizard, will be performed at The Stiwt on Sunday, December 4th with a matinee and evening performances.” 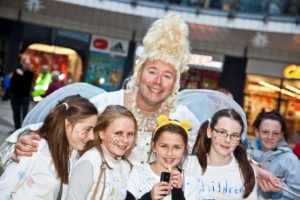 Cardiff-based Stifyn, who made the national news when his Brookside character, Christopher Duncan, was part of the first gay kiss to be broadcast on British television, says he’s really impressed with Eagles Meadow. He said: “I grew up in Rhosllanerchrugog so know Wrexham really well. I can see they have done a wonderful job with Eagles Meadow and it’s nice to see Wrexham thriving. We have had great fun filming at Eagles Meadow and the crowds of shoppers have been superb. I would encourage everyone to come along to the Stiwt and see the pantomime and to tune into S4C and watch Seren Nadolig Rhos.”

Amba Woodfine, 14, and Millie Jeffery, 13, both pupils of St Joseph’s School, were keen to be photographed with Stifyn in his fairy godmother costume. Amba said: “We come to Eagles Meadow every Saturday and there is always something going on. We have had a real giggle seeing a man, over six foot tall, dressed as a Fairy Godmother.” Millie added: “You never know what is going to be happening when you come to Eagles Meadow. I have enjoyed seeing the reaction of people to a huge fairy godmother.”

Katie Moss, Rachel Milhorn, Sophie Roycroft, all 11, and Imogen-Amy Hopkins, 10, of Farndon and Holt, were shocked to come out of the Odeon Cinema at Eagles Meadow to find Stifyn dressed as a Fairy Godmother. Rachel said: “Seeing such a big fairy godmother running about is so funny, everyone seemed to be having a good laugh. We had no idea what was going on when we come out of the cinema!” 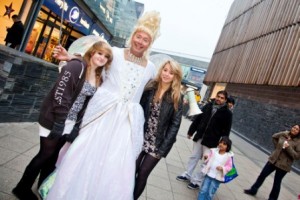 Castel Alun High School Sixth Form students, Lucy Jones of Cefn-y-Bedd and Shannon Vaughn of Hope, both 16, were a bit shocked to see a Fairy Godmother sprinkling lashings of Christmas cheer around Eagles Meadow. Lucy said: “It was a bit of a surprise but really good fun. I will certainly look out for Eagles Meadow on S4C. We come to Eagles meadow a lot and there always seems to be something different happening although this is the first time I’ve seen a huge fairy godmother!” Shannon agreed adding: “I’m doing Welsh at A-level and will certainly watch out for Seren Nadolig Rhos on S4C. We have had some really good fun watching Stifyn’s antics while they have been filming.” 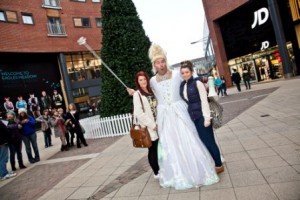 Wrexham students Aggie Wronska, 15 and Sarah Mathews, 14, couldn’t believe their eyes when they saw Stifyn, dressed as a fairy godmother, dancing around the Eagles Meadow Christmas tree. Aggie said: “I didn’t expect to see something like that today but it was really good fun.” Sarah added: “We like to come to Eagles Meadow to meet up with friends and do some shopping. Every time we come there seems to be something going on and today was a real laugh.”