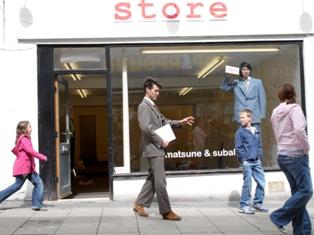 A new international ‘Store’ that sells world class performances is coming to Wrexham. For as little as 50p shoppers will be able to buy something which has been on sale in capital cities across the globe.

The Llanrwst-based Migrations contemporary dance and performing arts group, which draws on dancers from all over the world, will  set up shop at the Eagles Meadow shopping centre, in Wrexham, to perform their highly acclaimed work ‘Store.’ Over four days, April 25-28, performers will invite customers into their shop, show them a menu of more than 60 acts, invite them select an act and to make a purchase from as little as 50p, and will then perform for them – and passers-by.

Japanese born dancer, Michikazu Matsune, now based in Vienna, and Austrian born David Subal, now based in Paris, will fly into the UK and give performances over the four days, between 10am-4pm with some ‘shop assistants’ to help take orders from customers. It’s part of an events packed month for North Wales’ premier shopping centre which is striving to offer the public much more than just a first-class shopping experience.

“This has been performed in Vienna, Oslo, New York and Philadelphia, so to have Wrexham in the same company is great,” said Iwan Williams, a member of Migrations co-ordinating team. It will show that world-class performances can come to North Wales. Migrations had its roots back in 2004, initiated by Conwy county council which wanted to fill a void and bring high profile contemporary dance and performance to North Wales. Since then it has become an independent not-for-profit voluntary organisation and run as a community interest company, with Karine Decorne (corr) as its director based in Llanrwst and bringing in artistes from all over the world when needed. Store was performed last year at Bangor. People selected acts from the menu and paid between 50p and up to £20 for a performance. Some people stayed there all day watching performances which were often hilarious and very addictive – they wanted to stay and see what came next.”

The “stage” will be a shop unit in Eagles Meadow, but shoppers can watch through the window for nothing, and sometimes the performance spills outside. “At 50p it has to be the cheapest piece of original international art you will ever buy,” said Iwan. 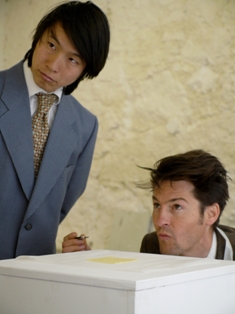 Meanwhile one of the biggest music festivals to hit North Wales will bring the sound of live bands to Eagles Meadow on April 19, 20 and 21. Focus Wales 2012 Music Festival and Conference was successfully launched last year in Wrexham, but this year it promises twice as much music, with a staggering 81 bands already confirmed to perform live music over the three days. Eagles Meadow is providing a shop unit for Music Wales to base itself and which will operate as a ticket sales shop for all the gigs and the music conferences.

Promoter Neal Thompson said: “Thanks to Eagles Meadow we will have a shop with a small exhibition and display of a wall hanging which children from Barnardos are preparing, there will be a music stall with CDs on sale along with tickets for all the events. And weather permitting some of the bands will be giving performances outside for the shoppers. “Wales Arts Council is behind us this year which has allowed us to expand considerably.”