From busking in the street to Buckingham Palace, Bruce MacGregor has fiddled his way to the top.For a failed car salesman who took to playing his fiddle on the street, Bruce is now a highly successful musician, recording artist, founder of successful music festivals – and whisky festival – and radio presenter. And he is the founder of the award-winning Blazin’ Fiddles, a band which will set alight the North Wales International Music Festival at St Asaph when they appear on September 26 at an evening concert sponsored by Artisan Windows of Denbigh. 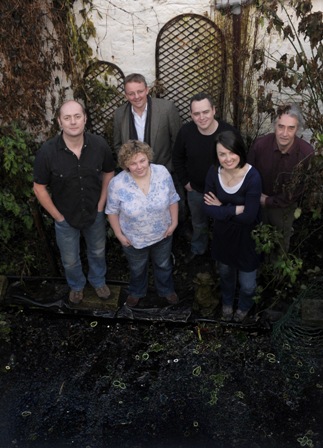 The six strong band, which includes two fluent Gaelic speakers, has performed at the National Eisteddfod and other Welsh venues before, and Bruce says there has been a resurgence of the fiddle in Wales in recent years – highlighted by the Fiddle Festival of Wales which stages its eighth national festival in Pembrokeshire this year.

Bruce graduated in Byzantine and medieval Italian history at Edinburgh University, realised that would not make him a living and then did post graduate business studies at Napier University. He hated it, so started selling cars at his father’s business in his home of Inverness but was hopeless, so went busking on the streets with a pal. He then went from an extra in a film to researcher for BBC Scotland and set up Blazin Fiddles as a show case band for a one off tour, but 14 years later the band is still going having played venues from the Albert Hall, Buckingham Palace, Glasgow Royal Concert Hall and countless village halls in between.

He’s made lots of successful albums and is still the presenter for BBC Scotland’s popular  Travelling Folk radio programme. He set up the award winning fiddle school called Blazin in Beauty in 2000 and started a roots music festival, Northern Roots, which is staged every year at his parents’ adventure and heritage farm near Inverness called Bogbain. His father, who sold the car business, also sells peat to the mushroom and whisky industries.

“We played in Buckingham Palace about 2002 for Prince Edward’s 40th birthday. It was a completely surreal occasion. We had to walk in, playing, from four different corners of the room as a surprise. He’s really a big fan of Scottish fiddle music. In the same year we played Cambridge Folk Festival, the Proms at the Albert Hall and Billy Connolly’s castle in Aberdeenshire – it was a mad year,” said Bruce.

“Music up in the Highlands, traditional music, is extremely strong. Classical music kind of held back Scottish music and took away a lot of the dialect. At the turn of the 20th Century there was a lot of classical influence on Scottish traditional music and fiddle competitions became rather stylised because the classical elements were easier to adjudicate. At one time there would have been 20-25 regional variations of fiddle music now you would be lucky if there are four. We wanted to make sure there were regional dialects in the music. Highland fiddle music was first mentioned in Mary Queen of Scots reign. A resurgence of the Scottish fiddle came in the late 18th Century when it became popular in ‘high society’ thanks to the likes of Sir Walter Scott. Although fiddle music is primarily linked to Scotland and Ireland, Wales had the ancient crwth fiddle for centuries. The fiddle again found favour in Wales in the 18th Century when there were an estimated 40 fiddlers on Anglesey alone. We have played the Eisteddfod, we played Cardigan and Rhyl and several times in Abergavenny. The fiddle has seen a resurgence in Wales in the last five or more years,” said Bruce.

The band members are all professional musicians who have their individual interests, fiddler Allan Henderson is musician in residence at a Gaelic language college and guitarist and fiddler Anna Massie is greatly in demand by other bands as a session player. Iain Macfarlane is an original member of the band and keyboard player Andy Thorburn has been with Blazin Fiddles for 13 of its 14 years, and fiddler Jenna Reid, who joined in the last couple of years, completes the line-up. 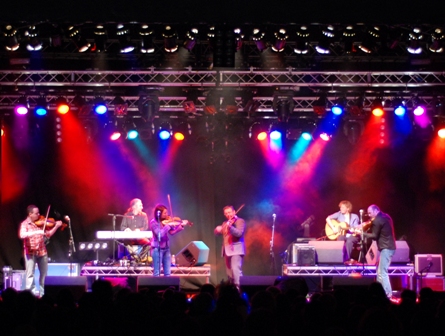 “I learned to play the fiddle when my dad took me as a child to the croft of an old guy named Donald Riddell. My dad said I’d expressed an interest in wanting to learn the fiddle but I have no recollection of that! I started to learn to play with him but never at any stage did I think a music career would come of it, but if it was not for that there is no way I would be doing music now or presenting a music progamme on the radio.”

This year’s festival opens on September 24 and runs until October 1. The first concert features the BBC National Orchestra of Wales, who appeared in the very first festival and have returned many times since, and baritone Roderick Williams. Strings feature strongly in the week’s programme, with artists including Welsh triple harp virtuoso Robin Huw Bowen, classical guitarist Dimitris Dekavallas, the ensemble Blazin’ Fiddles and the Vida Guitar Quartet.

One of the main attractions this year will be the world premiere of a new work by the royal composer, Dr Paul Mealor, who shot to global fame thanks to the sensational Royal wedding anthem he wrote for Prince William and Kate Middleton. Dr Mealor will the subject of an evening called Portrait of a Composer featuring Ensemble Cymru and the Aberdeen University Chamber Choir. Dr Mealor will also conduct a choral workshop for mixed choirs.

Among other highlights is a recital by the virtuoso pianist, Llyr Wiliams, from Rhos, near Wrexham.