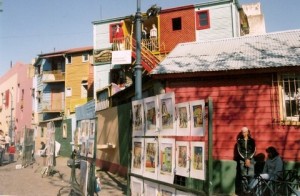 If you’re expecting South American chaos, the broad European-style boulevards and belle époque architecture come as a real surprise. This could be Barcelonaor Paris. And you will search in vain in the faces all around for hints of South American ethnicity. With their Spanish and Italian heritage, the citizens of Buenos Aires(known as porteños) consider themselves to have more in common withRome orMadrid than their poorer South American neighbours.Argentina’s stylish capital is a sensual place that serves up a hit of hedonism as potent as the tarry black espresso that its inhabitants like to sip in the grandeur of magnificently dilapidated old cafes.

Life is back on a more even keel than it was in 2001, when troubles with the basket-case economy came to a head, erupting in full-on street riots that led to deaths after the government blocked peoples’ access to their almost worthless savings. You’ll still see plenty of evidence of poverty – the ragged homeless sifting through trash to make a few bucks from recyclables, for example – butBuenos Aires’ central grid of streets is a safe place to get around on foot.

Take a stroll through the Recoleta district and you’ll see the well-heeled ofBuenos Aireschecking out shop windows stacked with designer tags, smart restaurants and elegant bourgeois ladies walking toy pooches. Hard to believe, in fact, that the city has bounced back so strongly from financial collapse.

Buenos Airesis a huge, sprawling city, so it’s a good idea to orientate yourself with a guided tour before setting off to explore on foot. 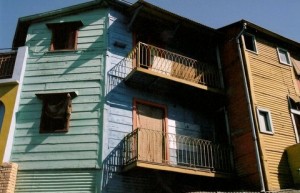 The gritty poverty-stricken dockside district of La Boca is the city’s most colourful barrio. You wouldn’t want to wander around the backstreets alone after dark, but the street known as the ‘Caminito’ is well-established on the tourist trail. Its street artists’ stalls and shanty houses of corrugated metal painted as gaudy as a gypsy fortune teller’s caravan have a garish end-of-the-pier quality. La Boca was first settled by Genoese immigrants in the 19th century, and the tradition of painting the houses in child’s paintbox colours was started by its inhabitants who used leftover ships’ paint to tart up the waterside slum. La Boca lays claim to be the cradle of the tango from the days when sailors pitched up in port looking – in no particular order – for booze, a brothel and a fight. Legend has it that, as they stood waiting their turn in the brothels, they danced with one another to act out a lustful pantomime of the pleasures awaiting them within.

The name La Boca will ring loudly with footie fans since the area will always be associated with the glory days of Diego Maradona when he playing for Boca Juniors before his bloated, coke-fuelled descent into the Michael Jackson premier league of fallen idols. For addicts of the Beautiful Game, a visit to the museum in the team’s ‘Bombonera’ stadium is an absolute must. All around in the streets, scruffy kids kick balls around hoping a scout will spot them and launch them on the same path that took ‘El Diegito’ to international stardom.

Plaza de Mayo is the city’s historic heart. During the filming of Evita, Madonna played to the crowds from the candy pink Presidential Palace, known as the Casa Rosada, following in the footsteps of Juan and Eva Perón and the ill-fated General Galtieri. 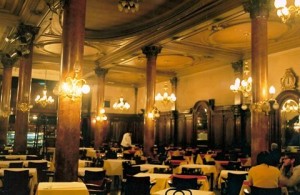 Don’t miss the atmospheric Sunday flea market in San Telmo. It’s paradise for rummaging through a mountain of bric-a brac and emerging with a delightfully retro soda siphon or antique crystal chandelier – the shopkeepers will even ship stuff back to the UK for you if you’re smitten by something too big to carry home. Bohemian Plaza Dorrego is the heart of the market – its stalls spill out into the cobbled streets all around and brilliantined busking couples done out in all their finery dance the tango for the crowds. One of the best places to explore for treasure is among the crumbling galleried courtyards of the Pasaje de la Defensa.

Teatro Colón is one of the world’s great music venues, andBuenos   Aires’ answer to La Scala with its palatial concert hall of marble, stained glass, frescos and mirrors. If you’re lucky or plan ahead you may be able to take in a world-class classical concert performance. Make sure to take a guided tour to get behind the scenes for a fascinating peek at the workshops where costumes and stage sets are made.

To see docklands regeneration Buenos Aires-style, check out the classy developments of Puerto Madero. The restored riverside warehouses are now home to des-res apartments for trendy porteños, and the city’s beautiful people who hang out in its cluster of achingly chic bars and restaurants.

Recoleta cemetery is where people come to track down the grave of Eva Perón among the avenues of towering marble vaults. Rather like the Père Lachaise cemetery inParis, it’s an elegant necropolis whereArgentina’s high profile stiffs are laid to rest.

Top 3 Things to do in Buenos Aires

Tango for Two – this slinky, sexy dance is most perfectly described as ‘the vertical expression of a horizontal desire’ – the tango is the very soul ofBuenos Aires. Learn to danceArgentina’s moody melancholy anthems with slick precision moves, eye to eye in a sinuous embrace. Glorious belle époque cafes such as Confiteria Ideal (Suipacha 384) and Café Tortoni (Avenida de Mayo 829) host tango shows and classes. 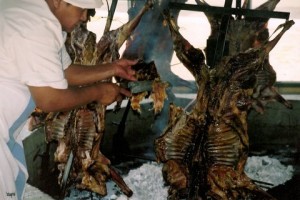 Stunning Steaks – It’s no wonder Argentinians are such dedicated carnivores, when they have the world’s best meat on their doorstep, freshly delivered from the Pampas and the endless plains of Patagonia. So make the most of the top-class beef and lamb and get stuck into a traditional meatfest at an asador or parrilla restaurant. An asador is the real deal. As culinary theatre goes, you can’t beat the sight of a whole sheep split down the middle, spatchcock-style, and crucified on an iron cross before being barbecued above an open wood fire, enclosed in a glass booth centre stage in the restaurant. Parrillas grill huge juicy steaks and other cuts over charcoal; order a parrillada for a mixed grill of various cuts of beef, offal and sausages such as morcilla or blood sausage. This is red in tooth and claw dining – unsophisticated, but probably the best meat you’ll ever eat.

Shopping – You’d better be packing plastic. The Argentinian peso is on a stronger footing these days, but there are still loads of bargains to be had. With all those millions of cows and sheep knocking about down in the wilds ofPatagonia, leather and wool are excellent value if you have a keen eye for quality. Off-the-peg designer labels are good value too. Florida, the main pedestrianised street is a good place to begin hunting – check out Galerias Pacifico for starters, the grandiose frescoed arcade built in 1891 is packed with big-name boutiques.