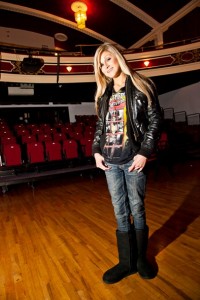 It was a tough choice – Christmas on Australia’s Bondi Beach or the former North Wales mining village of Rhos. Ex-Big Brother star Nikki Grahame spurned the sunshine down under for the chance to sprinkle some panto magic at the Stiwt Theatre. Nikki had booked Christmas morning flights to take her mum on the holiday of a lifetime. But she’s put her travel plans on hold after being offered the role of Fairy Godmother in Cinderella, this year’s Stiwt Theatre pantomime which starts on December 13.

Rebecca Griffiths, the manager of the Stiwt, is delighted that Nikki is joining the cast. She said the panto will have “…that extra wow factor with rich costumes, wonderful choreography and a few added little twists to the tale. Without a doubt this is going to be a magical show, even bigger and better than last year which was something new for Rhos and the whole Wrexham area.”

Nikki said: “How could I turn down the chance to play the Fairy Godmother? No girl would possibly say no to wearing a beautiful gown and waving a magic wand! I love panto and can’t wait to get started with rehearsals. I was taking my mum, bless her, to Australia for a three week break but we have put it on hold for a little while. We were leaving on Christmas Day morning from Heathrow. At least we have something to look forward to after Cinderella ends. I just get so excited about panto. Last year I played the role of the Princess in Aladdin down in Kettering so when I got the call and was asked to play the Fairy Godmother in Cinderella I jumped at the chance. A good pantomime really makes Christmas special and Cinderella is definitely the best story of them all. I am so excited about being involved. And I know some of the cast too which makes it easier. Andy Scott-Lee has been a good mate for a while and lives not far from where I live near Watford. I also know Dale Howard who was also in the Big Brother House in Series Nine and Alison Crawford who was a contestant in Grease is the Word. It’s a really great cast and I am sure we will get on like a house on fire once we get together and get started with rehearsals. I don’t think you can beat a real audience and although get a bit nervous I get a proper kick out of being on stage, it’s really wicked.” 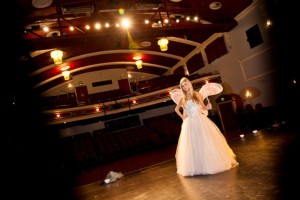 Nikki has been a rising star since she was voted the Best TV Contender at the 2006 TV awards, although she admits to being scared witless as she had to make an acceptance speech before a star-studded Royal Albert Hall audience. She has also been voted the second ultimate Big Brother contestant and the top female to have entered the Big Brother House in a public vote. Nikki said: “My life definitely changed after Big Brother Seven and I am always busy now. I’m still involved with Big Brother as I do some stuff on the Big Brother’s Bit on the Side show. I play a bit of a mock medical analyst, with a stethoscope around my neck, and comment on what the contestants are thinking! It’s a real laugh. I’ve also been a roving reporter for Big Brother Little Brother and got to interview Dustin Hoffman which was amazing. I was also a guest on the Jonathan Ross Show. I was so, so nervous but he was brilliant and made me feel so welcome. I was on the same show as Ricky Gervais, who wasn’t so nice because he thinks Big Brother is stupid, and Pauline Collins who was really lovely.  I have also done an advert for Domino Pizzas and one for a bingo company and I’ve done a show called Celebrity Soup on the E Channel which was cool.  I’ve also got something in the pipeline that is really big but I can’t talk about it yet in case it doesn’t come off.”

Nikki has also written a book, Dying to be Thin, which chronicles her almost lifelong battle with anorexia. She said: “It started when I was about eight I suppose. My mum and dad were going through divorce and my granddad died. I was also doing quite well at gymnastics and everything was pressure, pressure, pressure. Anyway I was in an out of hospital until I was 19 and I had a real battle on my hands. Luckily I am alright now and can do what I want. I eat out in restaurants, something I couldn’t do before and I haven’t had any hospital treatment for 10 years now. I wrote the book to put down my experiences and to encourage young girls who find themselves on the same slippery slope. The book did really well and was published in France, Germany, Canada, Australia, Japan and Holland as well as the UK. If I can use my profile to raise awareness of anorexia then that has to be a good thing. It is certainly something I am passionate about.”

And Nikki says feeling good about herself will certainly her tackle the fairy Godmother role in Cinderella. She said: “I haven’t spent much time in Wales but Andy Scott-Lee tells me it’s an amazing place and the audiences are really great. I’m certainly looking forward to appearing at the Stiwt Theatre. Seeing the smiling faces of happy children is what pantomime is all about and let’s be honest it will beat sitting on a plane for all those hours flying out to Australia!”

Cinderella begins at the Stiwt Theatre, Rhos, North Wales from December 13. For ticket information call the Box Office on 01978 841300 or visit www.stiwt.co.uk