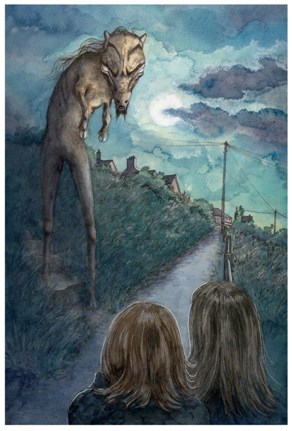 The fearsome Beast of Brymbo will rise again. The massive ghostly black dog will provide a menacing presence at the Smallest Folklore Museum in Wales. The pop up museum will be opening for three days at the Eagles Meadow shopping centre in Wrexham from Friday, August 17. Youngsters will hear the spine-tingling story how the beast, last seen in the 1970s, still menacingly haunts the lonely lanes of the nearby village of Brymbo in the dead of night.

Storyteller Richard Berry will be weaving this and other enchanting tales of myth and legend from across this region at the unique museum. Based in Cardiff, 65-year-old Richard trained as an actor and spent many years working in young people’s theatre companies. In the 1990s, he developed the storytelling side of his career and has since spun his fascinating yarns at venues across Wales and in Europe, where he has told tales in Croatia and the Austrian capital city of Vienna.

During his sessions at Eagles Meadow, when he will be based in his own tent, he will take on the role of the museum’s grumpy caretaker who encourages people to tell their own tales and then tries to top them with his own stories. One of those Richard hopes will spell-bind his Wrexham audience is the saga of The Gwyllgi, one of the Black Dogs of Welsh folklore. It was famously spotted roaming the Brymbo area in the early 1970s and subsequently became dubbed as the “Beast of Brymbo”.

The account of the local man who saw the chilling apparition as it walked along a lane leading into the Wrexham village echoes traditional descriptions of a creature often mentioned in Welsh folklore. The phantom canine is usually described as being black in colour, with a shaggy pelt and closely resembling a dog of the mastiff breed but much larger, about the size of a calf. The spook spotted in Brymbo has many of these characteristics, although it is said to have had a leaner outline, more like a lurcher.

The story of the Beast of Brymbo was uncovered by folklore expert Richard Holland in 1988 when he interviewed eye-witnesses who had encountered the scary creature. Ex-journalist Richard, the editor of the Uncanny UK website and the author of five books on ghosts and folklore, is delighted the beast is s being given another outing at the folklore museum.

Richard, from Gwernaffield near Mold, said: “It took me many years to finally track down the sightings of this bizarre apparition and I’m glad the story is proving of so much interest. I’m grateful to the witnesses for their kindess and courage in agreeing to tell me all about it in the first place.”

In Welsh folklore these dogs are known as Gwyllgi,  the best translation of which would be “Dog of the Twilight” – apt because that is the time when they are usually seen. These commonly reported yet inexplicable spectres have their counterparts in England, where they go by a variety of regional names, including Padfoot, Skriker, Trash and Black Shuck. In literature, they are usually simply referred to as Black Dogs.

There are other variants throughout Wales. In the Afan and Margam district of South Wales, for example, they were described as being blood red in colour. The most grotesque is that which haunted a green lane near Llysworney in Glamorgan, which was described as having the hind-quarters of a spotted dog but the head of a man. 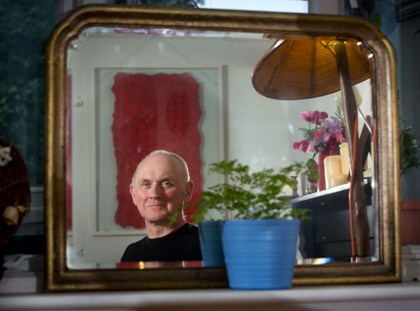 Storyteller Richard Berry said: “During my museum sessions at Eagles Meadow I will be telling the tale of the sighting of the Gwyllgi in Brymbo. It is a gripping story and I can’t wait to get there to tell it. The telling of stories is a very natural activity and I love to be involved in it. My stories can be short or long – anything from a few minutes to a couple of hours – but my aim with all of them is to enchant my audience, and that is exactly what I hope to do at Eagles Meadow.”

The museum has been organised by the Bakehouse Factory, a theatre company which specialises in cooking up spectacular interactive experiences. Creative Director Hannah McGavin can’t waite to bring the Beast of Brymbo back to life. She said: “We’re going to be having lots of pictures, things to look at, models that move and buttons to press and poems that you can listen to that really bring stories of Welsh folklore to life in a really interesting and tactile way. We will be mining a rich seam of storytelling from the medieaval mythological tales of the Mabinogion as well as more recent tales from Welsh folklore. The Black Dog, or Gwyllgi, will also feature in the Museum itself for all those who dare to look for him. We will have the story written within the museum, and a viewing box which, when the viewer presses the button, lights up to reveal a big scary face of a growling hound. The musuem is going to be the smallest in Wales but in my book small is beautiful, it is going to be small but perfectly formed. Everybody will be greeted by the receptionist who is very friendly, very funny, and is going to give everyone a kind of pamphlet from the museum to be able to walk around with. It’s going to be a museum cabinet of curiosities with lots of shelves and pictures – there’s even going to be a secret door leading to our story telling Yurt that’s going to be filled with warm sheep skins. We’ll also have a forgetful Curator who has lost some of the exhibits, and as you can imagine they are in a big flap so they’re going to need lots of help from the children to be able to find all of them.The exhibits are going to be lost somewhere around the shopping centre because the Curator will have been doing a bit of shopping before he came to open up the place. One thing is for sure, it’s going to be a lot of fun. I just can’t wait.”