Anglesey Island of love should get Royal Moniker 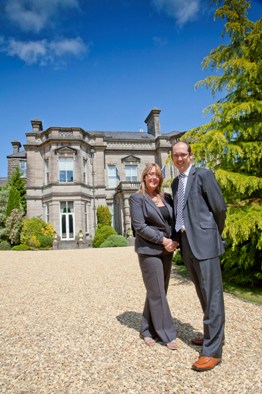 The “island of love” put on the world map by the Duke and Duchess of Cambridge should be re-named Royal Anglesey. Hotelier Neil Rowlands believes Anglesey owes the royal couple a huge debt for generating “absolutely priceless” publicity. So the Chief Executive of the 19th century Tre-ysgawen Country House Hotel and Spa, at Capel Coch, near Llangefni, says the majestic new moniker would be a way of recognising their immense contribution as well as the island’s other royal connections.

In fact, he’s so grateful to the Duke and Duchess that he is naming the bridal suite at the hotel in their honour. Leading to the Cambridge Suite is the luxury hotel’s new specially-designed carpet which also has a royal theme – it’s emblazoned with Prince of Wales feathers. As part of the tribute, the chef, Iwan Williams is now serving up royal wedding delicacies like Asparagus Tarts and Smoked Salmon Blinis. It can all be washed down with Pol Roger NV Brut Reserve Champagne which was quaffed at Buckingham Palace on the big day.

Guests at the family-run hotel can also use a specially prepared itinerary to visit places with royal connections on Anglesey. By an uncanny coincidence, the hotel has another link with the Royal Family. Tre-ysgawen Hall recently played host to the Queen of Lesotho, the landlocked African country that’s twinned with Wales. Prince Harry is patron of a charity that works in Lesotho and took his big brother out there to see it at first hand.

Other notable guests at the hotel have included Archbishop Desmond Tutu, Sir Richard Attenborough, along with pop stars JLS, Alicia Keyes and David Essex who got married at Tre-ysgawen Hall last year. Hollywood superstar Demi Moore was a regular visitor when she was filming on Anglesey a few years ago. But it is the “Kate and Wills” effect that has seen the popularity of Anglesey as a tourist hotspot skyrocketing. The couple have now returned to live on the island while Flight Lieutenant Wales continues his tour of duty as a search and rescue pilot with 22 Squadron based at RAF Valley.

The regal nuptials at Westminster Abbey, in London, caused a global media frenzy and dozens of TV crews from around the world just couldn’t get enough of Anglesey. As a result, Anglesey can now lay claim to being the UK’s most royal island with credentials dating back to the Tudors and the Plantagenet bad boy King John – not to mention the Welsh princes whose powerbase was on the island. 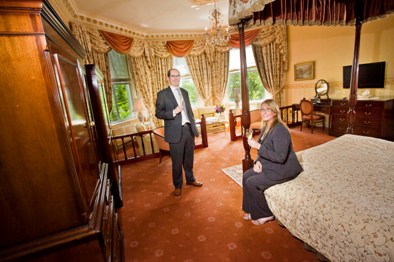 Mr Rowlands revealed the number of enquires and hits on the hotel’s website had “gone through the roof” since the couple’s arrival on the island. He said: “We have TV crews from all over the world coming to Anglesey and, like Tre-ysgawen Hall Hotel, many businesses are inundated with bookings and requests for information. You just cannot buy this level of positive global publicity – the Duke and Duchess of Cambridge are fantastic news for the island in general and the hotel in particular. Re-naming the bridal suite and calling it the Cambridge Suite in their honour is the least we can do as our way of saying a genuine thank you. It will remind visitors that Anglesey is now the island of royal romance and love.”

It was a sentiment echoed by Mr Rowlands’ wife, Emma, a fellow director of the hotel. She added:“The royal couple have obviously taken Anglesey to their hearts and Anglesonians have taken them to our hearts too. They are already proving to be fantastic ambassadors and the fact that they chose an Anglesey composer to write much of the music for their wedding speaks volumes about their love of the island. The Kate and Wills effect allied to our rich royal heritage which includes the Tudors and the Welsh Princes means we can now realistically claim to be the UK’s most royal island. Royal Berkshire and Royal Deeside in Scotland have already set the precedent and I think it would be entirely appropriate that we re-brand ourselves Royal Anglesey.”

Go on a royal tour

Anglesey can claim to be Britain’s most royal island with links to the royalty of England and Wales – from the Tudors and the Plantagenet bad boy King John to the Welsh princes whose powerbase was on the island. Edward I built the last of his great castles at Beaumaris to dominate Anglesey, the traditional home of the Princes of Gwynedd whose own palace had been on the other side of the island at Aberffraw.

Just further down the coast near Cable Bay is Barclodiad y Gawres, the Neolithic burial place of a prehistoric king with its stunning views down the west coast towards the great sandy sweep of Llanddwyn, voted by the Sunday Times one of the ten best beaches in Europe.

On Llanddwyn Island, is the tiny church of St Dwynwen, daughter of the fifth century Celtic king and Wales’s patron saint of lovers while another royal princess has her coffin in Beaumaris Parish Church. Siwan – or Joan – was a daughter of the notorious King John and was married to Llywelyn the Great. Her empty stone coffin has a plaque over it explaining that it was moved from the Priory of Llanfaes on the North Wales coast and had been used for many years as a horsewatering trough! 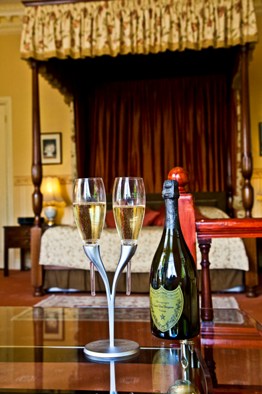 Also at Beaumaris is the Royal Anglesey Yacht Club which was granted its charter in 1885 by Queen Victoria who “danced the gallop” as a teenage visitor to the Marquess of Anglesey’s home at Plas Newydd, overlooking the Menai Straits. The Marquess commanded the cavalry at the Battle of Waterloo where he lost a leg to a cannon ball and his blood-spattered trousers are still at the National Trust property along with his and the world’s first articulated wooden leg on which he walked six miles a day once he returned home.

Wales’s own great contribution to the cavalcade of royal history, the Tudors, came from Anglesey from Plas Penmynydd in the village of Penmynydd between Menai Bridge and Llangefni and there are Tudor tombs in the church and a Tudor rose in the stained glass windows.

A king’s ransom was lost on the coast of Anglesey when the ship the Royal Charter was wrecked off Moelfre in 1859 with the loss of over 450 lives as it brought Australian gold miners and the fortunes they had made home to Liverpool.

William and Kate’s own part in the life of the island is also part of the itinerary, you can visit Trearddur Bay where they named the new lifeboat.