Airhead will be streets ahead in Shrewsbury

IT started as a dare – it ended as a life-changing career opportunity. Lee James kept telling his best mate it was possible to climb into a balloon. Being a likely lad from Oz’ when his mate ended up calling his bluff Lee – now known on the world entertainment circuit as Bruce Airhead – stepped into a balloon and a new career. His amazing performance with a six foot balloon, and some baby oil, can be seen at the Shrewsbury International Street Theatre Festival from Friday, September 2, to Sunday, September 4.

The festival, which was launched in 2005 when it attracted a crowd of around 6,000 to its four stages, or circles, last year brought in 27,000 visitors and this year is expected to reach over 30,000. This year’s event has among its sponsors the Shrewsbury Shopping Centres who will be sponsoring the stage at the Square, one of four venues around the town where the acts will perform. Nicholas Pitt, Centre Director of the Darwin, Pride Hill and Riverside Shopping Centres, said: “The Festival has rapidly grown to become a flagship event for the town and we’re delighted to be able to play our part in what is a fantastic weekend. The calibre of entertainer is very high and it is so colourful and so popular with visitors and residents alike – the town is really buzzing that weekend. It is vitally important to have events like this in our town centre, to add to our attraction. We have a wonderful and attractive town with great amenities and shopping and this is just one more reason to visit Shrewsbury.” 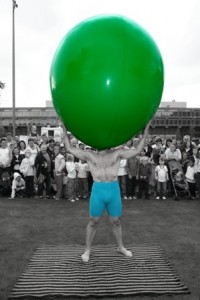 Festival Director Bill Ferguson, a performer himself whose list of engagements included Glastonbury, arrived from Canada seven years ago and founded the Festival which is in its sixth year. He said: “We’re delighted to be able to unveil a fantastic lineup of talent again this year and we’re grateful to sponsors like the Shrewsbury Shopping Centres for their support because local sponsorship is vital for us. Shrewsbury is a wonderfully picturesque town and the Festival creates a wonderfully happy family environment which people enjoy. It also brings in between £1.7 and £2 million to the local economy and is the town’s second biggest event and the biggest to take place in the town centre so it is important as well as fun.”

Lee has cut down the number of festivals he attends, but he has been to Shrewsbury before, received a tremendous reception, and had no hesitation in coming back to a “fantastic” town. Bruce Airhead has performed before the King and Queen of Sweden, even our own Prince Charles and Prince Harry. It has taken him from China to France, South Africa to Germany and to the muddy fields of Glastonbury Festival. “I’m Australian born and bred, from Melbourne,” said Lee. “I came here because of the love of a good woman! My wife, Sarah, was back-packing around Australia, as Poms do, and I was travelling around on a motorcycle. She got on the bike and we rode off into the sunset. I came here 20 years ago and we live in Stroud and we have three children Ruben, Frances and Freya, who are all Poms. They’re catching up with some of my tricks such as riding the unicycle, so maybe we’ll see “Son of Airhead” yet!”

He worked at anything when he first arrived and had always been able to do some magic and balloon modelling as a street entertainer. But after “mouthing off” once too often about climbing into a balloon, he was forced to give it a go. “It was my one and only eureka moment. I did it for a laugh but when I saw the video of what I had done, I thought there is definitely something here. The balloon is just like any balloon, basically a very large latex balloon, which costs about £20 a time. It’s very difficult and extremely hard work, physically very tough,” said Lee, who went full-time as a performer seven years ago. 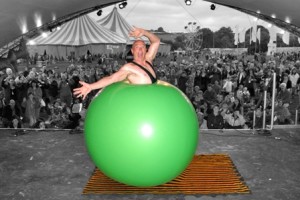 He inflates the balloon with a voice activated vacuum cleaner, strips off to lycra shorts and applies some oil so that he can pop his head inside the balloon. The trick of course, is to prevent the balloon from bursting. The spectacular finale has a canon shot of confetti pooping out of the balloon and the balloon bursting with Lee – or “Bruce” – emerging dressed as Elvis, although the act is adapted so that he can emerge as a monster, gangster, David Beckham, a sheik, cowboy, Superman….well you get the picture.

He has appeared on TV many times on shows such as Graham Norton, and TV talent shows. Ruby Wax said after watching his performance: “I wonder what happened during your birth?” He’s just returned from performing in Egypt, where the heat made his act extremely demanding. And he has a gig planned for Holland, where he will be performing seven shows a day for five days.

“I’m going to keep going with it as long as I can, who knows what the future will bring, right now I’m just riding the wave. If it had not been for my mate and that dare, who knows what I would be doing,” said Lee.

Check out all the acts and venues for the festival at www.shrewsburystreetfest.co.uk