Flintshire – its past ploughs £750k into its future! 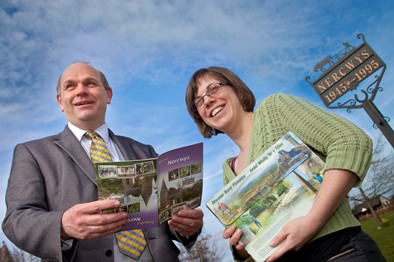 A project that celebrates what makes Flintshire special has ploughed three-quarters of a million pounds into the county’s economy in the past two years. Flintshire Sense of Place has been one of the biggest and most diverse of a raft of schemes totalling £2.4 million which have been run by rural regeneration agency Cadwyn Clwyd. The money has come from the Rural Development Plan for Wales 2007 – 2013, which is funded by the Welsh Assembly Government and the European Agricultural fund for Rural Development. Sense of Place Project Officer Keira Derbyshire has overseen almost 40 separate ventures, to celebrate and commemorate the people, the history and the culture of one of the smallest but most diverse counties in Wales.

She said: “It’s been very exciting to be involved with this and to get down to the detail of what the people of Flintshire feel is special to them in terms of their heritage and culture. This is a county that is one of the most industrialised but which also has a thriving agricultural sector and a wealth of history from pre-Roman times through medieval castles and the industrial revolution to its part in the development of the atom bomb in the Second World War.”

The Sense of Place Project has seen major studies undertaken of Talacre and Gronant and Mold with a view to helping map out their future development and to realise their economic potential as well as a series of community booklets produced to celebrate eight different rural communities in the county. Expenditure has ranged from £63,000 for the Talacre and Gronant Masterplan and £50,000 for Caergwrle Castle improvements to £1400 for Buckley Common Welcome Boards. One of the most significant projects has seen a series of eight booklets produced which describe the features and history of individual communities within the county. These will provide a valuable resource both for local people and for tourists to the area while the research which has been involved in each booklet has involved all sections of the local community. The last in the series covers Nercwys and was launched in March and it joins earlier works on Caerwys, Gwernaffield and Pantymwyn, Hope and Caergwrle, Whitford, Northop, Nannerch and Ysceifiog, all of them assembled in a special wallet.

Another scheme has seen a former shepherd’s cottage uncovered from the woodland at Coed Nercwys, involving local schoolchildren, the Forestry Commission and the Clwydian Range Area of Outstanding Natural Beauty in reclaiming the ruined building and the walls of the paddock. The paddock had been transformed into a wild flower meadow with its walls rebuilt in traditional style and a time capsule buried in its walls by children from Nercwys Primary School.

It’s not just the rural and agricultural heritage that has been celebrated – the shipbuilding traditions of Saltney Ferry have been commemorated in a spectacular piece of artwork on permanent display outside the town’s Morrisons supermarket. Funding releases through the Sense of Place project enabled local school students to get involved in the design features of the sculpture.

Keira Derbyshire added: “There will be funds available to progress much of the work that has been carried out with Community Key Fund grants to facilitate the development and improvement of village facilities. Flintshire County Council also has money approved for village enhancements, including streetscape enhancements, and this could be used to implement some of the recommendations made in the Talacre and Gronant Masterplan and the Mold Sense of Place Study.”

Tourism Partnership North Wales’s Regional Strategy Director Dewi Davies is delighted with the commitment to Flintshire and said: “There is so much that Flintshire has to offer from the moment visitors cross the border from the Dragon on the road embankment and the Flintshire Bridge. And there are characters too that make it what it is, people like Thomas Pennant, William Gladstone at Hawarden and Daniel Owen, of Mold, the Welsh Dickens. Then there’s the incredible scenery from the Dee Estuary rising up to Halkyn Mountain and the fantastic landscape of the Clwydian Range Area of Outstanding Natural Beauty. It all links very well with our Giants North Wales which covers the whole of the region.”