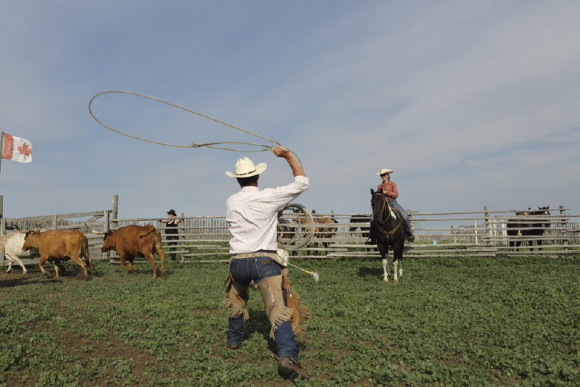 When it comes to cowboys and ranching I usually think of the USA rather than Canada. However, a little more than 100 miles north of the 49th Parallel, the border between the two, I meet a man in a white Stetson who changes that.

George Gaber looks like one of the goodies from an old Western. He’s tanned, has a firm jaw, is rugged yet he’s impeccably polite. The fellas I’m with like him because he’s living the dream and the women I’m with are swooning, saying he is their dream.

George, 49, is the owner of La Reata Ranch in the vast province of Saskatchewan. His land rolls for 5,000 acres around the South Saskatchewan River. Nine miles of his ranch fronts Lake Diefenbaker, a premier fishing destination known for its trophy fish; the world’s largest rainbow trout, a 43.6lb whopper, was landed here in June 2007.

La Reata is a working cattle guest ranch. A maximum of 20 guests can stay at any one time. George prefers to keep the number of visitors to 16, so that people can make the most out of their visit. The majority of people come here primarily to spend time on horseback, riding trails on the ranch.

We wander over into the tack room barn, which smells of leather and the scent of horses. Saddles, bridles and straps are ranged neatly on the walls. Country and Western music plays on a radio. “Everyone grooms their own horses once we’ve taught them what to do…Everybody loves it. They bond with their horse and that’s the main thing. It’s not just going into a resort where the horses are sitting there waiting, saddled up,” says George, grinning.

“We have 23 horses at the moment. That’s not enough in the summer and too many in winter,” he says laughing. “They have about seven months off.”

Summer temperatures in Saskatchewan soar beyond 30°C but the winters are long. “Last year was bad, it was -52°C. That was really cold…that was with the wind chill,” he explains. “We had about a foot of snow. We always get wind with the snow and that clears the roads.”

I’m visiting La Reata on a warm summer’s day and I can’t imagine snow here. Long prairie grass sways in the gentle breeze that ripples the surface of the lake down by the saloon. As we head over there I notice that George even walks like a cowboy. I put that down to his boots.

A sign on the saloon door says “Cowboys – leave your guns at the bar.” I pause to photograph it and George shoots me a grin. Inside, the saloon is like the set of a Western movie with creaking wooden floorboards and a bunch of rustic charm. “Grab yourself a cold beer from the fridge there,” he says. An old revolver hangs at the bar. Battered Stetsons and old cowboy boots are used for décor.

I can tell George loves running the ranch. He has the confidence of somebody who has found their calling in life. As we chat I learn he opened La Reata in 1996.

He tells me that though people come here for riding holidays I shouldn’t forget this is a genuine cattle ranch with 130 pairs of cows and calves, a number of bulls plus around 20 long horned cattle.

“A lot of people get mixed up with a working ranch. They think a working ranch means you have to actually, physically work. That’s not the case. This is a working cattle guest ranch. We have the cattle – every guest has a chance to participate – it’s not just a tourist attraction. You have the chance to get involved and help but it’s not like you have to get up at 6.00am and start working,” explains the ranch owner.

“You have the chance to help with fencing, spend a lot of hours in the saddle and do the round-up, wrestling calves. I do the branding myself but people can put the ear tags in,” says George, who taught himself most of the skills needed for ranching.

“Do you want to try your hand at cattle roping?” he asks.

I feel obliged to accept the challenge. In a corral he hands me a lasso. I attempt to spin it over my head, the way I’ve seen in Westerns, but the loop closes in on itself. He gives me a quick lesson in what to do then throw my rope. It lands nowhere near a calf. On my third attempt I finally get my lasso to land on a calf and pull it in. It’s a lot harder than it looks in movies.

It turns out I’ve earned the opportunity to go horse riding. A huge horse is ready for me. I’ll just be heading out for a couple of hours, but normally the daily rides are much longer.

“We ride from three hours up to six or seven hours, depending on what the guests what to do. The other day we went out, it was about two o’clock and I asked if people wanted lunch. They said, ‘Ah, we’re not hungry,’ so we headed further west to check the cows. It turned into a seven hour day in the saddle. Everybody was really tired the next day but I guess it was a great experience for them,” says George with a smile.

“You have to see this place,” he says with enthusiasm. “We are coming back over the hill, then you see the river valley and the lake is full and it’s almost like you are riding into a painting,” he says about what lies ahead.

I pull myself up over the horse’s back and onto the saddle. I guess if this was a Western we’d be riding off into the sunset.

See the Tourism Saskatchewan and Canadian Tourism Commission websites for further information about outdoor activities and attractions in the surrounding area.

Flights between Manchester and Saskatoon, the closest major airport to La Reata Ranch, are available from £695, in economy class, flying with British Airways and Westjet.