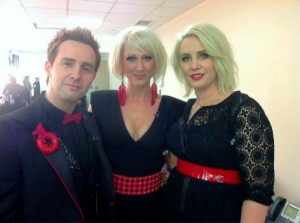 The reborn pop group Steps have been given some extra glitz and glamour by a talented ceramic artist from the Conwy Valley. Steps are wearing spectacular, outsize jewellery made by award-winning Catrin Mostyn Jones, from Maenan. The group’s reunion tour is a sell-out and Catrin’s colourful creations are featured in the programme.

Catrin,  35, is a friend of group member Ian ‘H’ Watkins and his partner, West End actor  Craig Ryder, who live in the area. She was thrilled when Steps’ stylist got in touch because ‘H’ is such a big fan of her work, as is fellow group member Lisa Scott-Lee, who hails from Rhyl. Singing star ‘H’ explained: “Catrin’s designs are so exciting and original. I really enjoyed wearing the piece, you can see the brooch in our tour programme.”

According to Catrin, none of this would have been possible but for the “fantastic” help her company, Vivid Ceramics, has received from the rural regeneration agency, Conwy Rural Business Support. Catrin said: “The fact that Steps are wearing my jewellery on tour in front of hundreds of thousands of people is a brilliant showcase for Vivid Ceramics. The fact that I have been able to reach this point is due in no small part to Conwy Rural Business Support, they have been fantastic. Members of their team have given me invaluable help in relation to my website and how to bring it up the Google rankings, putting a business plan together and securing funding for match funding to buy a new laptop. I’m a creative person so the world of business is a potential minefield and Conwy Rural Business Support have been essential in avoiding pitfalls that I would not have seen coming”.

A farmer’s daughter from Melin-y-Coed, near Llanrwst, Catrin spent more than a decade in the North West of England after graduating in 3D design at Manchester Metropolitan University. Apart from the jewellery, Catrin makes wall hangings, free standing sculptures,  lighting and public art. She was drawn back to the Conwy Valley 18 months ago by “hiraeth”, a longing to return to her roots and the spectacular scenery that inspires her work. It was also an opportunity to reconnect with her school chum Craig, who went on to find fame as an actor in the West End and on S4C.

Catrin said: “It’s also really lovely to have the support from ‘H’, he loves my work personally and he’s a very creative person himself – he’s a really good painter. Just before November last year I was approached by Steps’ stylist in London to create some broaches and some bangles for the group. One of them was for a Christmas appearance that steps were on the Alan Carr show on Christmas Day. I was given the brief of their colour theme was red and black, so I turned it around n 24 hours. As well as being featured on television, the jewellery is also pictured in the group’s tour programme. The exposure has been fantastic.” 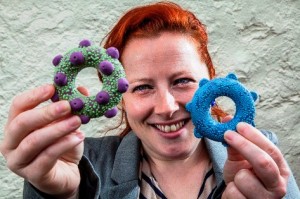 Catrin has just received another bit of good news. She’s won a commission to create a piece of public art for Conwy County Borough Council. Her ambition now is to continue to develop Vivid Ceramics and take on members o staff. She added: “I’d love to be able to expand the company so I spend more time on larger pieces, larger commission work.”

Conwy Rural Business Support is funded through the Rural Development Plan which is financed by the EU and the Welsh Government. They provide a free services to micro businesses, employing 10 or less people, offering advice, marketing opportunities and practical guidance on how to secure funding. According to Anna Openshaw, the Project Officer for Conwy Rural Business Support, it’s been immensely rewarding to see Vivid Ceramics flourish under their guidance. She said: “It’s really satisfying to seeing creative people like Catrin being successful and developing their business and the fact that her jewellery is being worn by Steps is really exciting.”

For more information about the support and advice that’s available to small businesses in rural Conwy contact Anna Openshaw either by emailing  conwyruralpartnership@conwy.gov.uk or ringing 01492 643159.