Visiting and Staying in Gdansk

My first impression of Gdansk from my airport bus window was I had arrived late at a party where the band had finished and all that remained were wandering people picking out the leftovers. Possibly the legacy of cold war Communism or even reminiscent of just 80 years ago when I would’ve found myself in the Free City Of Danzig, an independent state with its own passports, currency and stamps. The fate of Danzig was sealed by the Germans in 1939 when World War 2 began, but that’s another story…

My hotel, the Villa Angela (ul. Beethovena 12, 80-171. Tel: 058 302 2315) was a small friendly, offering opposite a bus stop taking you the 2km journey to the City Centre. The same street was littered with similar hotels that are sure to offer similar quality, service and value. 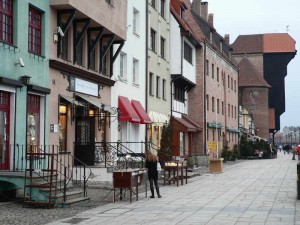 The City Centre measures approximately 1 square kilometer and can easily be explored in 2 days, including time to browse the many unusual shops selling an amazing array of amber, both in lumps of raw chunks through to carefully crafted jewellery and ornaments. There is a well defined, relatively short, circular City centre route.

Starting at The Upland Gate and heading through the Golden Gate the main street unfolds (Ulica Dluga) with its colourful architecture and magnificent sculptures climaxing at the magnificent Green Gate at the river. Turning left here and following the riverbank gives spectacular views of the Maritime Museum and the amazing Crane, one of the defining symbols of Gdansk dating back to 1444 as a rebuild of the original 1367 monster to load passing ships at the quayside.

Don’t miss the Roads To Freedom exhibition (ul. Waly Piastowskie 24. Tel: 058 308 4428) charting the course of events that began with the sacrifice of Poland to the Soviets at the end of WW2 to the formation of the 3rd Polish Republic in 1989. There’s plenty of Lech Walesa here who still remains the gloriously moustachioed public face of Poland. Close to the museum are the famous Shipyard Gates, still active today. Take some time to read the many personally delivered flowers and plaques that still decorate the gates in memory of the many that died in pursuit of freedom. The monument overshadowing the gates stands as a permanent reminder of this amazing cold war chapter.

Gdansk is bustling with eateries fiercely competing with each other ensuring great quality and service. When in Poland, do as thee Polish do with local dishes being cheap, tasty and table-creaking under the weight of quantity! Potatoes, meat, cabbage, pancakes (both savoury and sweet) are all on the menu as is Borsch, Zurek, Bigos and the deadly Flaki (tripe).

Try Swojski Smak (ul. Heweliusza 25/27. Tel: 058 320 1912) where the kitchen must double as a slaughter-fest with the heaps of knurled bone piled on empty plates all around.

Also, Kresowa (ul. Ogarna 12. Tel: 058 301 6653) with a menu dedicating itself to Polands lost Eastern territories served by waitresses dressed in traditional garb. The tea drinking culture is very different from the UK, served in a glass, usually too hot to handle, with the string of the tea bag hanging out and no saucer forcing the spoon to be left in the glass. Watch your eyes!

Cafe Absinthe, (ul. Sw. Ducha 2 Teatr Wybrzeze. Tel: 058 320 3784) tucked neatly out of view behind the theatre and well worth the search! Once you’ve penetrated the strange green lingering smog and found a seat in this busting small single-room pub you can sample most of what Poland has to offer in the way of liquid refreshment from Goldwater to Absinthe, flavoured coffees to wild hot chocolate compilations. Try a traditional Polish Vodka, ordered by the gram! Don’t forget the local brew, Tiskie Lager!

For the more adventurous night owl (so I had to try this!) the Kabaret Ewan (ul. Tkacka 27/28. Tel: 058 301 1441) is full of half dressed angels floating amongst the tables trying to rise the devil in you, all whilst watching a tame and slightly un-choreographed show. Great fun though!

Strutthof prison of war camp (Muzeum Strutthof w Sztutowie Muzealna 6, Sztutowo. Tel: 055 247 8353) is a soul-touching experience. The camp and museum are free but the optional multi-lingual audio guide is well worth it as was the adventure of the 1-hour journey there where, once out of Gdansk, “real” Poland can be sampled, so-be-it through a misty bus window!

Using the old, but highly efficient, Tri-City Railway you can access:

Gdynia with its bustling shopping streets where souvenir bags miraculously fill up.

Sopot where the high class hotels under endless building work reminds you of any pre-season deserted seaside resort. The pier was a real treat though! Built in 1827 it’s the longest in the Baltic stretching for 511mts and every meter is worth it just for the birds flying eerily inches above your head waiting for an accidental crumb or two! You can? miss the Crooked House, emulating something from Disney in Florida. It was opened in 2004 and is an award-winning higgledy-piggledy construction inspired by fairytales. The 4,000 sq. meter building containing a selection of high-class shops is certainly worthy of a call-in but Gdynia shopping was cheaper!

Oliwa, with its Holy Trinity Blessed Virgin Mary & St Bernard’s Church, better known as Oliwa Cathedral. It was first erected as a Cistercian shrine back in the 13th century and has suffered more fires than Guy Fawkes started but somehow survived with the Baroque fixtures you admire today. The Cathedral is best known for its massive organ comprising 7,000 pipes and decorated with movable angels and brightly painted stars. If you visit any day at noon you’ll to be riveted by its magnificent sound as a 15-minute concert (donations) performs.

If you’re thinking of going to Gdansk in springtime and you want to enjoy the un-cluttered ambiance and great value on offer, you’re only two more springs to do it (this year & 2011) because Poland achieved the impossible when it landed the Euro 2012 Football Championships with the aid of football-mad Prime Minister, Donald Tusk. This event will, invariably, put Gdansk on the map with the relatively new-found capitalism culture exploiting the masses as they arrive. Because of the competitiveness customer service is good. Most speak English as are menus, public signage, guide books and brochures. I never felt unsafe and didn’t experience any form of conning or ripping off.