One of the world’s most celebrated cellists will be on a  quest for perfection when he returns to a top music festival. Virtuoso Julian Lloyd-Webber will be aiming for a flawless performance when he plays at the North Wales International Music Festival at St Asaph Cathedral. He will open the week-long festival on Saturday, September 22, by performing several pieces by  the British composers, John Ireland and Frederick Delius. 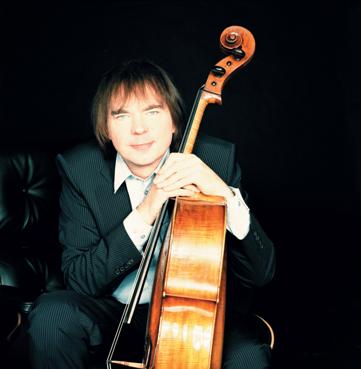 Lloyd-Webber, 61, is looking forward to helping the festival celebrate its 40th anniversary – not least because of the cathedral’s excellent acoustic qualities. This year’s festival will also feature the world premiere of a new work by the internationally acclaimed composer Karl Jenkins. The work was commissioned by the festival to celebrate their anniversary and the granting of city status to St Asaph by the Queen to mark her Diamond Jubilee year. It will be played by royal harpist Hannah Stone.

Lloyd-Webber said: “I have played in St Asaph Cathedral before, possibly around five years ago, it’s a wonderful setting with very nice acoustics. I performed alongside harpist Catrin Finch. I always enjoy playing in Wales. The Welsh, as a nation, have such an incredible affinity with music in general. One only has to look at the wonderful male voice choirs that are so popular, and rightly so, in Wales. I have always found North Wales audiences to be very appreciative and very knowledgeable too. I think audiences know what they want and are quick to show their approval.”

And Lloyd-Webber says he is more than happy to see classical music’s popularity seemingly on the increase. “We are currently living in tough economic times so perhaps you’d expect audience numbers to fall away. However, that’s not what we are seeing at all. People seem to be coming out to listen to, and enjoy, live performances. It is true though that classical music is now being enjoyed by a younger audience who seem to appreciate the music and how it is performed.”

Lloyd -Webber has been described as the ‘doyen of British cellists’ but as a youngster his first instrument was in fact the piano. He said: “My parents were both very musical and in fact my mother was a piano teacher. She sat me down and tried to teach me but I have to say I was hopeless and hated it. I just didn’t enjoy it at all. I went to a concert with my parents and spotted the cello and thought that’s it, that is what I want to learn. Right away it felt natural and I was immediately at home with the instrument. I’m so glad I made that choice as it has given me an extraordinary career and you know, I enjoy playing and performing now more than ever. Now there is no real pressure, no need to prove myself anymore.”

He added: “Having said that, every concert, every performance is something new, a new experience and anything can happen. The problem is as a performer you are always looking for perfection. And of course you can never achieve it, not really, there is always something you could have done better or interpreted in a different way. I suppose that is what keeps driving me on, that impossible quest for perfection. However, I suppose that is also, in a way, the beauty of live performance. I’m always more at home in front of an audience than I am in a recording studio.”

And Lloyd-Webber, who, in 2001, was granted the first every London Underground busker’s license, says he prefers to play from memory whenever he can. He said: “I always think of a music stand as a barrier between myself, or at least my cello, and the audience. I want them to see as well as hear the music and you can’t do that with a great big stand in the way. Of course, there are occasions when I have to use a music stand but I prefer not to when I can. I am not a composer but a cellist, yes, I have written a few short pieces but I have always preferred playing. So I learn the work and prefer to play from memory.”

And the North Wales International Music Festival will allow Lloyd-Webber to celebrate two of his favourite composers, John Ireland and Frederick Delius. He said: “I will be playing some pieces by other composers during the evening. However, both Ireland and Delius are among my favourite composers, particularly when it comes to British composers. And in a way it’s a celebration of two important anniversaries. Firstly, it is 50 years since John Ireland’s death in 1962 and it’s also 150 years since Frederick Delius’ birth, in Bradford, in 1862. I think that gives me a good enough reason to celebrate their wonderful work. I will be performing Ireland’s Cello Sonata in G Minor and Delius’ Caprice and Elegy, Romance and Cello Sonata.”

And Lloyd-Webber will also be listening out for the football scores before taking  to the St Asaph stage hoping his other great passion – Leyton Orient Football Club, have managed a win. He said: “I know it’s sad but somehow a football club can get into your soul. I was taken to a match at the O’s when I was about 11. I think it was in 1962, the year Orient enjoyed their one and only season in the top flight. They were beaten heavily week in and week out and I suppose I felt a bit sorry for them. The problem is it turned into a life-long passion. I do go to as many games as I can but sadly Saturday’s is more often than not a concert day. And as much as I enjoy watching the Orient, music will always comes first.”