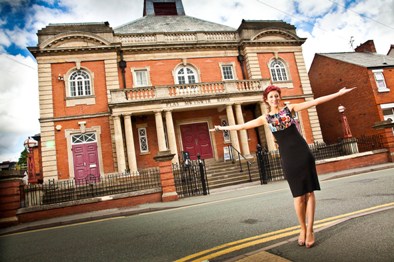 A North Wales theatre was alive with the sound of music thanks to singing sensation and West End star Connie Fisher who also had a pop at Simon Cowell. The Welsh songstress and actor berated the powerful TV mogul during a visit to the Stiwt Theatre in Rhos, near Wrexham. She was there to present a free community event which saw local schoolchildren working with some of Sinfonia Cymru‘s young professional musicians.

Connie, 28, who won the hunt for a star on the BBC’s How Do You Solve a Problem Like Maria? to land the lead role in Lord Andrew Lloyd Webber’s massive West End show, The Sound of Music, was unhappy that the X-Factor supremo belittled the alleged lack of talent in Wales.

She said: “I remember Simon Cowell saying a few years ago that there is no talent left in Wales. All I can say is what a load of absolute rubbish! I have travelled the UK taking The Sound of Music to just about every major theatre and believe me there is nowhere as beautiful as Wales. And it’s crammed
full of talent too.”

Connie  was also highly impressed with the Stiwt describing it as a “wonderful theatre”. She said: “The acoustics are fantastic. That‘s one of
the real pleasures of getting out and about around Wales, I get to visit lovely theatres such as The Stiwt. And I really enjoy being involved with Sinfonia Cymru. I am a big supporter of the Welsh National Opera and know the conductor, Gareth Jones, really well. I was asked to represent them and that‘s how I got involved with Sinfonia Cymru. It’s fantastic, I get to come to gorgeous theatres such as the Stiwt and basically get a younger crowd to listen to, and hopefully become interested in, classical music. These are free community events and are so worthwhile, I really enjoy them.”

The event was something of a curtain-raiser to Sinfonia Cymru’s chamber orchestral concert performance at the Stiwt Theatre on Thursday, July 14. And Connie, who grew up in Haverfordwest, Pembrokshire, says the concert is a wonderful introduction to classical music despite the fact, as it’s a chamber concert, only a small number of musicians are involved. “The concerts are really intimate and you can really appreciate and get a feel for the music. I’d encourage anyone to go along and try something different if you haven’t listened to orchestral music before.” 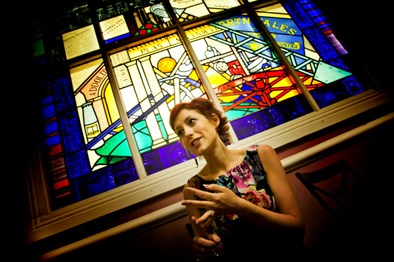 And Connie says she has Welsh National Opera conductor, Gareth Jones, to thank for her and her husband getting together after they met on a railway station platform. “I got married, last September and am deliriously happy,” she said. “However, getting together with my husband, Jeremy Reed, was far from easy. And yes, we really did meet on a railway station platform. In fact it was Cardiff‘s Platform 1. I was sitting on a bench waiting for my train to London and this guy spoke to me. I didn’t look at him at first but when I did I thought he was gorgeous. We spoke for about seven minutes before my train came. Jeremy was also travelling to London but his ticket wasn’t valid for my train. He’d been playing golf with Gareth Jones, who I didn‘t actually know at that time. I got on the train and was kicking myself for not exchanging phone numbers. In fact I hadn’t got a pen with me and was going to use lip gloss to write my number down until I realised I only had clear lip gloss with me!”

Connie, who at that time had just finished her role of Maria in the Sound of Music and was playing alongside Alistair McGowan in They’re Playing Our Song at The Menier Chocolate Factory Theatre, London says she couldn’t get Train Man, as she nicknamed Jeremy, out of her mind. She said: “I drove Alistair mad. I didn’t know the man’s name I had met on the platform but I just couldn’t stop thinking about him. I remember one night Alistair came running down the corridor behind the stage at the theatre with a huge bouquet of flowers for me. We were both excited and thought Train Man had come good. In the event the flowers were from Lord Andrew Lloyd Webber. I was so disappointed! I swore from that moment that Train Man was history and I would put him out of my mind.”

However, little did Connie know but international banker Jeremy  was doing his own detective work. Connie explained: “Apparently Jeremy was as disappointed as I was that we hadn’t exchanged phone numbers. He knew I was in a show and had been on TV so he asked Gareth Jones if he knew who I was.  Eventually  Gareth worked it out and showed Jeremy a picture of me and asked if I was the girl on the platform. Jeremy said it was so Gareth rang Bryn Terfel and asked him to contact me. Needless to say I was thrilled when Bryn explained he was ringing me as a favour for a friend of a friend. Jeremy and I quickly got together for dinner and just as quickly we fell in love. We got engaged in July 2009 and were married, at St Donat’s Church near our home in The Vale of Glamorgan last September. So you see, fairy tales really do come true!”

Happily living in her beloved Wales, Connie says she hasn’t really had time to  think about a return to the West End stage. She said: “I am just really enjoying being married and cherish living in the Vale of Glamorgan. I have just presented Cardiff Singer of the World alongside Tim Rhys-Evans for the BBC which I enjoyed immensely. I have also recorded a show for the BBC called Connie’s Musical Map of Wales which will air later this year. I thoroughly enjoyed making the show as it gave me a chance to get around Wales and listen to some fantastic singers”.

And Connie still has to take to the stage a few more times to play Maria when the Sound of Music returns to Cardiff’s Millennium Centre between August 23rd and September 3rd , although she isn’t scheduled for every performance. “I’m looking forward to it as playing Maria always gives me a real buzz. I also really enjoy presenting my weekly show on BBC Radio Wales. In fact I want to do more and more presenting if the right opportunities come along. And if any opportunity that does come along means I have to travel I don’t have a problem with that. However, I will always look forward to coming home to Wales.”

And she adds, with a sparkle in her eye: “I have achieved one dream, you never know, perhaps it will soon be time to achieve another and produce a few little
Von Trapp’s of my own.”