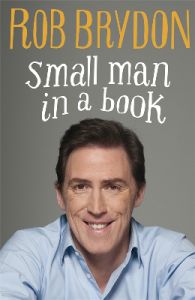 Welsh comedian Rob Brydon is coming home to Swansea to start a nationwide signing tour of his autobiography Small Man in a Book. Publisher Michael Joseph describes it as “a funny, heartfelt, honest, sometimes sad, but mainly funny, memoir of how a young man from Wales very, very slowly became an overnight success.”

It tells of his early life growing up in Baglan, Port Talbot, and memories such a the time he once stole the lunch money off a fellow pupil at Swansea’s Dumbarton House School, Catherine Zeta-Jones, and appearing alongside future Gavin and Stacey co-star Ruth Jones in a show at Porthcawl Comprehensive. Rob Brydon launches the tour with a visit to WH Smith’s at the Quadrant Centre in Swansea at 1pm on Sunday, October 23.

Perhaps best known these days as Uncle Bryn in the hit show, Gavin and Stacey, Rob is one of Britain’s favourite entertainers. A multi-award winning actor, writer, comedian and presenter, Rob is very much at home on our screens in living rooms across the country. But he took his time in making it big and experienced more than his fair share of low points along the way. Rob’s childhood in South Wales was a happy one, often spent playing with naked Action Men (he is now aware of the potential homoerotism of this past time…). Finding he made a bigger hit with girl’s Mums than his teenage crushes Rob doesn’t shy away from admitting the letdowns and knockbacks he endured as a young lad. His first kiss was a stage one and, perhaps unsurprisingly, it was around this time that he realised how much he enjoyed performing. 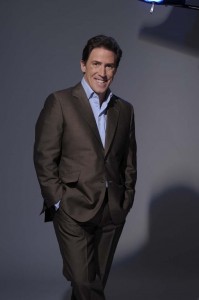 Finding himself at drama school and avoiding the partying (Rob was a teetotaller until his mid thirties) he didn’t quite have the focus and drive of some of his peers. Rather than wax lyrical about student life, Rob admits his weren’t the best days of his life because he had no heating, no decent food and no sex. He openly writes about the awkward sexual encounters and admits to buying slip-on leather shoes as a mark of respect when first meeting his new girlfriend’s dad. Old before his time or not, Rob believed in his potential to entertain and kept at it.

Before long Rob’s hearty burr was heard on Radio Wales and he soon became the voice of just about every household brand in the country – if appliances could talk they would talk like Rob. With all the ads, he knew he could do funny voices very, very well. But he also knew he could sing. And he could act. And he could write scripts. All he had to do was get other people to realise. So Rob persevered. From emulating Springsteen as a teen to insulting Pinter as an adult Rob Brydon’s autobiography is as intriguing as it is triumphant. Written by Rob himself, Small Man In A Book chronicles the life of a young chap from Wales and how he very, very slowly became an overnight success.