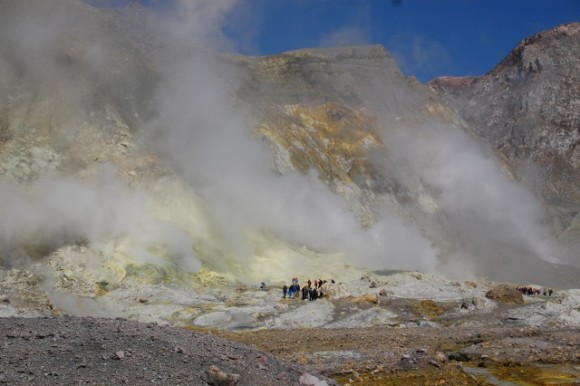 According to our ship’s guide, (the totally unflappable) Keith Springer, it was just “a typical sea lion standoff”. But it certainly didn’t feel that way. We were on a cruise of New Zealand’s sub-Antarctic islands and had dropped anchor at Enderby Island for a short walk, when a territorial bull gambolled off the beach at an alarming speed and plonked himself, belligerently, in my path.

The first thing that entered my mind was what our expedition leader, Jose Restrepo, had said when we first met: “sometimes things can get a little hairy.” He’d actually been talking about the weather. Now, it seemed, I had the region’s wildlife to worry about too.

At least I could be grateful for one thing – I’d attended the sea lion lecture, so I knew, theoretically, what to do – that is, I wasn’t to move. If I ran, the bull would follow, thinking it a game. And I definitely didn’t feel like playing.

Apparently, a fellow walker said that at this point I made a growling noise and dissolved into a “sheepish grin” (I’ll deal with him later).  I don’t remember the grin. But I do remember the shock when the 500kg bull kept coming towards me (hadn’t he read the rules?), the disturbing sight of his exceptionally sharp teeth and the relief when Keith appeared and offered to act as a distraction. Unsurprisingly, I let him.

The sea lion encounter certainly added a frisson of excitement to my 16 day cruise on Silversea’s Silver Discoverer, although with hindsight, the first time I spotted a wandering albatross would probably have served just as well…

We were sailing from Auckland to Dunedin via the Antipodes, Snares, Bounty, Campbell and Auckland Islands – remote outcrops which lie, almost in a curve, to the south and east of New Zealand.

The outposts offer plenty of (non-confrontational) wildlife encounters and some bleak and beautiful landscapes. Silversea tops it all off with fine dining, personal butlers, cocktails and champagne. The Silver Discoverer takes 120 passengers, but with just 85 of us on boat and a crew of 105, we were very well catered for.

In fact, it was luxury the moment I arrived in Auckland, as I spent the night before dining, rather sumptuously, at The Sugar Club at the top of the city’s iconic Sky Tower, a viewing platform with bars and a restaurant. It took just 40 seconds to reach on the 53rd floor – 192m (629 ft) over the city – where a white rum and redcurrant cocktail sorted out the vertigo and got me in the mood for dinner. The Sugar Club is run by the award-winning Kiwi chef Peter Gordon who’s known for his fusion food. (He also created the menu for Air New Zealand where dishes include seared tuna with papaya salad, and sesame glazed cod with ginger and pineapple salsa). I enjoyed pacific scallops with roast cauliflower and dined overlooking the city, where the Silver Discoverer glinted in the harbour below.

The next morning, we set sail. Our first stop, on day 2, was White Island, New Zealand’s oldest, active volcano. It reminded me of a bomb-site: an ashy, empty terrain hissing with steam. Melissa, our guide, handed out precautionary gas masks. The air was heavy with sulphur and the ground crunched underfoot. We hiked towards the centre of the island, where a crater lake “four times more corrosive than battery acid” threw up so much smoke I was forced to turn away. At the jetty there was an abandoned sulphur mine, closed in 1910 after a mudslide claimed 10 lives.

Back on the Silver Discoverer, it was a different world: hot hand towels, welcome champagne (all on board drinks were free) and a butler to clean my boots. We sailed towards Chatham Island. The onboard team of experts – geologists, historians, ornithologists and marine mammal specialists – gave lectures, but I spent most of my time on deck where seabirds rode our slipstream.

As we crossed Chatham Rise, an underwater ridge known for its abundance of marine life, a pod of sperm whales appeared. “Four or five blows, 600m away, at 1 o’clock,” Olive Andrews, the whale expert cried. “Blow at 400m! And again!” There were oos and ahs from the crowd. I scanned the water but the ocean was vast and I wasn’t entirely sure where 1 o’clock was. “Albatross at 11 o’clock,” someone added. “Mollymawk at 2,” shouted another. “Don’t get distracted by the birds,” Olive whispered. “The whales, have you seen them?” I desperately wanted to say I had. But although the mammals are around 11 metres long, I couldn’t spot them in the swell or distinguish a blow from a breaking wave. Someone provided a point of reference – an unusual shaped cloud. I dropped an imaginary line down to the sea and spotted what everyone was ah-ing about – a raised fluke as the whale dived.

Later, I learnt that sperm whales can reach a depth of 3000m. They have collapsible rib cages, lungs the size of a small car and can hold their breath for around 45 minutes. Their blows (the ones I failed to spot) are around 5m high.

That evening, the birds were back. Albatross, with cartoon-like eyes, soared across the stern. Mollymawk (a smaller species of albatross) came close, tilted their wings, then swooped away. Then a wandering albatross with a spectacular 3.5m wingspan, joined the throng. The birders went into a frenzy.

Talk turned technical: pale irises, white chins, white caps and thin black lines that divide the upper and lower mandible (not beak, for heaven’s sake). I decided it was time to take myself off and delight in the prions: tiny black and white birds that danced quietly over the waves.

At Chatham Island, we hiked along a river bed among giant ferns, their rounded tips the size of tennis balls. The birders spotted the endemic Chatham Island pigeon. It didn’t excite me much, (it didn’t seem to look any different from a wood pigeon) although I liked the way its purple feathers shimmered in the sun. I walked to the church, a hut with a handful of pews, and through the village – a few houses, a general store and a garage with a single petrol pump. On the beach I met a woman who told me she’d only left the island once in 15 years. “The mainland’s too busy,” she said. From then on, our destinations also got more remote.

On day 7, as we approached the Bounty Islands, named by Captain Bligh just months before the famous mutiny, the weather turned. Winds hit 60 kmph; rain lashed the decks. Bounty’s granite outcrops dissolved in mist and a blizzard of birds.

At dinner, a 6m swell sent us sliding on our chairs, holding aloft what Pinot Gris we can. The ship rolled and creaked all night.

The morning brought brilliant sunshine and the Antipodes. We launched the zodiacs (rigid inflatable boats) and chugged into caves beneath basalt cliffs. Seaweed swirled round the rocks like Medusa’s hair. On a shingle beach, fur seals showered under a waterfall.

At Campbell Island, New Zealand’s southernmost outpost, we hiked across a windswept plateau. There, in the bleakest of conditions, we came across the hardiest of birds, the royal albatross, nesting among tussocks and yellow cone-shaped bulbinella flowers. The birds lay one egg every four years.

Day 11 took us to Enderby and my sea lion encounter, and rough weather meant we had to miss the Snares, our last sub-Antarctic stop. It was good to reach the more sheltered waters of New Zealand’s fjordland where we sailed up Dusky Sound, surrounded by temperate rain forest. We lowered the zodiacs and explored inlets, spotting fjordland penguins bombing across the water, fur seal pups peeping out, meerkat-like, from behind slippery rocks, and a seal that rolled round and round in the water, oblivious to the host of long lenses trained on its antics.

On our penultimate day we called at Ulva Island where a small group of us joined conservationist Kari Beaven who’s working to protect species that have been lost on New Zealand’s mainland. We strolled through a forest of 1000 year old rata trees, umbrella moss and tiny white orchids, spotted a rare kaka (a type of parrot) and minutes later come across a flightless weka (a bird more endangered than the kiwi) which trundled out of the bushes towards us. As we made our way back to the zodiac on the shore, Kari crouched down and cleared a small patch of soil, exposing the damp roots of the forest. She tapped the ground, imitating rain. A Stewart island robin appeared. We paused to watch him. “If you don’t have time to spend with this guy, how are you going to know how to look after him?” Kari said, as the tiny black bird came closer. The robin cocked its head and jumped happily around at our feet. It was a charming wildlife encounter and one I don’t feel any need to run away from!

Find out more about New Zealand