Cultural Kanazawa in Japan, famed for gold leaf and geishas is ready to take on Tokyo. 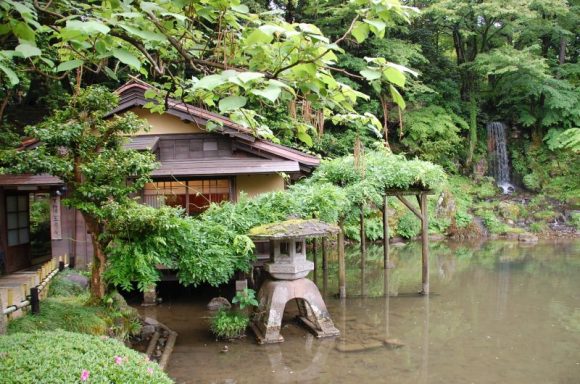 Cultural Kanazawa: A new bullet train link means the Japanese city of Kanazawa, famed for gold leaf, geishas and its Kenrokuen garden, is ready to take on Tokyo. Karen Bowerman pays it a visit.

“Do you have time?” my guide, Tomoko Kawabata asks, “Time to see more?”  We’re hurrying through the back streets of Kanazawa, a sprawling city on the Sea of Japan. Tomoko, from the tour operator, Inside Japan, is on a roll, keen for me to see as much of her hometown as I can. I’m due to catch the Shinkansen (bullet train) in a couple of hours but I can hardly refuse.

She wants to introduce me to Kanazawa’s only parasol maker, 91 year old Hiroshi Matsuda, whose workshop is in an alleyway near the Sai-gawa river. We find him, cross-legged, on the floor, surrounded by triangles of decorative washi (traditional Japanese paper) and pots of tapioca glue. Racks of parasols line the walls. He opens one to show us; it has a bright red canopy and coloured threads woven through the stretchers inside. We have a saying in Kanazawa, Tomoko says.  “You can forget your lunch but not your umbrella. You’d be surprised how heavily it rains.”

“But my parasols are strong,” Hiroshi interrupts, “much stronger than those made in Tokyo!”

Kanazawa, in the Ishikawa prefecture on the main island of Honshu, Japan, was once the main rival to Tokyo. But under the city’s ruling Maeda family in the 17th century, it abandoned politics for the arts. In the end, the city didn’t suffer too badly; it built up a rich cultural heritage and is now famed for gold leaf, lacquer ware, porcelain and pottery. And with a new bullet train halving journey times from the capital to two hours, it seems it’s ready, once again, to take on Tokyo.

Tomoko and I begin our day in the Higashi Geisha District, in the northwest, among wooden houses with slatted windows and overhanging balconies. We visit a former 1820s ochaya or tea house, now a museum, where geishas used to entertain clients. Within minutes of arriving, the owner appears – Tomoko seems to know everyone. The security rope’s dispensed with and I’m encouraged to try a set of ceremonial drums which geishas play and dance to. I feel rather self-conscious – sitting in an alcove banging such beautifully-preserved instruments as tourists tiptoe across tatami matting in front of me.

Later, as we wander round the small, austere rooms, there’s the sweet smell of incense. Tomoko explains that in the 19th century, time spent with geishas was measured by burning incense sticks. I ask what it’s like today (there are still 40 geisha in Kanazawa). “It’s not easy,” she replies. “You’re expected to have a whole range of accomplishments – to play an instrument, dance, serve tea, read the Financial Times and quote poetry. But the older you are, the more you’re appreciated. In the geisha world, it’s better if you’re older because you’re considered more refined.”

Nowadays, geisha evenings are exclusive events usually hosted by wealthy Japanese businessmen. But the city, keen to keep the profession alive, has endorsed various ochaya where geishas perform for tourists. It’s still expensive, costing more than £1000 for a small group. (If you want a private meeting it’s likely to cost at least £250 per geisha, plus up to £150 for a meal). The performing arts is just one of Kanazawa’s cultural attractions, but it’s perhaps most famous for the production of gold leaf.

Just down from the geisha house I watch a woman at work in an artisan boutique. She slices a micro-thin sheet of gold with a cutter, arranges it with tweezers and blows gently. It ripples like water as it falls into place. The shop sells ornamental tigers and dragons (prices range from £600 to £10,000) plus ice cream, sweets and sushi flecked with gold. It even has a gold cloakroom!

Kanazawa’s other famous attraction is its 17th century Kenrokuen garden, officially recognised as one of the top three Great Gardens of Japan. We wander through plum trees (plum blossom was the Maeda family crest) and over bridges spanning streams of blue irises. Southeast of the city centre is the Nagamachi district where mud-walled buildings with tiled roofs skirt the Ohnosho canal. The district is where the wealthy samurai lived. The restored home of the Nomura family, one of the most powerful in the region, is open to visitors. The house has shoji (sliding rice paper doors), lattice screens and an engawa (narrow verandah) overlooking a small garden. Centuries ago, it also would have had extra layers of tatami matting to prevent assassins from crawling beneath and trying to stab the owners through the floor!

But the highlight of the day, largely for its quirkiness, is the so-called Ninja temple (Myoryuji) although it had nothing to do with ninjas. It got its nickname from the labyrinth of corridors and stairwells added to outwit attackers. The building doubled up as a military outpost, although the Maeda family also used it for prayer. “Welcome to a temple of tricks” our guide says, revealing hidden staircases, trap doors and secret tunnels. She also shows us the suicide chamber where the lord’s samurai were expected to kill themselves rather than admit defeat.

The room has a subtle reminder as to its purpose, with just four tatami mats (the number that represents death) on the floor. Luckily, however, the temple never came under attack. We leave feeling a little sombre but Tomoko can’t be downbeat for long. It may be 5pm, the official end of my tour, but fired with enthusiasm, she’s keen to show me more. This is how we come to be running through the backstreets to the workshop of the parasol maker – and why from here, I find myself racing to the station to catch my train. I do so with just seconds to spare, which is just as well, as the country’s Shinkansen, famed for their punctuality, won’t wait for anyone – not even those who want to eke out every second in a city as colourful as Kanazawa.

Inside Japan Tours Tel: 0117 244 3263 offers small group tours, self-guided holidays and bespoke private journeys across Japan. Its 14 night Traditional Japan trip includes a 2 day stay in Kanazawa, travelling on the new bullet train from Tokyo. It also includes stays in Tokyo, the craft town of Takayama, the thatched houses of Shirakawago, the castle town of Matsumoto, Tsumago walking trails and cultural Kyoto. The 14 day trips costs around £1,710pp and includes all accommodation, transport between destinations, meet and greet airport transfers and private guides in Tokyo and Kyoto. Flights can also be arranged. CLICK for more on Kanazawa

Ninja Temple (Myouryuji)  – Tours in Japanese (although English guide books are offered) run every 30 minutes from 0900-1630. During winter the last tour is at 1600. Reservations have to be made in advance. You must arrive at least 10 minutes before the start of your tour. Adults 800 yen, children 600 yen