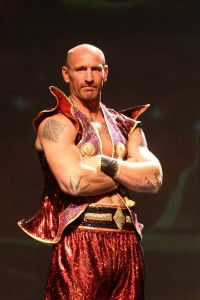 Welsh rugby legend Gareth Thomas believes that coming out as being gay was the greatest thing he has ever done. He says he is constantly being told how the example he set by doing it has helped other men struggling to be open about their own sexuality. Gareth, who captained Wales in 2005 to their first Grand Slam victory since 1978, also skippered the British Lions tour of New Zealand and then switched codes to play for the Wrexham-based Crusaders Rugby League side. He retired game last year and his remarkable story is now being made into a Hollywood feature film with Oscar nominee Mickey Rourke as star. Before then, he is making wishes come true, starring as the genie in a pantomime production of Aladdin. at the Stiwt Theatre, in Rhos.

Gareth will be swapping Aladdin’s lamp for a globe when he and fellow members of the cast come to the Eagles Meadow shopping centre, in Wrexham, at 10am next Monday (December 10). They will be there to officially open a giant Snow Globe which will give shoppers the chance to have their photograph taken against a picturesque winter backdrop. Gareth and the gang will also be putting the globe to the test by staging a last-minute dress rehearsal before the production starts for real at the Stiwt the day after.

The clear PVC globe, which is making its first appearance in North Wales, stands over 13ft tall and measures around 10ft across. Realistic-looking snow, of the same type used on Hollywood movies, is pumped around it by a large fan and flutters down  just like the real thing to coat scenes such as a winter-time forest and a Cinderella tableau. People enter through a special chamber at the rear and once inside can pose for seasonal pictures – and play around in the snow.

Ian Hutchinson,  from Hertfordshire-based Photographic Synergy which has been operating the globe in the UK since 2008, said: “Basically, it’s like one of the traditional hand-held globes which you shake up and snow falls inside – only this is much bigger and a lot more fun. We’ve had it in various locations across the UK, such as Hyde Park in London, over the past four years and it always goes down a storm – or a snowstorm, you might say – because people have never seen anything like it before”. 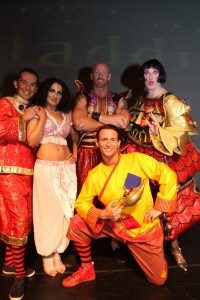 Eagles Meadow Manager Kevin Critchley was delighted that Gareth and other members of the cast had agreed to do the honours and give shoppers a sneak preview of the panto fun. Kevin said: “Gareth is a true Welsh icon. He was as fierce as a lion on the rugby field and has show immense courage and dignity since he came out as a gay man. The panto is obviously a new departure but I’ve heard that rehearsals are going really well and that he’s hilarious as Aladdin.”

Gareth  considers Wrexham to be his “second home”. He said: “I am also delighted to be back in Wrexham which I know well after spending time playing for the Crusaders. It’s a very friendly area and while I’ve been back doing the panto rehearsals and staying at a local hotel people have been coming up to me to wish me well. I also know Eagles Meadow very well. It’s a great shopping centre and I know people are going to have a lot of fun in the Snow Globe.”

Taking a break from learning his lines, Gareth – known affectionately in his playing days as “Alfie” – recalled how he dropped a bombshell when he “came out” as gay in 2009 after years of living as a straight man married to his teenage sweetheart.  At 6ft 3ins, 16st and 100 caps to his name – more than any other player in Welsh history – he also had one of the fiercest reputations on the field. But he says he hasn’t looked back announcing his gayness and is constantly asked to give advice to other men on how to be as honest about their sexuality as he has been.

He said: “While I don’t want my being gay to be the defining thing in my life and career, I think that for me personally coming out was the greatest thing I have ever done. I know for sure I have helped other guys because I am alsways hearing through the social media and in letters that I’ve helped somebody’s son, brother or father to come out. The message I give to everyone is that if I can do it, anybody can do it. I am just glad that what I have done is helping other people.” 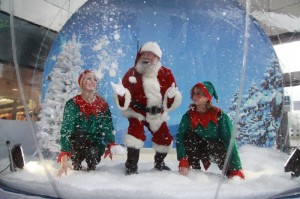 Gareth said that since retiring from rugby just over a year ago he had been enjoying himself with all sorts of work projects, and appearing in panto was the latest example of putting his abilities to the test. He explained: “Since retiring from the game I like to set myself new challenges all the time because I think the fear of the unknown can be exciting. As kid in Bridgend I always went to see pantomimes but I never dreamt that one day I’d actually be in one. I think this is a good way to start off in the world of entertainment because it’s certainly not too heavy and our aim is to get people in the Christmas spirit and to send them home with their sides aching from laughter. I’m really looking forward to being the Genie of the Lamp and working with the rest of the cast who have all been great and are helping me with my first time on stage.”

Although Gareth will plunge straight into another project when the Aladdin run ends early in the new year, he says he isn’t allowed to reveal exactly what it is or even whether it’s show business related. And, like a number of other famous rugby players have, would he ever consider appearing on Strictly Come Dancing? He said: “At the moment all my energy is being put into the panto and I don’t want to think too far into the future but it’s a case of never say never.”