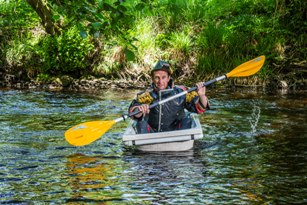 The bizarre sport of bathtubbing, enjoyed by TV stars Rory McGrath and Will Mellor, comes to  North Wales next month, with the World Championships. The All Wales Boat Show is following  in the footsteps of  Christchurch in New Zealand in hosting  a round of the quirky  contest. Entrants are expected from around the world for the competition – described as kayaking in a bath. Three days of practice runs will  allow entrants get their  sea-legs, with the contest itself on Saturday July 27.

It’s one of the many attractions at the All Wales Boat Show, which runs from  July 24-28. Split between Conwy and Deganwy Quay marinas, the event will see visitors ferried across the River Conwy from one harbour side to the other. There will be a range of craft on show, plus the chance to try out some of the equipment on sale, along with a variety of events and entertainment.

Davina Carey-Evans, managing director of management and marketing specialists Sbarc , which is organising the Show, said: “The bathtubbing promises to be extremely wacky and a lot of fun. “It goes to show that we will have the whole range of boats at the show, from yachts fit for millionaires to bathtubs and everything else in between.”

Water sports enthusiast and instructor Tony Bain, who runs Green Dragon Activities in Llanwrtyd Wells in Mid Wales, came up with the madcap idea to complement the off-beat events held regularly in the Cambrian Mountains town,  such as the annual bog-snorkelling and man versus horse contests. The New Zealander’s company also offers Akwakats – kayaks powered by bikes on rivers and canals –  along with mud wrestling and paddling in wheelie bins.  In the last series of BBC’s  Great British Menu, renowned Welsh  chef  Mary Ann Gilchrist was seen taking part before trying out some of her recipes on fellow paddlers. 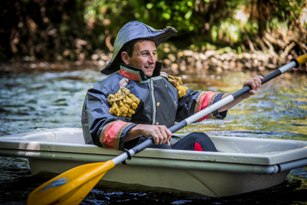 Last year’s Championships also included a round at Cardiff, when Rory McGrath and Will Mellor took part for their Channel Five  show Champions Of The World. Tony said: “To be honest, neither of them stayed in the bathtubs very long, although most people manage OK: it’s basically kayaking in a bathtub. We use an ordinary bathtub – with the plug in, of course. We just add an extra ring around the edge to make it easier to get it back out of the water, after it sinks. It’s a series of time trials, the fastest around the course is the winner. Well, everyone’s a winner really – for once in your life you are meant, and even allowed, to keep the water on the outside of the bath. The idea came to me when I met up with friends in the pub, who were trying to think of a new off-beat activity. In this town, daft is normal! It’s really taken off though, and people love doing it. We are expecting a lot of entrants from all over the world, and they will have three days to practise before the contest itself. I believe  the setting in North Wales, and the show combined with the Conwy River festival,  will attract a lot of people to give it a try. The World Bathtubbing championships and the All Wales Boat Show will give people a chance to see that watersports are for everybody, no matter whether you can afford a bathtub or a millionaire’s yacht.” 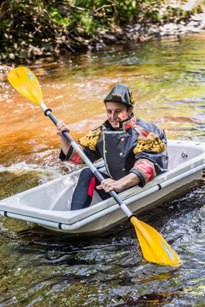 Tony is also encouraging entrants to raise funds for their favourite charity through sponsorship. Enter by e-mailing greendragonactivities@gmail.com. The next rounds in the contests are being held later this year in Cardiff and the Cotswolds.

Davina Carey-Evans  added: “This is the first ever National Boat Show for Wales and what’s interesting is how far and wide the exhibitors are coming from – from all across the UK, Ireland and mainland Europe. We believe the timing is perfect, too, because it’s taking place the same time as the Conwy River Festival. Two million adults in the UK enjoy water-based activities and the marine sector generates £66.7 million in Wales alone. Wherever you go in Wales, you are never far away from a river, lake or coastline which is why it’s renowned for not only offering every water sport activity possible but also some of the very best facilities to do so, so it is only fitting that we have our own boat show. Conwy boasts two marinas and a reputation for outstanding water sport amenities.  It is also a major tourist attraction in its own right being a world heritage site with its own medieval castle so is the perfect location for a show of this stature and size. And with its easy accessibility whether by car, plane, train or even boat, it will appeal to a wide target audience from not only all of Wales but also the North West, Midlands, Isle of Man and Ireland.”