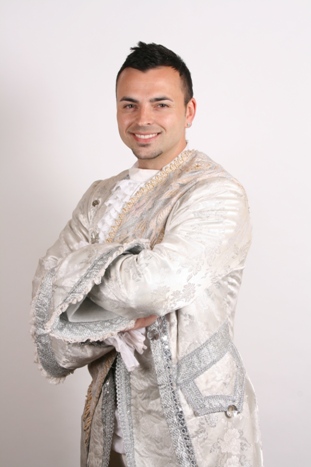 Appearing in pantomime opposite one of Hollywood’s biggest stars was an experience Andy Scott-Lee will never forget. And while Tinsel Town legend Mickey Rooney might not be in the cast for this year’s pantomime, Cinderella, at the Stiwt Theatre, Rhos, heart-throb Andy is set to once again have female hearts fluttering as he tackles the role of Prince Charming.

It was back in 2008 that the former singer 3SL and Pop Idol contestant Andy Scott-Lee played Prince Charming at Sunderland’s Empire Theatre. He starred opposite Liberty X singer, and former wife, Michelle Heaton, while the legendary Hollywood star Rooney played her dad, Baron Hardup, in what was his pantomime debut. And Andy says he’s delighted to be back playing Prince Charming especially as this year he’ll be back in his native North Wales.

He said: “Working with Mickey Rooney was just magic. He was in his late eighties then and he’s still working now, in his nineties, by all accounts. He was such a professional and just really enjoyed performing. He gave me so much advice and really taught me so much. I think that’s why I love panto so much, its so much fun and I can’t wait to get on stage at the Stiwt. It’s hard work, really hard work, but just brilliant to be involved. And we have a great cast too, even if Mickey Rooney isn’t part of the show.”

Andy says he is looking forward to working with Alison Crawford who reached the final of the 2007 reality TV show Grease is the Word and Big Brother 9 contestant Dale Howard, who will play Dandini – not to mention another Big Brother favourite, Nicky Grahame, who will be dispensing plenty of sparkle as the Fairy Godmother. Andy said: “Alison will make a fabulous Cinderella. She played the lead role of Snow White at the Stiwt last year and was brilliant. At every performance the audience took her to their hearts and she quite rightly earned some really good reviews. Personally, this will be my fifth year doing panto and every year I enjoy it more. It’s always so much fun. We get the script about a month before rehearsals start and need to know our lines as time is of the essence. Once rehearsals start it’s pretty full on right up until the closing performance in early January.”

And Andy says Cinderella surely has to be the best pantomime of all. He said: “It’s everyone’s favourite isn’t it? The story is just perfect and of course each show has its own little twist or two. That’s why it is always so fresh and it’s never predictable.  Of course it’s the comics that keep the show together. They need to keep it fresh and fun and keep the laughs coming throughout. This year we have Richard Wood playing Muddles, and believe me, he is hilarious. We also have Steve Davies and Michael Chapman, who are also both very funny guys, playing the Ugly Sisters.”

Nowadays Andy lives in London but he’s relishing the chance to work back in  his native North Wales. He said: “Coming from Rhuddlan it’s always nice to come back and work near home and the Stiwt is a gorgeous theatre steeped in history. I have been very lucky to have been kept so busy. It’s a long time since I was a member of 3SL and eight years since I did Pop Idol but the work has never dried up. I seem to do a lot of gay clubs and Gay Pride festivals for which I’m very grateful. I’ve also recently worked on a Caribbean cruise which was another great experience. It was a bit rushed though as I flew out to Barbados where I joined the ship. I disembarked at St Vincent’s three days later after performing and flew back so it was certainly all work and no rest!”

And Andy says thanks to sound financial advice he invested his Pop Idol earnings wisely and now has a property portfolio which he says will secure his future. He said: “The trouble is at 31 I’m getting on a bit so far as the music industry is concerned. I’m now looking for a publishing deal as I enjoy writing songs. Writing can be very lucrative especially if you write someone a big hit. I am also still doing the occasional gig with my sister, Lisa Scott-Lee, who was with Steps for five years.  Steps are actually getting back together which is nice but I do enjoy teaming up with Lisa to perform especially as we have our dad as a tour manager, even though he‘s a bit of a slave driver!”

And Andy says his personal life is now much calmer following his highly publicised split from  former wife Michelle Heaton. He said: “I’ve settled down and have a partner of more than three years. I suffered at the hands of the paparazzi when Michelle and I first split and now never make any comment. Those days are behind me and I am now happier than I have ever been.”

And although he enjoys pantomime so much Andy insists that first and foremost he remains a singer not an actor. He said: “I did find it very nerve-wracking on stage playing panto at least at first. However, once you get into it it gets easier and I did get lots of advice of Mickey Rooney when I first started doing panto and that always really helps.”