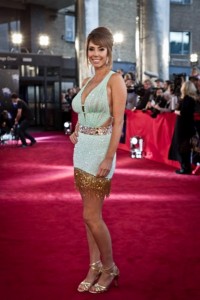 TV star Alex Jones took time out of her hectic Strictly Come Dancing schedule to spearhead a campaign to support her favourite city. The popular One Show presenter, 32, who hails from nearby Ammanford, is backing the new We Love Swansea campaign. She is one of the best known faces on UK television after taking over from Christine Bleakley on the BBC’s flagship magazine programme.

Alex and her partner, James Jordan,  have made a good start on the hit dance show. They were awarded 22 out of 40 by the judges and they scored 29 out of 40 for their  their second dance when Edwina Currie was eliminated.  One of the organisers of the We Love Swansea drive is Alan Wallace, the manager of the city’s busy Quadrant Shopping Centre. Alan’s aim is to spread the word that Swansea is a top shopping and leisure destination and a fantastic place to live and work

He said: “The campaign has got off to a great start and it’s really starting to gain momentum. I was absolutely thrilled when Alex agreed to support us even though she is so busy with her One Show duties and competing in Strictly Come Dancing. Alex’s profile is sky high at the moment and it’s fantastic that she is so supportive of what we are trying to achieve. Our aim is to tell the world what a fabulous place Swansea is – we’ve got so many great shops, places to eat and things to do. I am sure the whole of Swansea is right behind Alex in Strictly Come Dancing – I think she’s got a great chance of winning the competition.”

Alex’s television career began working for Welsh language TV channel and in 2009 she took part in The Magnificent Seven, a BAFTA-winning series which saw seven celebrities travel to a ranch in Arizona to learn how to become cowboys.  Alex went on to present BBC Wales’ contribution to the Children in Need network programme from the Millennium Stadium. She landed the One Show role last year and she hasn’t looked back since. She presents the daily magazine show from London and has become a mainstay on the channel, presenting Eurovision results and Let’s Dance for Comic Relief for BBC1 in 2011.

But Alex’s heart is never far from home and she said: “I am delighted that there is a We Love Swansea campaign because it is a very special place. I come back home to the area whenever I possibly can – though Strictly Come Dancing and the One Show are a bit all-consuming at the moment. I am really grateful for the huge support I’m getting from local people. Swansea  deserves credit for the way it has developed into an attractive and vibrant city  with a real sense of buzz and energy. I love Swansea because it’s one of the friendliest places that I know, with a lovely atmosphere and loads to do. People from the Swansea Valley are my kind of people – they are witty, warm and welcoming and they deserve to be treasured and celebrated.”